The climate crisis has reached new levels of devastation this year for millions of people in vulnerable countries that didn’t cause the problem. Floods in Pakistan, drought in the Horn of Africa and hurricanes in the Dominican Republic — all intensified by climate change — have ruined people’s livelihoods, causing losses so immense that it is hard for many in richer countries to even fathom.

For nearly three decades, the countries most vulnerable to climate disasters have asked wealthy countries to help them pay for the damage, only to be stonewalled.

At the annual United Nations climate conference this week, the issue is formally on the agenda, a breakthrough in itself. Encouragingly a smattering of wealthy countries, including Austria, Germany, New Zealand, Ireland, Belgium and Denmark, have started to pledge money — albeit small amounts.

These contributions are welcome, although some of the pledges reallocate funds from other pots of climate finance, or are putting money toward insurance, or early warning systems — not the kind of funding that poorer countries seek. 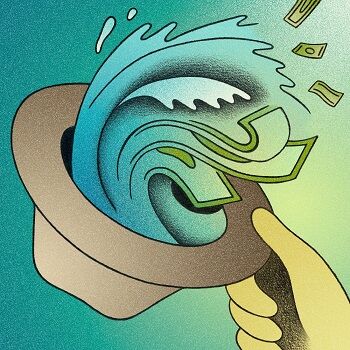 What these countries have been calling for, and urgently need, is a collective funding stream within the United Nations that helps them recover from devastating losses from disasters, rising seas and other climate impacts.

The United States and European Union must get behind this movement now. Specific details on how much money, where it comes from, who gets it and what qualifies take time to work out. But what’s critical at the current climate conference is that wealthy countries agree to a process, with clear deadlines, to pay for the damage.

It’s not a matter of charity. Taking action is firmly in rich countries’ own interests. As climate change bears down, more factories and ports around the world — the ones that wealthy nations rely on for their phones, car parts, fast fashion and even food — will close, devastating global supply chains. Food prices will rise. More people will be displaced, leading to additional migration crises. Conflict will grow more likely as people fight over land and water. The repercussions will destabilize even the most robust economies. Preventing that outcome now, by financing recovery from climate damage, will ensure a more stable future for everyone.

This kind of funding is called “loss and damage”, and it is meant to address climate impacts that people can’t simply adapt to. The concept may seem wonky, but it’s not: Loss has a name. Damage has an address.

Where do the millions in Pakistan turn now that they’ve been displaced by floods? What do small farmers in Kenya do when a prolonged drought makes it impossible to grow crops to feed their families? All over the world, people are facing excruciating decisions every day.

Rich countries generally have the resources to weather these climate impacts. In the United States last year, 54 percent of disaster-related losses were insured, compared to just 3 percent on average in the world’s 77 poorest countries.

The United States and European Union have rejected or stalled on this kind of financial assistance, raising concerns that committing funds for climate loss and damage could seem like an admission of guilt, and open the door to a flood of lawsuits. But the 2015 Paris agreement should already have put that concern to rest, since it makes clear that “averting, minimizing and addressing” loss and damage “does not involve or provide a basis for any liability or compensation”.

Some developed countries claim that humanitarian aid already meets the need. It does not. Humanitarian aid provides immediate shelter and food relief after a disaster strikes, but is not available, for example, to the Fijian islander who must relocate because of rising seas, or the fisherman in Palau whose livelihood evaporates after tuna migrate to cooler waters.

The initial loss and damage commitments are politically important. Yet the need is exponentially greater — these costs worldwide could reach $290 billion to $580 billion in 2030, according to one estimate.

A new fund to hold parties responsible could change the lives of billions of people on the front lines of climate change, offering a path to recovery where none exists today. When a cyclone hits, a government could quickly apply for funding and distribute it to help people rebuild destroyed homes. For continuing issues like droughts, the money could help farmers diversify their skills when their original livelihoods are no longer viable. But it could also improve the lives of people in wealthy countries, by building resilience to global supply chains, by stabilizing the economies where their businesses import and export goods, by creating the conditions for a more peaceful world.

As Scotland’s first minister, Nicola Sturgeon, said this week at the conference, “Countries in the Global North that have caused climate change and have the greatest access to resources have an obligation to step up”.

Any more stonewalling by wealthy nations on finance for loss and damage could derail the entire climate negotiations here in Egypt. The world’s ability to tackle climate change hinges on trust between developed and developing countries, and without concrete progress to address these severe losses and damage, that trust risks being broken.

Ani Dasgupta is the president and C.E.O. of the World Resources Institute.