When two groups are in conflict, how can you improve relations between them?

One strategy is to encourage positive personal contact among individuals from each group. If a Catholic and a Protestant in Northern Ireland would only sit down together to talk — learning about one another’s families, hearing about one another’s fears — the encounter, according to this approach, would foster understanding, humanize the enemy and lessen bigotry. The scholarly version of this idea is known as interpersonal contact theory.

It’s an intriguing hypothesis, but does it work in reality? For four years, we studied Seeds of Peace, a program that every year brings together several hundred teenagers from conflict regions such as Israel and the Palestinian territories for a three-week summer camp in Maine. The teenagers sleep, eat and play games together, and engage in daily sessions to talk about the conflict between their groups and their own experiences with it. 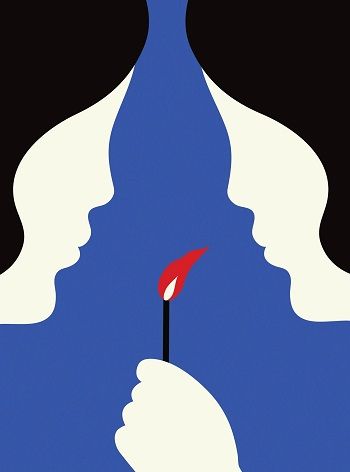 We measured how the intervention affected Israelis’ and Palestinians’ relationships with, and attitudes toward, one another. Our results, which will be published in the September issue of the journal Group Processes & Intergroup Relations, offer a glimpse of the power of forming a relationship with even just one person from the other side of a conflict.

Hundreds of tests of intergroup contact theory have been conducted in the past and have generally supported it. But most of them have lacked two elements that are critical for assessing it fully.

First, most prior studies involved asking individuals at only one point in time how often they had come in contact with individuals from another group and how they felt about that group. But this approach makes it hard to know whether contact causes positive attitudes or whether people with positive attitudes are simply the ones most likely to engage in contact in the first place.

Second, few prior studies involved groups engaged in active conflict. Personal contact may be effective in making people feel more positive about groups with which they have had little or no experience — say, rural white teenagers encountering their urban black peers — but that does not mean it will be effective for groups facing pervasive violence.

In contrast, our study was longitudinal and conducted with antagonistic groups. The teenagers who attend Seeds of Peace are selected by their government or nominated by teachers and community leaders based solely on their leadership potential and ability to speak English. Despite living so close to one another, before attending camp a majority of the teenagers in our studies had experienced only negative contact with members of the other group.

At the beginning and end of camp, the campers reported their feelings toward the other group, as well as some of their political attitudes and attitudes toward the peace process, rating their opinions on a scale of one to seven.

From pre-camp to post-camp, we found that Israeli and Palestinian teenagers alike reported feeling more positive toward, close with, similar to and trusting of the other side. On average, for all of these questions, the teenagers moved up almost a full point on the scale from where they started, a statistically significant change. They also reported feeling more optimistic about the likelihood of peace and more committed to working for peace, and they expressed a greater intention to participate in other peace intervention programs. Four different sets of campers have consistently shown the same pattern of outcomes.

Critics of such programs suggest that there is a “re-entry problem”: that any positive effect of the encounter will vanish when participants return to normal life. We therefore sent campers a follow-up survey one year after they returned home, asking them again about their attitudes.

We found the participants’ attitudes did regress over time, but not enough to eliminate a positive effect. Even a year after the camp had ended, the Israelis and Palestinians who were surveyed still felt more positive about the other group than they did before the camp.

For most contentious and violent conflicts, whether between Israelis and Palestinians or between other groups, the path to peace is likely to be long and hard. But programs like Seeds of Peace can help pave the way. Conflict may seem more surmountable when you know someone on the other side.

Juliana Schroeder is a Ph.D. candidate in psychology and business, and Jane L. Risen is an associate professor of behavioral science, both at the Booth School of Business at the University of Chicago.