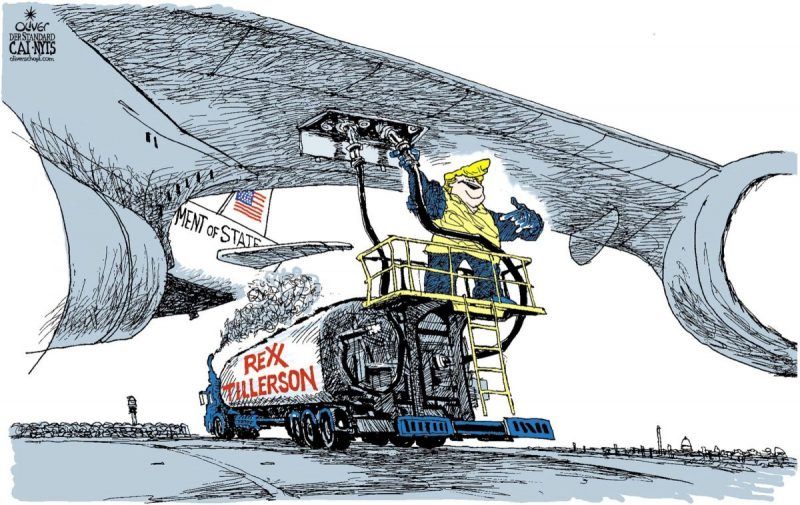 On Jan. 11 former Exxon Mobil CEO and now U.S. President-elect Donald Trump’s nominee for secretary of state Rex Tillerson was grilled by the Senate Foreign Relations Committee regarding his position on various current international issues. He was pressed by Texas Republican Sen. Marco Rubio regarding his view of recent actions by Russia in Ukraine, Syria and cyberspace. Tillerson wisely — some would say evasively — avoided direct answers repeatedly pleading ignorance and a need for more information.

He should have done the same for questions regarding China’s actions in the South China Sea. Instead he made several intemperate remarks that have alarmed China and the region, including U.S. allies. Most provocatively he said that China’s access to the features it has built up in the South China Sea is not going to be “allowed.” He added that in general “I think a lot of our troubles today are that we do not enforce — we make commitments, we say are going to do something and then we don’t enforce it”. Given these ill-advised comments and those of Trump’s actions in undercutting the U.S.-China fundamental understanding regarding the status of Taiwan, China may well think and prepare for the worst.

If the U.S. pursues Tillerson’s position as policy, it will almost certainly mean high tension, instability and conflict in the region. Some would argue that such a “blockade” would be an act of war. Worse, according to Carl Baker of Pacific Forum, it is not at all clear that the U.S. has the “maritime power to set up a blockade in the South China Sea.” But Tillerson may have already painted himself into a corner vis-a-vis China. Moreover if he is confirmed and doesn’t follow through on this statement, he may well be hoisted on his own petard of “we say we are going to do something and then we don’t enforce it”.

China would interpret U.S. attempts at denial of access to its claimed features as a violation of its “core interests” regarding territorial integrity and sovereignty. Yes, the features it has built on are claimed by others. But China’s claim to most of them is as reasonable as that of the others.(Mischief Reef which it has built upon is — according to a Hague Arbitration decision — a low tide elevation and therefore “not subject to appropriation”). China is not claiming an EEZ or continental shelf from any of these features and in its view has built up and on its own features — just like what other claimants to features in the South China Sea have done, like Malaysia, the Philippines and Vietnam.

China’s leadership has essentially staked its support and perhaps thereby its tenure on defending its territorial claims in the South China Sea. It is highly unlikely that China’s leaders would back down now. Military leaders and nationalists would not “let” them.

Tillerson also said “… we have got to show back up in the region with our traditional allies in Southeast Asia.” It appears that Tillerson thinks that U.S. Asian allies will flock to its side in case of a violent conflict between the U.S. and China. If he does think so, then he is uninformed, misinformed or wildly unrealistic.

First of all, U.S. military blocking of China’s access to its claimed features would be a violation of freedom of navigation, the very illegal act that the U.S. accuses China of contemplating and even doing. It would also essentially be taking a position on the sovereignty claims on which it has heretofore repeatedly claimed to be neutral. Further it would re-raise the question of “just who is militarizing the South Chinas Sea.” Worse it would confirm the views of China’s hawks that despite its frequent denials the U.S. goal is to dominate, contain and constrain China.

If Tillerson/Trump really think that “friends and allies” in the region will militarily back the U.S. in a fight with China, they may be sorely and sadly mistaken. Indeed, as retired Adm. Michael McDevitt has written. “Any U.S. policymaker who builds a strategy around the assumption that our friends and allies will be with us in a shooting war with China is a fool.”

Yes, some may allow their territory to be used as a staging area for U.S. attacks on China and its forces. But even this is not a given because it obviously would invite retaliation by China. If China attacks these “friends and allies” then they may do more to help the U.S., but even that is a “maybe.” Failing a direct attack by China on their forces or territory perhaps the most that the U.S. can count on is intelligence sharing and moral support.

Japan is famously and understandably finicky when it comes to taking military action abroad, particularly against China. Past leaders of South Korea have made clear they would not permit U.S. forces to operate from South Korea to participate in conflicts elsewhere in northeast Asia. The Philippines under new President Rodrigo Duterte is moving toward a more neutral stance between China and the U.S. Despite the 65 year-old U.S.-Philippines Mutual Defense Treaty, if the U.S. invoked it, it may be hesitant and look for loopholes just as the U.S. did when the Aquino government demanded assurances of military backup in case of its conflict with China in the South China Sea. Now the shoe may be on the other foot.

Even Australia has displayed deep political fissures regarding military support for the U.S. in a fight with China. As for “friends” like Indonesia, Malaysia, Singapore and Vietnam, they have much to lose physically and economically by militarily siding with the U.S. against China. In sum, barring direct attack by China on their territory or forces, U.S. strategic planners should not count on the active military help of its Asian “friends and allies.”

Perhaps the Trump administration sees war with China as inevitable and believes that “better now than later” while the U.S. has what it believes is a clear military advantage. If so it better get its political, strategic and tactical “ducks in a row.” Perhaps that is what the U.S. military is doing by sending the Carl Vinson Carrier Strike Group to the western Pacific and moving 16 top-of- the -line F35 Joint Strike Fighters to Japan in very first overseas deployment.

There is still a chance that Tillerson will realize he has overreached and “clarify” or walk-back his threat. If not, it seems the die is cast. Hold on to your hat!

Mark J. Valencia is an adjunct senior scholar at the National Institute for South China Sea Studies in Haikou, China. This piece first appeared in the IPP Review.