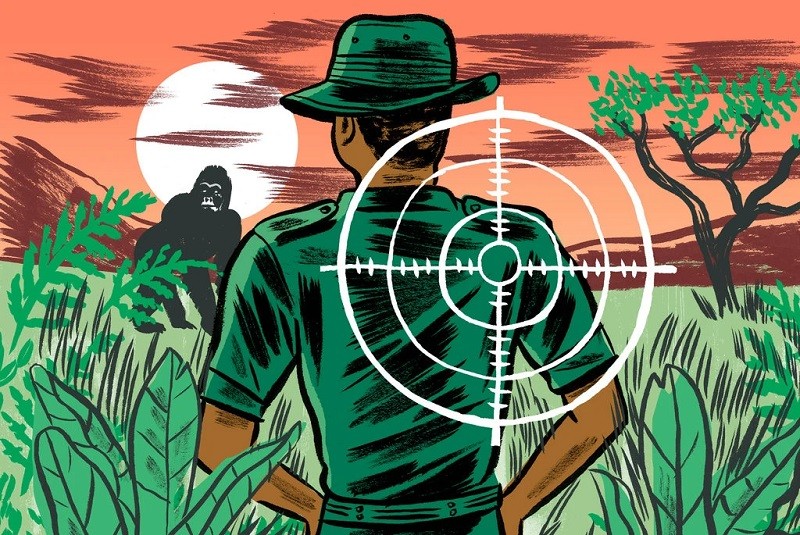 Being a wildlife ranger can be extremely hazardous to your health.

Some 110 rangers died in the line of duty worldwide in the year preceding July 31, according to the Thin Green Line Foundation. Nearly a dozen were killed by elephants in Africa and Asia, some trampled to death. One was gored by a spotted deer; two others were killed by rhinos. In India, two rangers were mauled to death by tigers; a bear killed another wildlife officer there. In Zimbabwe, yet another ranger drowned when a hippo attacked his canoe. A land mine killed a Thai officer. Ten died fighting fires.

But what is particularly troubling is this: At least 25 were killed by poachers or timber smugglers, most in Africa or Asia. One was shot and pushed off a cliff. Two were axed to death. One died when his helicopter was shot down by poachers. Most of the rest were simply shot.

And the killings by poachers continue. Just last month, for instance, a ranger in the Uganda Wildlife Authority was killed in a gun battle.

These officers represent the line between murderous profiteers and the planet’s remaining wild landscapes, the sanctuaries for some of our most endangered animals and plants. They are often underpaid and poorly equipped to defend themselves. Many lack the government and private support they need to do their jobs.

Governments and conservation groups must work aggressively to turn this situation around by providing better training and funding for these enforcement efforts. Equally important, the work by the rangers must be given the prestige and respect appropriate to the risks they undertake.

Two of the rangers killed last year, Sieng Darong and Sab Yoh, were colleagues of mine. They were murdered while sleeping in their hammocks last November in the forests of northern Cambodia, where illegal logging has become an enormous problem. They left behind three children.

The area of the attack was once a stronghold of the Khmer Rouge. Soon after that government’s fall, I was part of a team of wildlife biologists who entered and surveyed the area for the first time. We encountered endangered species not seen by scientists for nearly 40 years.

Back then, we worried about stepping on land mines and isolated acts of banditry. Today, the biggest danger is from organized and well-armed criminal groups involved in timber smuggling.

This smuggling is big business. The British-based environmental group Global Witness found that government and forest agency officials collude with businessmen to illegally cut Cambodian timber and transport it to China.

Last year, according to Global Witness, 185 indigenous people, activists and rangers were killed protecting forests around the world, a 59 percent increase over the number murdered in 2014, and the highest since the group began compiling data in 2002. In landscapes ranging from the Southeast Asian archipelago and Congo Basin to Amazonia and Central America, killings of wildlife rangers have made a mockery of the rule of law. Local people have been intimidated, making it that much more difficult to bring poachers and smugglers to justice.

What’s often forgotten is that these rangers also work to protect the people who live in and around them. Rural communities depend on the forest for food, fuel and income. After hearing about the murder of the two Cambodian rangers, a local community leader said that without them, “illegal loggers would have cut all our resin trees and we would have no income.”

No one has been arrested in the murders of Sieng Darong and Sab Yoh. But in the wake of those killings, Cambodia has taken steps to improve the lot of its rangers. The Ministry of Environment has increased the number of rangers and assigned them official government status, which provides them with the same benefits as other government officials and the esteem that goes with it.

Of course, the ultimate solution is to take the profit out of poaching and resource smuggling. This is a tough task, but progress is being made. Last year, China agreed to enact nearly complete bans on ivory imports and exports. In September the International Union for Conservation of Nature called for the complete closure of global ivory markets.

The Convention on International Trade in Endangered Species of Wild Fauna and Flora, the world’s authority on the wildlife trade, recently tightened trade restrictions on a host of threatened species that include pangolins, hornbills and all species of rosewood — the most trafficked wild product on the planet.

Congress and the president recently took an important step by approving the Eliminate, Neutralize and Disrupt Wildlife Trafficking Act, which, among its other provisions, encourages partnerships between the United States and other countries fighting terrorist and crime groups that profit from wildlife trafficking. The law enables the United States to provide other countries with intelligence, equipment and training to fight poachers.

These are significant developments. But we can’t forget the frontline troops in this battle, rangers like Sieng Darong and Sab Yoh, who are being murdered with impunity.

Governments and conservation groups must do more to provide these men and women with the resources they need to protect what’s left of the planet’s wild heritage.

Joe Walston is the vice president of field conservation for the Wildlife Conservation Society.