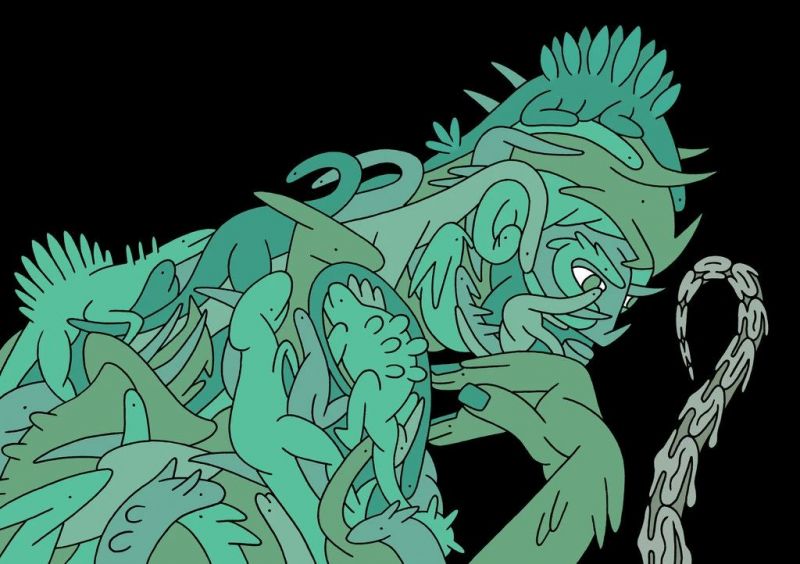 One morning last spring, I opened my email to see a photograph of the paleontologist Diego Pol. There he was, stretched out, feigning sleep, on a dinosaur’s femur roughly the size of a living room couch.

A charismatic Argentine scientist who likes to clown, Diego had a spectacular find. Excavating in the badlands of Patagonia, his team had unearthed a record-breaker: a plant-eating sauropod calculated to have been 130 feet long and 65 feet tall and to have weighed 85 tons, equivalent to 14 adult African elephants. The fossil surpassed the reputed record-holder, another Patagonian sauropod, Argentinosaurus.

Within months, Diego’s dinosaur had other spectacular company. In September, an international team led by Drexel University scientists announced the discovery of another new dinosaur from Patagonia, Dreadnoughtus, at an estimated 85 feet in length and 65 tons.

And these vegans were not the only new sensations. Also in September, a team working in Morocco published its work on the new skeletal remains of Spinosaurus, a 100-million-year-old carnivore. First described in 1915, Spinosaurus has a skeleton and skull that suggest a highly unusual adaptation for both swimming and walking, like a crocodile, but much bigger. At 50 feet, it was 10 feet longer than that famous giant predator, Tyrannosaurus rex.

New findings accumulate like Olympic records. Here we are, in the age of the microchip and the Mars explorer, and yet some of our most exciting and extraordinary scientific discoveries are extinct species in Earth’s fossil record.

These species reveal fundamental facts about our evolutionary past that cannot be derived by studying living organisms. Recently discovered 385-million-year-old fish fossils preserved with flexible limbs explicitly document the transition from life in the water to life on land. Diverse fossils of animals and plants show that some 100 million years ago, Antarctica was a greenhouse, with lush forests bathed in warmth.

This rapidly accumulating evidence also gives us a much clearer sense of what happened during the great mass extinction events of the past that wiped out between 50 and 90 percent of all species. Without a fossil record, our recognition that extinction is both an integral part of the evolution of life and a material reality — at this moment in human history, a far from academic concern — would not be possible.

The 1.8 million species of living organisms so far identified and named are but a fraction of the totality of life on Earth. Thanks to the fossil record, incomplete though it is, we can estimate that more than 99 percent of all species that ever lived are extinct. In a deep sense, our understanding of the future of evolution is rooted in the past.

When I told college friends years ago that I intended to study paleontology, they wondered why I’d want to pursue such a dreary, arcane field. And it’s true that field work is not obviously glamorous.

The search for sauropods and other big dinosaurs takes paleontologists to the barren deserts of Patagonia, western North America, China, Mongolia and South Africa. In the summer, temperatures can rise well above 100 degrees. There is virtually no shade; the wind howls relentlessly. Even with a team, prospecting is often solitary, involving miles of zigzagging up dry streambeds and through wind-scarred canyons.

A big find is thrilling, but paleontology is not an Indiana Jones adventure; it’s serious scientific business. These discoveries, of course, move our own field forward, but in particular, the great mass extinction events hold lessons and insights for the current decimation of species and habitats that we’re witnessing today. Scientists estimate that because of the current destruction of natural habitats and the disruptive power of climate change, we may lose anywhere between 20 and 50 percent of all living species by the end of this century.

The fossil record tells us that mass extinction events were so devastating that it took hundreds of thousands, even millions, of years for the few species that survived to once again diversify and flourish and for ecosystems to recover. In other words, what we know about the past signals that we are in a truly traumatic phase of the planet’s history that could affect much of life on Earth, including our species.

Sauropods were a dominant form of one of those past biological empires that thrived during the Mesozoic era, a chunk of deep time that began 250 million years ago and ended 65 million years ago with an asteroid-induced cataclysm. They were the only animals on Earth, save the largest whales, that ever surpassed the 50-ton mark.

But size isn’t everything. Some of the most scientifically significant dinosaurs are the more slender, ostrich-size fossils that indicate that living birds are an evolutionary branch of dinosaurs. These theropods — a diverse group that includes Velociraptor, the sinister predator of “Jurassic Park” — show how the blue jay in a suburban backyard is a descendant of the mighty Tyrannosaurus and its theropod cousins.

The accumulating evidence for this transition is one of the great accomplishments of paleontology, and much of it has come to light only recently. Fossils from ancient lake beds in northern China preserve exquisite specimens of these transitional dinosaurs, many of them complete with fine, filamentous impressions of feathers. Applying modern biomedical-type technology, like CT scans, and 3-D computer reconstruction and animation, detailed photomicrographs of bone tissue and engineering programming, paleontologists are now able to extract information that gives us a much better sense of dinosaurs as living animals: how they moved, how fast they grew, even what color some were.

We certainly don’t owe the current paleontological gold rush to a funding boom; research jobs are scarce. But it is an increasingly international enterprise, with more people trained and working in their own countries. And political changes sometimes create new opportunities: It was the impending collapse of the Soviet Union that opened up to us in 1990 the fossil wonderland of Mongolia’s Gobi Desert, terrain that had been sealed off from Western scientists for over 60 years.

It was in the Gobi Desert that the 1993 American Museum of Natural History and Mongolian Academy of Sciences expeditions, which Mark A. Norell and I led, discovered an extraordinarily rich locality. One of our trucks got stuck in the sand. While the drivers dug it out, we decided to look briefly at some nearby red-brown cliffs — rocks we had ignored the two previous field seasons.

Within a morning, we knew we had stumbled upon something extraordinary: Dozens of dinosaur skeletons, scores of delicate mammal and lizard skeletons, nests of eggs with embryos, and nesting dinosaurs were splayed out on the surface of a rocky amphitheater not much larger than a baseball field. The oviraptors found nesting on a brood of eggs were the first hard evidence, only hypothesized until then, of parental care among dinosaurs.

Fossils from the Gobi, as well as strata in northern China, also include extraordinary specimens of tiny, shrewlike mammals that point the way toward the origins of the modern group of mammals that includes us. The new discoveries continue to pile up, including a report last week on a remarkably preserved skull of a 70-million-year-old groundhog-like mammal from Madagascar.

Since 2000, we have identified five early hominins, our close prehistoric relatives. And if you think that the fossil record deals only with such changes in million-year scales, think again. Just 50,000 years ago — a blink of an eye in the deep time of paleontology — there were at least three, and maybe four, species of the human lineages cohabiting on this planet. Yet within that span of time, only our own species made it through the evolutionary sieve.

As with any frontier of new knowledge, there are challenges as well as opportunities. Certain regions of the world, like North Africa, may hold the key to understanding the evolution of major groups, but remain poorly explored. Even as some regions become accessible thanks to political change, others can turn into conflict zones. Illegal fossil poaching is rampant in many areas and needs to be controlled before it does untold damage to our future knowledge.

It is all the more important to deal with these challenges when we consider the unique contribution of paleontological evidence to human knowledge. From our study of living species, we could not have been predicted the existence of dragonflies as big as sea gulls or dinosaurs with the bulk of large whales that could support themselves on land. Such discoveries provide insights about the capacity of organisms to evolve, adapt and survive.

After all, sauropods hung on for about 150 million years. That’s no failed evolutionary experiment.

Michael J. Novacek is the senior vice president, provost of science and curator of paleontology at the American Museum of Natural History.