In December 2011, demonstrators took to the streets of Moscow to protest President Vladimir Putin and his corrupt parliamentary election. At one of these rallies, a crowd listened to several speakers — activists, writers, prominent government critics — castigate the Putin government for its authoritarianism.

Then Ksenia Sobchak, a socialite and TV personality, took to the podium. The crowd whistled in disapproval. But Ms. Sobchak, who was known for appearing in films like “The Blonde in Chocolate” (which bestowed her a nickname) and “Thieves and Prostitutes,” persisted.

“I am Ksenia Sobchak, and I have something to lose,” I remember her saying, as she insisted on being heard. She said that she did not want revolution, but she demanded political changes — and this position coincided with the opinion of the majority of the protesters. 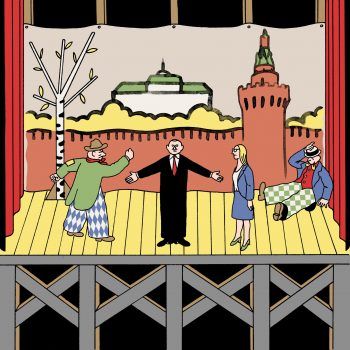 What was Ms. Sobchak doing at this rally, talking about subjects that had little to do with her best-selling book “How to Marry a Millionaire” or the reality TV show she hosted, “House-2”?

She was there because I was one of the organizers of the protest and I had invited her.

We needed celebrities who would appeal to people who mistrusted politicians, and I felt that Ms. Sobchak, who had a strong following among teenagers thanks to “House-2,” would attract her fans to the protest. I put considerable effort into recruiting her. At the time, I didn’t know that for her this protest would be more than a passing episode. It would start her on a completely new path.

That path reached a major turn on Oct. 18, when Ms. Sobchak declared her intention to run for president against Mr. Putin in the election next March. She has committed herself to the opposition now. Sort of.

After that December 2011 rally, Ms. Sobchak became a star of the Russian opposition. The next year, she ran for a seat on the Opposition Coordination Council and came in fourth, behind only the most well-established leaders — Aleksei Navalny, Garry Kasparov and the popular writer Dmitri Bykov. (I came in 18th.)

In the summer of 2012, the magazine Afisha organized a discussion between us, as representatives of the radical and centrist positions: I said that Mr. Putin’s state was an absolute evil, and Ms. Sobchak said that my position was too extreme and that in fact, everyone has his own truth, even the police (she called them “the boys from the police”) who beat up the opposition at protests.

When “the boys from the police” came to search Ms. Sobchak’s house in connection with the unrest at a May 12 rally at Bolotnaya Square, it became clear that she had reached the next level as an opposition activist. In Russia, the status of a member of the opposition derives from the level of interest the police pay to the person.

Almost all of the leaders from those days of protest in the winter of 2011-12 have now withdrawn from direct action. Practically the only one who remains and has continued to struggle actively against Mr. Putin is Mr. Navalny, who declared last year his intention to run for president in 2018.

Rallies for Mr. Navalny are being held all over the country, and if Russia had an independent electoral and judicial system, he could probably pose a real challenge to the incumbent. But Mr. Putin himself effectively determines whom he must defeat in each election, and most likely Mr. Navalny will be kept off the ballot.

This will be the fourth presidential election in which Mr. Putin is a candidate, and each time he faces the same political veterans: the Communist Gennadi Zyuganov and the populist Vladimir Zhirinovsky. These men are themselves characters in a reality show, aging before the eyes of the entire country and simulating a political battle year after year. Society has long viewed them as comic figures with no serious chance of success.

Mr. Putin understands this and he sees no glory in defeating the usual run of puppet buffoons. That’s why the Kremlin seeks fresh faces each time. In 2012, the handpicked opponent on the liberal side was the billionaire Mikhail Prokhorov, which allowed Mr. Putin to take on the role of defender of ordinary workers in their conflict with the wealthy elite.

The fresh face this time will be Ms. Sobchak. She will oppose Mr. Putin from a liberal position. Ms. Sobchak herself told Mr. Putin about her decision to run for president when they met during the filming of a documentary about her father, Anatoly Sobchak.

In 1990, when Mr. Sobchak was mayor of Leningrad, the second-largest city in the Soviet Union and one of its most graft-prone, he made Mr. Putin his deputy. Later, he defended Mr. Putin from corruption accusations. Eventually, he fled the country when he faced his own corruption allegations. He returned after Mr. Putin became prime minister and then died shortly afterward.

For the opposition, Ms. Sobchak’s meeting with the president, in which she essentially seemed to ask permission to run against him, amounts to treachery: A true opponent of Mr. Putin would never negotiate with him about participating in the election.

But are there any real Putin opponents in Russia? In his 18 years running the country, no opposition politician has proved capable of presenting a serious challenge to the regime. Really, there’s no one for Ksenia Sobchak to betray. Russian politics consists entirely of simulations and simulacra; its political dramas are a complete sham.

Ms. Sobchak is no dramatic heroine; her play is a vaudeville act in which the daughter of a deceased teacher enters into an alliance with his pupil, in hopes of possibly outwitting him. At the moment there may be no sense in playing such a game, but Ms. Sobchak is only 35 years old. Maybe by the time she turns 50, her image will turn into something of real political substance.

As for Vladimir Putin, he has experience staging this kind of vaudeville aimed at turning a frivolous showman into a major political player: Isn’t that what happened with Donald Trump?

Oleg Kashin is the author of Fardwor, Russia! A Fantastical Tale of Life Under Putin. This essay was translated by Carol Apollonio from the Russian.