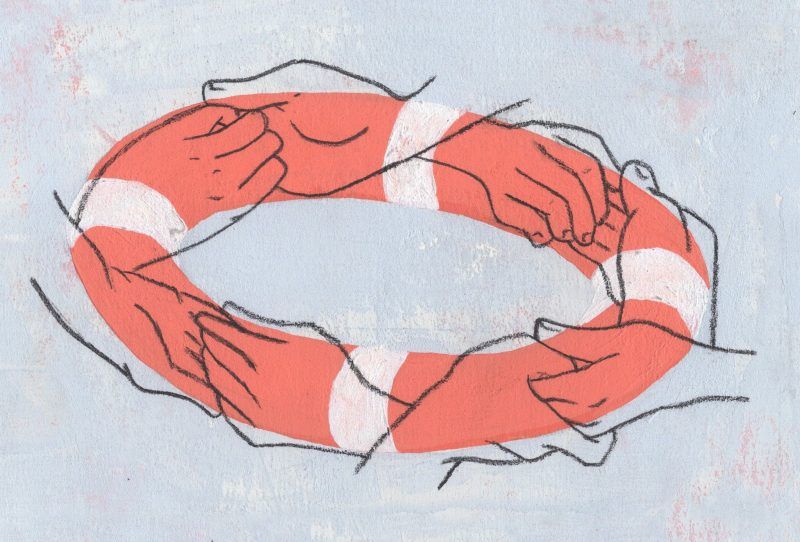 I live with my parents and older brother in this rural mountain town in the center of this island. Hurricane Maria made landfall here six months ago this week. The strong winds began to lash our area by 2 a.m. on Sept. 20. Our power and water had already been shut off for a day by then.

My family, along with about 200 other people, sought refuge at a high school in our town. Whenever the doors were opened to let others in, the wind would whip through the hallways. I was scared. A few of us gathered in a circle, joined hands and prayed, hoping it would bring us some sense of peace. Then chaos broke out.

The Plata River, which cuts through Comerio, had swelled by more than 60 feet and was creeping ever closer to the school’s front door. Fearing the worst, those of us sheltered on the first floor quickly scrambled up the stairs to the second floor, carrying the bedridden elderly with us.

In the end we were spared. Once the eye of the storm settled over us, things calmed down. Soon from the second floor we saw whole families walking toward the school. In all, about 100 more people arrived; wet, muddy, hugging one another and crying. A mother whose house had flooded told us how she and her kids narrowly avoided drowning. She had lifted her three children — all under the age of 5 — on to her shoulders and waded through the water until she reached higher ground. A woman fainted when she recounted how floodwaters had swept her house away.

On the second night we were finally able to go home. It was pitch black and raining. Our terrace roof was gone; a tree that had fallen on the back of the house caused some structural damage, and water had come in through the windows. But our home, built of concrete, still stood.

We were among the lucky ones.

Three days after Maria hit, the streets were still largely impassable. We set out on foot to the very river that was our source of terror during the storm, checking in on neighbors along the way. There was no electricity and no running water, so the river was now our sole source of water. We bathed in it, washed our clothes and dishes on its banks and carried back home as much of it as we could manage to boil for drinking and cooking.

It would be two weeks before the town supermarket reopened, and two more months before we could use our credit cards to shop there. We ran out of cash. The local bank remained closed until the end of November. Gas was scarce. Before the hurricane, I was working toward a master’s degree in management and leadership at the University of Turabo. My studies were put on hold. When the university reopened in October, I had to go to neighboring towns that had power to contact my professors and my classmates, or to work on my assignments. Everything became complicated.

For about two weeks we didn’t know if my older sister, Maran — who lives in Fajardo, a city in the eastern region of the island — had survived. She finally heard that the street to Comerio was clear and made her way to us. My dad screamed when he saw her. We all gathered around her, crying and hugging.

Since then, little has improved much. There’s so much left to do. We’re still fighting to get our lights back on. The local government hasn’t come to meet with our neighborhood or give us updates. We’re getting by with a generator my uncle on the mainland sent us. Other family members and friends have brought us much-needed water filters, batteries, food and tarps.

In total, some 1,500 homes in Comerio were destroyed and 2,400 others sustained significant damage. I began to volunteer with the recovery effort. We’re in this together and we’re all pitching in to help one another rebuild.

With $10,000 raised through crowdfunding and $5,000 from the Defend Puerto Rico Hurricane Relief Fund, we rebuilt one house and repaired two others with damaged roofs. With the help of Coco de Oro and La Maraña, the organizations I volunteer with, we have raised money to begin work on the next eight houses. But there are 25 more houses in my neighborhood alone needing work and thousands more in all of Puerto Rico.

We’re working collectively to lift ourselves out of this nightmare, but we can’t do it on our own. I struggle to understand why the United States government continues to withhold the aid we were promised. We’re tired of being treated like second-class citizens. The Trump administration must honor its commitment to Puerto Rico. Our hurricane-ravaged island may no longer be in the headlines, but we’re still suffering, and we need help.

Mariangelie Ortiz Ortiz is a student at the University of Turabo and a volunteer with the organizations La Maraña and Coco de Oro.