It is extremely unlikely that President Obama will be able to fulfill his promise of closing Guantánamo before leaving office, but he can still take action to mitigate this national stain. Torture causes profound harm to human beings, families, and communities. We cannot undo the torture that was committed on scores of men — but we can do the right thing now: We can provide the medical, psychological, and social supports these survivors need to heal.

This positive step will not only protect our national security by reducing the likelihood that released prisoners will act against our interests, but also will begin to restore the reputation of our country as a human rights protector — a distinction that has been shattered by our use of torture and cruel, inhuman, and degrading treatment in the war on terror. Guantánamo especially continues to create hostility towards our troops and citizens and encourages violence in retaliation. It is not a coincidence that ISIS has executed westerners dressed in the infamous orange jumpsuits, an icon of Guantánamo.

Approximately 800 Guantánamo prisoners have been released so far, most to an uncertain fate, with no health care or rehabilitation. Men transferred to Uruguay last year, for example, were sent to a country where they had no roots, no access to their families, no familiarity with the language or culture, and no access to torture rehabilitation treatment. Their hardships were predictable and avoidable. One of them, Jihad Dhiab, “disappeared” from Uruguay to Brazil, and his presence there was used as a rationale to increase security at the Rio Olympics. After being imprisoned in Venezuela, he was returned to Uruguay and reportedly became comatose while on a hunger strike. The Herald reported on Friday that Dhiab recently attempted to escape to South Africa, but was turned away. It does not take a psychiatrist to see that he is suffering from mental illness and is desperate to be reunited with his family. 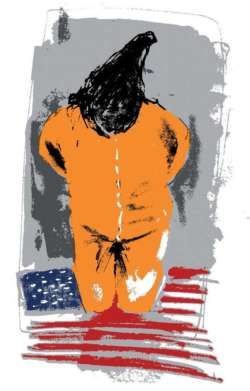 Dhiab was the first Guantánamo prisoner to challenge brutal force-feeding in federal court. He is a very ill man, suffering from right-sided paralysis and severe pain, conditions created by his harsh treatment at Guantánamo. In his words, “The doctors are involved in punishment and their purpose is to torture.” His medical records confirm that doctors were used as agents of the guard force, confiscating his wheelchair and even denying him access to underwear and socks.

Another former prisoner, Tarek El-Sawah, who was dumped in Bosnia in January, is similarly struggling without access to any resources, medical care, or rehabilitation. It was determined during a visit to Sarajevo in July by one of the authors (Dr. Crosby) that he currently suffers from binge-eating disorder and major depression, illnesses either caused or exacerbated by his experiences in U.S. custody. He was on a dozen medications in Guantánamo, but has been unable to obtain any of them since his release. He and his daughter are both suffering and are vulnerable to exploitation by those who could use him against U.S. interests. He has described his post-transfer Bosnia circumstances as “a worse kind of prison.”

All of the men released from Guantánamo have been cleared by U.S. officials as not posing a security threat. Evidence of the abuse inflicted on terrorist suspects has been slowly released, starting with the horrific images from Abu Ghraib, and now including court documents, press accounts, and the executive summary of the U.S. Senate torture report. Many of these men are suffering from the long lasting psychological, physical, and social consequences of the torture inflicted on them while in U.S. custody.

Our laws, including Article 14 of the Convention Against Torture, require us to provide victims of torture with an “enforceable right to fair and adequate compensation, including the means for as full rehabilitation as possible.”

It is past time that we begin to live up to our legal and human rights obligations to the former prisoners of Guantánamo — for both their sakes and our own.

Dr. Sondra Crosby performed medical examinations on the former prisoners described. She is Associate Professor at Boston University School of Medicine and a faculty member of the Center for Health Law, Ethics & Human Rights at the B.U. School of Public Health. Dr. George Annas is the director of the center.