Europeans are coming to realize that Brexit is changing Europe. Britain has long been a semidetached part of Europe, but in that capacity it played a crucial role. It was partly a balancing power, partly a therapist for the Franco-German couple that constituted the core of European politics. In Germany and France, it is a common refrain that they each need Britain as a counterweight to the other.

The European integration story began in optimism, but now seems mired in misunderstanding and miscommunication. French and German people don’t speak each other’s language, and literally don’t understand one another. That’s not just a linguistic issue; it is one that appears in every political and economic discussion. It also follows that politicians and central banks talk about economics in English, a foreign language in both nations, and so it’s hardly surprising that ordinary people feel excluded and lost. 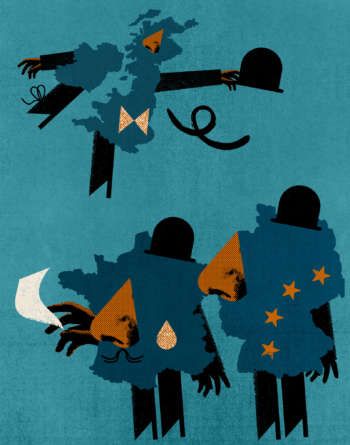 The question Europe currently faces is what kind of shock do France and Germany need to get them to start communicating effectively? There are plenty of challenging issues and bad events to which they might and should respond collectively: from energy and the environment to refugees to the terrorist threats that at first seemed a French peculiarity but have recently hit Germany hard, too.

The root of the tension between Paris and Berlin is their different understanding of economics and politics. They each think about the state in contrasting ways. The clash remained beneath the surface as long as there was economic growth, but during the European debt crisis, it erupted into the open.

The essence of each national position is easy to describe. The French vision likes to draw on the Anglo-American Keynesian tradition, in which state activity is the great stabilizer. In the French account, the state is good because it provides central planning and management, and large-scale public expenditure is a useful way of getting out of cyclical crises. France’s industrial policy also protects its national champions.

By contrast, Germany is skeptical about public-sector interventions; instead, its policy aims to support a broad group of middling-size enterprises rather than pick a handful of winners. German politicians typically worry more about creating moral hazards by featherbedding businesses.

A look back at the two countries’ histories reveals that these modern German and French beliefs are not, as many people like to imagine, the outcome of an inevitable destiny or ancient tradition. Their current standpoints are actually a reversal of the dominant beliefs that prevailed in the two countries until the middle of the 20th century.

Nineteenth-century France had an economic philosophy largely dominated by the doctrine of laissez-faire, as expounded by the great economists Frédéric Bastiat and Léon Say. At the same time, German thinkers developed the theories of Staatswissenschaft, or political science, and applied them to a broad range of economic and social problems.

Then, something dramatic happened. In both countries, the two older traditions became discredited: in Germany, by the disasters of the Third Reich; in France, by the disintegration of the Third Republic after its military defeat and occupation. On both sides of the Rhine, these catastrophes determined a fundamental change of course.

The builders of postwar Germany — above all, the Christian Democrat economics minister (and later, chancellor) Ludwig Erhard — saw Nazism as the outcome of the older German tradition of thinking. They wanted to establish rules that would curb not only the state’s abuse of power, but any concentration of power.

By contrast, a new generation of French thinkers blamed the old do-nothing liberal school of economics both for sluggish growth and for the industrial failure to organize rearmament in the 1930s. After World War II, then, the French emphasized the desirability of a planned economy and came to detest laissez-faire liberalism (or as they termed it, “ultraliberalism”). In contrast, Germans recoiled from the idea of state intervention for fear that its actions could be arbitrary and dictatorial.

The most successful statesmen of Europe’s postwar period, Konrad Adenauer and Charles de Gaulle, thought of crises as opportunities for transformation. Twenty-first-century Europe, however, has a quite different sense of what a crisis is and what it offers. In the mind-set of today’s European Union elite, who still adhere to an idea of European integration laid down by Jean Monnet, crises merely require the central bureaucracy to tweak the existing technocratic plan. Beyond Brussels and Strasbourg, though, people have come to view a crisis with a constant sense of hopelessness and the impossibility of effective reform. Neither attitude is helping.

The deeper question that faces both the French and German traditions is whether it is possible to think of a better approach, now that Britain will no longer play the role of broker. Can the institutions of the European Union control and monitor interventionist policy and ensure that it does not simply breed corruption and inefficiency? In what ways can the private sector contribute?

Private-sector involvement can clearly bring important public benefits and gains. One obvious example is that free enterprise can help with the task of integrating Europe’s new populations of refugees. There are sound precedents for this in earlier crises: Germany in the aftermath of 1945, and France following decolonization. In both cases, millions of newcomers, employed, generated prosperity and dynamism.

Another genuinely European project would be to build new infrastructure to connect local and national energy networks, which would help smooth out the incompatible pricing structures that currently exist in Europe. There would be clear gains from integration. At the same time, the greater diversity of supply there is, and the more market alternatives (including different forms of energy) there are, the more resilient Europe’s energy economy is — especially against external shocks.

Post-Brexit, the European Union has to look as if it can work. It needs a vision, but just as important, it needs to show results. Without that, people in its member states will lose confidence in the idea of the union and in the idea of themselves as its citizens.

A challenge like Brexit should elicit neither technical tweaks nor popular despair. Above all, Europeans need persuading as to how productive a crisis can be.

Markus Brunnermeier and Harold James, both professors at Princeton University, and Jean-Pierre Landau, a professor at Sciences Po, Paris, are the authors of The Euro and the Battle of Ideas.