Today the world continues to focus on Moscow’s brazen aggression in Ukraine and its blatant disregard for international law. However, Russia’s imperial delusions and energy dependence are also creating major problems elsewhere in the world, including in the Arctic — a vast, energy-rich region where the Kremlin has both great ambitions and is pursuing dangerous policies.

Despite its superpower pretensions, Russia remains a poorly developed state with a unidimensional economy that is extremely dependent on oil and natural gas, and saddled with often difficult-to-access energy deposits costing billions to exploit. An increasingly stagnant economy has only widened the disconnect between Moscow’s ambitions and its economic capabilities. Rather than undertaking deep economic reforms (which would also require significant political change), the Kremlin has opted to pursue new sources of energy and to continue with a massive military modernization program designed to meet what are clearly inflated threats. 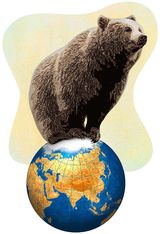 In pursuit of both goals, Russia has naturally focused on the Arctic. The region’s fragile, endangered and difficult ecosystem reportedly contains approximately one-quarter of the world’s undiscovered fossil-energy sources. To date, Russia has been far ahead of the other states that border the Arctic (particularly the eight Arctic Council members) in exploring the region. According to a recent study by the Council on Foreign Relations, of the 60 oil and natural-gas fields discovered in the Arctic, 43 are in Russia, while only 11 are in Canada and six in Alaska.

As the foregoing suggests, Russia has moved aggressively to take control of much of the Arctic. From a quixotic claim to vast parts of the Arctic seabed (a Russian deep-diving minisubmarine planted a flag on the ocean floor at the North Pole in 2007) to an exclusive claim to the 1,200-mile-long Lomonosov Ridge, Moscow has defied not only international legal norms, but also environmental prudence and the technological reality of Arctic energy exploration in making aggressive military moves designed to intimidate its regional neighbors.

Not only has Russia enormously increased its overall military expenditures, it also rapidly has begun to reopen and strengthen all of its Arctic military bases. Russian President Vladimir Putin has specifically instructed his military to pay strong attention to the Arctic, declaring that Russia required “every lever for the protection of its security and national interest there.” Last year, he also ordered the creation of a new strategic military command in the Arctic to be in place by the end of 2014.

As Russia increases its global military commitments while burdened with a stagnant, energy-dependent economy, the Arctic region is ripe for Russian military or ecological miscalculation. In the context of the global interest in the Arctic, and given the tangible evidence of Russia’s militarization and contempt for international agreements, the West must think in terms of a “new containment.” It is already clear that Russian policy — propelled by inflated threats, military aggressiveness and excessive militarization of politics and the economy — as well as a history of Russian recklessness regarding ecological issues, makes Moscow an untrustworthy actor in the region.

Indeed, in recent months Russia has increased its overflights of other states with major interests in the Arctic, as well as its threatening rhetoric against them. Such behavior is a sign of things to come. Unless the world’s democracies cooperate effectively to deter and contain Russia, it will increasingly act as a rogue actor in the Arctic, as it has elsewhere.

Stephen Blank is a senior fellow at the American Foreign Policy Council in Washington and is writing a book on Russian foreign policy in East Asia. Aurel Braun is a visiting professor in the department of government at Harvard University and author of NATO-Russia Relations in the Twenty-First Century.