The gray hill of Bhalswa, in the north of the city, is first visible from the elevated platform of the final Metro station on the northern line. From that distance it looks like a natural feature, a sort of gloomy mesa with black kites wheeling above it. Only when you get closer does it resolve into a hill of trash: compressed and decayed into crud at the base, but higher up, streaming with gray ribbons of polythene and pixelated with bright packaging.

Looked at one way, it is a vision of the future: the endgame for India’s consumption economy, which is producing waste at a rate we are nowhere near equipped to handle. Delhi alone throws out at least 7,000 metric tons of trash every day. The four landfills rising around the capital, of which Bhalswa is one, reach the height of 10-story buildings.

Soon after Narendra Modi was elected prime minister last year, he signaled that sanitation would be a priority — the priority — of his social program. In October, Mr. Modi introduced the Swachh Bharat Abhiyan campaign, a raft of policies and public appeals aimed at creating a “Clean India” by the end of his term. Corporate support was commandeered to reduce open defecation, while the general public was charged with recycling and eradicating litter. In April Mr. Modi urged a gathering of state ministers to help create “wealth out of waste.” 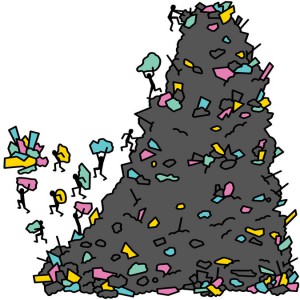 After making his announcement in October, Mr. Modi personally swept up some leaves and junk. He then nominated nine public figures to do the same, and asked each of them to nominate nine more — setting off a brief chain reaction of awareness and awkward broom-handling. He pledged to spend two hours every week cleaning up his surroundings, a commitment that was echoed down the halls of government and in schoolyards across the country.

Ten months later, the streets and neighborhood dumps are as deep in it as ever, and it is Mr. Modi’s campaign that seems to have been binned. The prime minister is no longer seen sweeping, and absent his example, neither is anyone else. A nationwide effort by middle-class volunteers made for a great inaugural spectacle. But it was never likely to last much longer than its hashtag trended on social media.

Meanwhile, the millions of Indians who do turn daily to the task of collecting, sorting and reducing India’s garbage have been sidelined from the government’s campaign. These are the urban poor whose livelihood relies on the recovery and sale of anything with residual value. They are usually referred to as scavengers or ragpickers: words that describe their desperation, but never their value.

In fact, they are India’s consummate recyclers, and the ideal workforce for Mr. Modi’s agenda. They are estimated to number 350,000 in Delhi alone. Their work already mitigates our garbage crisis, and if they were officially admitted into the chain of municipal waste management, India actually might get cleaner.

At Bhalswa, the sides of the hill are ramped, making a route to the top for garbage trucks. On a visit in May, the plateau, four or five acres wide, was full of crashing noise and activity. Hundreds of people were at work. There were cows, dozens of them, foraging for fruit peels. A sour stench wafted through. The odd brand name — Oreo, Haldirams, Tampax — peeped out from the garbage packed underfoot.

Away from the main activity stood Mustafa, in his late 60s, with a gray beard and a baseball cap. He knew his trash. “You see this coir,” he said, picking at a tuft in a heap of coconut-husk fiber. “This can be used to pack affordable mattresses, which come for just a few hundred rupees.”

Mustafa pulled out a mop-cloth from a bundle at his feet. “This rag gets mixed into paper pulp for newspapers.” Low-grade plastic would be reduced to daane — seeds from which buckets and pipes can be re-synthesized. Twigs and branches from Delhi’s parks and gardens would be sold as firewood.

With the right guide, the scene at the top of the Bhalswa dump stopped looking like the apocalypse — and started to look vaguely like a village at harvest time. In the busiest area, where trucks tipped fresh waste, women with hoes and two-pronged picks broke up and searched the piles. There was a pattern of loose cooperation on how recyclables were bagged and carried away.

This garbage had already been sifted for recyclables two or three times: Even so, at the top of the ramp, bales and haystacks of recovered material were accumulating. It was clear that what is deplored as rag-picking is impressively productive. “If this trash work is stopped,” Mustafa said, “a thousand mills, a thousand factories will stop. They all run on trash.”

Of course, Bhalswa is a terrible place to make a livelihood. The garbage arrives unsorted, so workers sift through decaying organic muck and unsanitary refuse, including dirty diapers and medical waste. They cut their hands on razors, broken glass and wire. But if the harvest of waste is a sickening and dangerous activity, that is mainly because of the conditions imposed on it, and the stigma attached.

Increasingly it is being banished by municipalities, which favor corporate contractors and mechanized disposal — all the more since Mr. Modi’s campaign began. The campaign’s focus on cosmetic results is undermining the work of precisely those Indians who, by extracting a living from our trash, reduce the real costs of our consumption.

Any plan for cleaner — instead of just prettier — Indian cities will have to engage waste-workers, not exclude them. Pilot projects in Delhi, Pune and elsewhere have found ways to integrate them into the municipal process and make the occupation more hygienic, more productive and better for the environment.

One central problem of waste-work is that it happens in places designed for trash, rather than for people who harvest from trash. The Safai Sena, or Cleaning Army, is a registered group of waste-pickers in New Delhi that runs facilities where workers can spread out, segregate, wash and bale recyclables, rather than wading shin-deep through rubbish and sorting it on a footpath. The land for their sheds was granted by different agencies: The railways, for instance, set one up to process the trash from New Delhi Station. To make this possible on a larger scale, urban-master plans will need to allocate space for decentralized recycling, as they do for other public utilities.

In Pune, the SWaCH waste-workers’ collective leads the way in establishing formal access to municipal waste. Like other groups of garbage pickers, this one seeks to make the doorstep collection of waste universal, and to be paid for it as a professional service rather than with pathetic handouts. The city now provides these workers with health insurance, and legal registration to protect them from police harassment.

Waste-workers’ unions have reached out to residents’ associations, to formalize how trash is picked up, as well as to large manufacturers, to whom they can sell recycled material. The government has been indifferent so far. But if Mr. Modi is serious about creating wealth from India’s waste, there is a workforce waiting for him.

Raghu Karnad is the author of Farthest Field: An Indian Story of the Second World War and a contributing editor at TheWire.in.