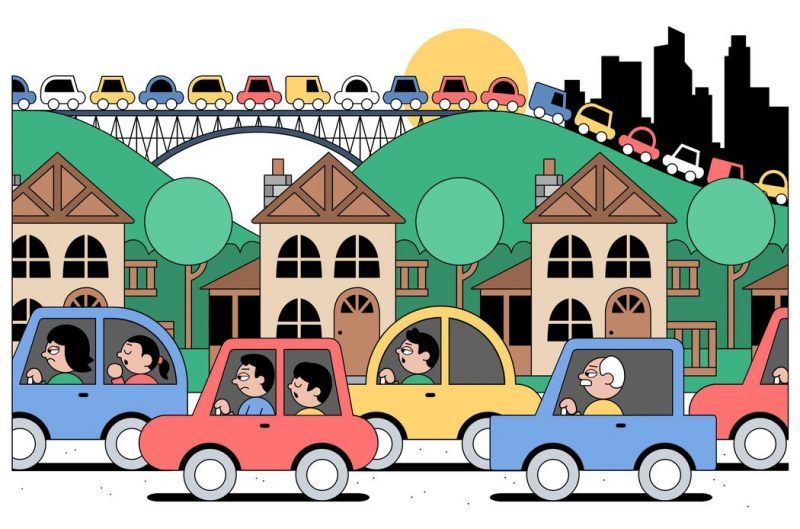 Just after 6 o’clock on a Monday morning, and traffic on the Johor-Singapore Causeway is already busy. In less than an hour, still shrouded in semi-darkness, the Singapore-bound traffic leading to the 0.7-mile bridge will have slowed to a crawling pace; in bad weather or on the eve of public holidays, rush hour queues sometimes last up to two hours. A striking number of family sedans with Singaporean license plates stream steadily toward the expressway that leads to the heart of the island republic. Inside the cars, bleary-eyed schoolchildren contemplate the long day ahead.

As the population of Singapore increases and the cost of living, especially of housing, remains high, more Singaporeans are choosing to live across the narrow strait in Malaysia and commute in.

The traffic is a visible sign of reinvigorated links between the two countries, whose relationship has been punctuated by political tensions despite shared historical roots and huge bilateral trade. As Singapore celebrates the 50th anniversary of its independence — and separation from Malaysia — the rivalry between the two neighbors seems finally to be giving way to a greater recognition of their interdependence.

Last month, the front page of the widely read Today newspaper featured a lavish spread highlighting the growing trend of Singaporean families relocating to Iskandar, the 850-square mile special development zone in the southern Malaysian state of Johor. Established in 2006, Iskandar covers a land area about three times the size of Singapore; its ambitions rely in large part on its proximity to its neighbor’s mature and continuously expanding economy.

In Iskandar’s vast housing developments, landscaped streets in gated townships with names like Eco Botanic and Iskandar Waterfront are lined with vast two- or three-story suburban houses with spacious gardens — what locals call “landed property,” a luxury beyond the means of all but the very richest across the causeway. A 3,000-square-foot house in Horizon Hills, a development that boasts a clubhouse, gym and lush golf course, costs around $170,000, the price of a small government-built Housing and Development Board apartment in Singapore. For this alone, Singaporeans are prepared to face the daily routine of waking up at 4 a.m. in order to get their children to school on time, and then waiting until 7 p.m. for all family members to have finished work or extracurricular activities before driving across the causeway again.

Developers are anticipating continued demand. The China-based Country Garden released 9,000 units at Danga Bay in recent years, and Guangzhou R&F Properties is starting work on a site that covers an area twice the size of the Danga Bay site, prompting some to fear an eventual glut. There are the new Legoland amusement park and the Pinewood film and TV studios, as well as commercial and retail parks, factories and warehouses. Nursing homes are swelling with demand from the Singaporean middle class. A two-bed private residence at the City Heart Care home, complete with personal TV and computers, costs around $675 a month, half the price of the equivalent in Singapore.

The growing Singaporean presence in Iskandar signals an accelerating détente between Singapore and Malaysia. Until 1965, the two countries were part of the same union, first under British colonial rule and then under the fledgling state of Malaysia. Singapore’s painful expulsion from the union in 1965, due to conflicts between Singapore’s leader, the late Lee Kuan Yew, and the Malay-led UMNO government — notably over equal rights for various ethnic groups, like Singapore’s ethnic-Chinese majority — set the tone for decades of squabbling: about land reclamation in the Johor straits; about territorial rights over Pulau Batu Puteh/Pedra Branca; about Malaysia’s supply of water to Singapore; about Malaysia’s ownership of Singapore’s main rail terminal; and, of course, about the causeway.

Stereotypes are bandied by both sides, with Singaporeans often calling Malaysia underdeveloped and crime-ridden, and Malaysians saying that Singapore is boring and “kiasu,” a colloquial term that literally translates as “afraid of losing” and refers to an unhealthy competitiveness. In these two food-obsessed countries, even culinary matters have been cause for quarrel, with a ludicrous argument over the provenance of Hainanese Chicken Rice, which Singaporeans consider to be a national dish.

But in recent years, some complicated issues, such as the transfer of Malaysian rights over Singaporean railways, have been resolved. And as the prime ministers of the two countries, Lee Hsien Loong of Singapore and Najib Razak of Malaysia, emerged from a two-day retreat recently, it was clear both were pressing for increased cooperation. They announced, for example, the construction of a high-speed rail connection that will eventually cut travel time between Kuala Lumpur and Singapore to a mere 90 minutes.

In fact, until 2013, Malaysia was Singapore’s largest trading partner, with annual bilateral trade reaching over $90 billion, a figure only recently superseded by Singapore’s trade with China. Yet this longstanding economic cooperation is rarely acknowledged amid their rivalry — a legacy of the trauma of separation in 1965, which cast the two countries as political opposites.

The huge number of people now travelling between Malaysia and Singapore is a fresh reminder of just how close the two countries fundamentally are. Malaysians have for many years been relocating to Singapore in search of job opportunities and higher salaries: According to Singapore’s 2010 census, roughly 13 percent of the resident population is Malaysian. Now it is Singaporeans who are searching for a gentler pace of life in Malaysia. In moving across the causeway, both peoples are giving the lie to the prejudices of recent decades by reaffirming links between their cultures that go back centuries.

Tash Aw is the author of three novels, including, most recently, Five Star Billionaire.