In 2012, just before Fatou Bensouda began her tenure as the International Criminal Court’s chief prosecutor, she addressed a large forum of African activists and academics in Cape Town. As she spoke to a room packed with highly educated skeptics — many of whom claimed that the I.C.C. appeared to have “an imperialist agenda” toward Africa, you could have heard a pin drop.

She confronted the critics head-on, arguing that accusing the I.C.C. of having an Africa bias was offensive. She pointed out that those making such accusations tended to be powerful, influential and deeply invested in making the world “forget about the millions of anonymous people that suffer from their crimes.”

And she insisted on naming names: “Our focus is on individual criminal behavior against innocent victims. My focus is on Joseph Kony, Bosco Ntaganda, Ahmed Harun, Omar al-Bashir,” she declared. “The Office of the Prosecutor will go where the victims need us.”

When she was finished, Ms. Bensouda received a standing ovation.

At the time, I was proud to come from a country that had both signed the Rome Statute establishing the I.C.C. in 2002, and — with the zealotry of a convert — ratified the treaty by passing a domestic law called the I.C.C. Act in 2004. 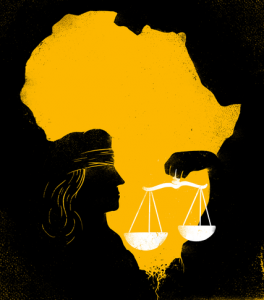 This week South Africa allowed Sudan’s president, Omar Hassan al-Bashir, to leave the country while fully aware of the I.C.C. warrant for his arrest on charges of genocide, crimes against humanity and war crimes. The I.C.C. claims to have evidence that Mr. Bashir committed these crimes against the Fur, Masalit and Zaghawa groups in Darfur on the basis of their ethnicity and used the Janjaweed militia to rape and murder civilians.

Mr. Bashir was in the country to attend a summit meeting of the African Union when a small advocacy group called the Southern African Litigation Center, on whose board I once sat, petitioned a court in Pretoria to determine whether it had jurisdiction to act on the I.C.C.’s warrant. The judge ordered the South African government to bar Mr. Bashir from leaving the country.

By allowing Mr. Bashir to leave the following day, while claiming not to know his whereabouts, South Africa violated international law and its own laws too. More important, it sent the message to victims of war crimes throughout the world that they can’t count on the solidarity of South Africa when they need it.

The demise of South Africa’s conscience has not been sudden. For at least a decade, it has sent mixed signals about its commitment to human rights. The Dalai Lama has been refused entry into the country eight times because of the government’s relationship with China, and senior officials have flip-flopped on gay rights at various international meetings despite having one of the only constitutions in the world that includes explicit protections for lesbians, gays, bisexuals and transgender people.

There are legitimate objections to the I.C.C., first and foremost that the court will have little credibility so long as powerful countries like Russia and the United States refuse to subject themselves to its jurisdiction. Many African commentators have insisted that an attempt to arrest Mr. Bashir will lack legitimacy until Tony Blair and George Bush are indicted for their respective roles in the Iraq war. This line of thinking provided the South African government with some political cover for its shameful actions last week, and allowed the ruling party to portray itself as a champion of African autonomy, standing bravely against “the West.”

While there is merit in highlighting the glaring double standards that operate in international relations, Africans must resist the temptation to devalue the lives of ordinary people for the sake of petty point-scoring against some nebulous “West.” It diminishes our own humanity when we brush aside serious allegations against a fellow African on the basis that others have done the same and gotten away with it.

If the South African government were genuinely interested in advancing an African agenda on international justice, it could easily have argued that it was not choosing to detain Mr. Bashir because of its obligation to the Rome Statute, although it remains legally bound to it. Rather, South Africa could have announced that it was arresting Mr. Bashir because it takes its own laws seriously — and the country’s own 2004 I.C.C. act clearly obliged local agencies to act as a police force, arrest Mr. Bashir and hand him over to The Hague.

Instead, using Western hypocrisy as a fig leaf, the government chose to ignore the moral imperatives that gave rise to the I.C.C. And by letting Mr. Bashir leave the country as though the charges against him were meaningless, the government dealt a final blow to South Africa’s diminishing moral standing on the global stage.

In abdicating its responsibility to Mr. Bashir’s victims in Darfur, South Africa has demeaned its own history of principle-based struggle. Thankfully there is a difference between a government and its people. The judges of the Supreme Court of Appeals who ruled that Mr. Bashir should be detained are South Africans. So is the journalist who live-tweeted the whereabouts of Mr. Bashir’s motorcade as it made its way to a military airport. And so is the tiny, underfunded organization that took on its government and won.

The South African government may have lost the moral high ground but its citizens have not.

Perhaps it was fitting that a meeting of the African Union precipitated South Africa’s fall from grace. In the apartheid era, members of the union’s predecessor, the Organization for African Unity, often declared that Africa would not be free until South Africa was free. Regional and international solidarity were pillars in the African National Congress’s successful liberation strategy. Once free, members of the liberation movement often claimed that they would repay their debts to the international community by championing human rights.

Sisonke Msimang is a columnist for the South African website The Daily Maverick and former executive director of the Open Society Initiative for Southern Africa.