After more than three years, almost 200,000 dead in Syria, the near collapse of Iraq, and the rise of the world’s most sinister terrorist army — the Islamic State in Iraq and Syria, which has conquered vast swaths of both countries — President Obama’s admission this week that “we don’t have a strategy yet” to deal with this threat is startling. It is also dangerous.

The president clearly wants to move deliberately and consult with allies and Congress as he considers what to do about ISIS. No one disputes that goal. But the threat ISIS poses only grows over time. It cannot be contained. It must be confronted. This requires a comprehensive strategy, presidential leadership and a far greater sense of urgency. If Mr. Obama changes course and adopts a strategic approach to defeat ISIS, he deserves support. 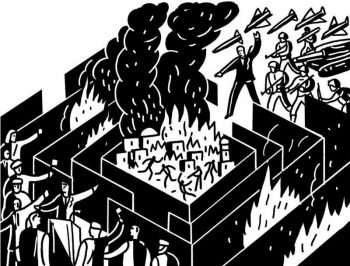 Such a strategy would require our commander in chief to explain to war-weary Americans why we cannot ignore this threat. ISIS is now one of the largest, richest terrorist organizations in history. It occupies a growing safe haven the size of Indiana spanning two countries in the heart of the Middle East, and its ranks are filled with thousands of radicals holding Western passports, including some Americans. They require nothing more than a plane ticket to travel to United States cities.

This is why the secretary of homeland security has called Syria “a matter of homeland security.” His warnings about ISIS have been echoed by the attorney general, the director of national intelligence and, now, the secretary of defense. Americans need to know that ISIS is not just a problem for Iraq and Syria. It is a threat to the United States. Doing too little to combat ISIS has been a problem. Doing less is certainly not the answer now.

It is a truism to say there is no military solution to ISIS. Any strategy must, of course, be comprehensive. It must squeeze ISIS’ finances. It requires an inclusive government in Baghdad that shares power and wealth with Iraqi Sunnis, rather than pushing them toward ISIS. It requires an end to the conflict in Syria, and a political transition there, because the regime of President Bashar al-Assad will never be a reliable partner against ISIS; in fact, it has abetted the rise of ISIS, just as it facilitated the terrorism of ISIS’ predecessor, Al Qaeda in Iraq. A strategy to counter ISIS also requires a regional approach to mobilize America’s partners in a coordinated, multilateral effort.

But ultimately, ISIS is a military force, and it must be confronted militarily. Mr. Obama has begun to take military actions against ISIS in Iraq, but they have been tactical and reactive half-measures. Continuing to confront ISIS in Iraq, but not in Syria, would be fighting with one hand tied behind our back. We need a military plan to defeat ISIS, wherever it is.

Such a plan would seek to strengthen partners who are already resisting ISIS: the Kurdish pesh merga, Sunni tribes, moderate forces in Syria, and effective units of Iraq’s security forces. Our partners are the boots on the ground, and the United States should provide them directly with arms, intelligence and other military assistance. This does not, however, mean supporting Iranian military forces, whose presence only exacerbates sectarian tensions that empower ISIS.

We should embed additional United States special forces and advisers with our partners on the ground — not to engage in combat, but to help our partners fight ISIS and direct airstrikes against it. Regional allies should play a key role in this effort. No one is advocating unilateral invasion, occupation or nation-building. This should be more like Afghanistan in 2001, where limited numbers of advisers helped local forces, with airstrikes and military aid, to rout an extremist army.

Still, we must face facts: A comprehensive strategy to defeat ISIS would require more troops, assets, resources and time. Such an undertaking should involve Congress. We have consistently advocated revising the Authorization for Use of Military Force that has provided congressional backing for counterterrorism operations since September 2001. Now could be the right time to update this authorization in light of evolving terrorist threats like ISIS. If Mr. Obama provides a coherent strategy and determined leadership, he could win Congress’s support.

Whether or not Mr. Obama listens to us, he should listen to leaders with a record of success in combating groups like ISIS, especially John R. Allen, Ryan C. Crocker, Jack Keane and David H. Petraeus, among others. He should consult with military and diplomatic experts like these, just as President George W. Bush did when rethinking the war in Iraq.

One of the hardest things a president must do is change, and history’s judgment is often kind to those who summon the courage to do so. Jimmy Carter changed his policy on the Soviet Union after it invaded Afghanistan. Bill Clinton changed his policy in the Balkans and stopped ethnic cleansing. And George W. Bush changed course in Iraq and saved America from defeat.

ISIS presents Mr. Obama with a similar challenge, and it has already forced him to begin changing course, albeit grudgingly. He should accept the necessity of further change and adopt a strategy to defeat this threat. If he does, he deserves bipartisan support. If he does not, ISIS will continue to grow into an even graver danger to our allies and to us.