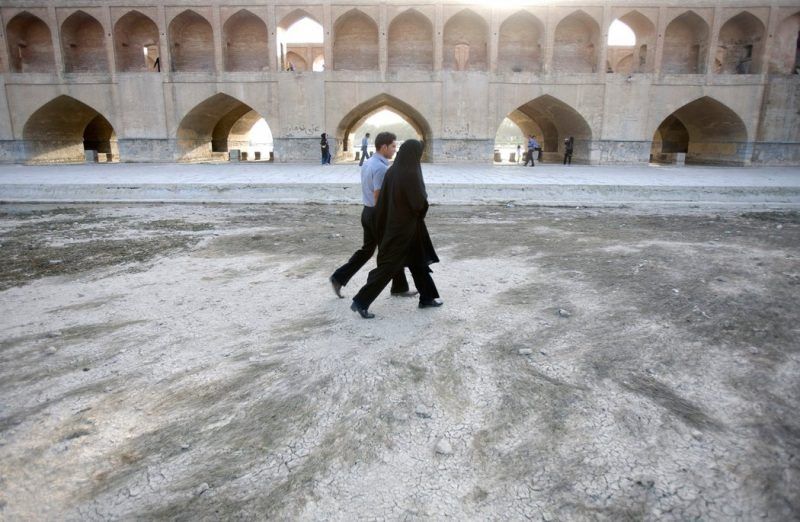 At its peak under the Safavid Dynasty (1502-1722), the Iranian city of Isfahan was seen as so glorious that it was nicknamed “half the world” for its boulevards, palaces, covered bridges and mosques, many of which remain to this day. The city, now home to nearly two million people and the country’s third-largest, was a cultural crossroads that attracted people from all over the world.

The major artery that ran through the city was the Zayanderud River, a thoroughfare that nourished some of the earliest civilizations in recorded history and sustained the people of Isfahan down through modern times. But for two years the river has been bone dry. It’s not that its banks have receded; they simply aren’t there anymore. In their place is a desertified riverbed.

The drying up of the Zayanderud is the most visible sign of a water crisis that poses a severe threat to the existence of this city. Groundwater levels have fallen, wells have dried up and ecosystems have been destroyed. The crisis requires strong steps from the national and local governments, which need to address inadequate and failed policies of previous administrations. It also might offer an opportunity for the West to find some common ground through its difficult relations with Tehran.

The reasons for Isfahan’s water crisis are many, but trouble began with a severe drought in 1999 that gripped large parts of the country. In the Isfahan region, the drought worsened in 2008 and persists to this day. This difficult but manageable situation was made far worse by political mismanagement.

Under former President Mahmoud Ahmadinejad, who held power from 2005 to 2013, the government took control of the watershed away from a unified water authority and split it among the self-serving leaders of the provinces it flowed through, who assigned the water for use in agriculture, industry and for domestic consumption without regard for protecting its supply. This was a politically motivated decision that proved popular in the short run but created damaging competition for a scarce resource.

Generous subsidies encouraged farmers to flood their crops with water without a thought to their market value or to conservation. In addition, provincial leaders encouraged the expansion of water-intensive industries, such as steel production, without due regard for the impact downstream.

Iran’s rapidly growing population did not help. The population has more than doubled over the last 40 years, and the new generation adopted modern lifestyles with high levels of water consumption. Tap water use in Isfahan is 70 percent above the global average in a region that only receives about a third of the global average amount of rainfall.

The central problem remains the authorities’ unwillingness to use pricing as a tool for fear of public disapproval. Since his election last year, President Hassan Rouhani has spoken repeatedly about the need to do away with the water policies of the previous administration. But this will require repealing populist laws at a time when he is already seen to be reversing other polices vested interests are keen to protect.

If the political will is there and Mr. Rouhani can gather the necessary support, his administration will need to reunify management of the river basin under a single body with the power to enact tough regulations and take a hard look at what sorts of development should be pursued in the region. The existing destructive and costly subsidies should be done away with, and water prices in the Isfahan region should be raised for both industrial and agricultural use. Should the local authorities prove unwilling to risk angering their voter base, the national government should intervene.

Investments should also be made in water-efficient technology. Just as resource-scarce countries like Japan have invested heavily in energy efficiency, water-scarce countries should do the same. Swift action will help to make the tradeoff between economic development and conservation less painful.

But even these measures may not be enough to reverse the ongoing desertification, in which case personal water usage will also have to be rationed. This would require installing metering systems for domestic water consumption and implementing a pricing system where heavy consumers, including industry, would bear larger costs.

Iran could also do with assistance from outside. The water crisis, in fact, presents an opportunity for a degree of rapprochement between Iran and the West, as well as the rest of the world.

Western nations should reach out to Tehran and propose the creation of an international body to advise Iran on the water crisis and environmental issues in general. This may seem idealistic, but there are many good precedents for outreach of this kind, including the China Council for International Cooperation on Environment and Development, a body founded in 1992 that advises China on environmental issues and whose membership includes representatives from several Western countries.

The private sector should also get involved. Too often environmental issues are framed in ways that cast the public and private sectors on opposite sides. But most sustainability issues require public-private cooperation. Many of the solutions available to Iran, like advanced metering devices for households, leakage detection systems or the replacement of inefficient piping, require large capital investments that the private sector could provide, along with international best practices and technology.

At a time when many Western nations, including both the United States and Britain, are seeking a more productive relationship with Iran, and when last month President Rouhani told the United Nations that the bad relations between Iran and the outside world are not “written in stone,” water conservation is the perfect issue on which to begin cooperation. It is something all can agree on: Iranian water shortages don’t benefit anyone.

Chandran Nair is the founder and C.E.O. of The Global Institute for Tomorrow, and the author of Consumptionomics.