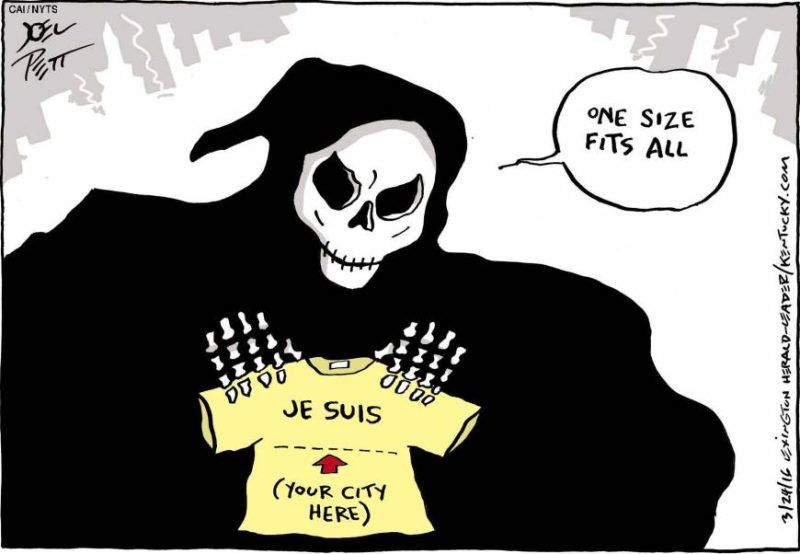 The Brussels bombings, like the Paris terror attacks earlier, are a reminder that jihadist-minded citizens of European Union states can turn into suicide killers by imbibing the insidious ideology of Wahhabism. Blaming the Islamic State group solely for the new terror in Europe risks condoning the role of the ideological mother of Islamist terrorist organizations — Wahhabism, whose international spread has been bankrolled especially by Saudi Arabia.

If Saudi Arabia is to be stopped from continuing to export radical Islamic extremism, the United States and Europe will have to make necessary adjustments in their policies. By wielding only carrots and no stick, the West allows the double-talking Saudi royals to run with the foxes and hunt with the hounds — at grave cost to the security of many countries.

Jihadism and sectarianism are institutionalized in Saudi Arabia, the only country in the world named after its founder, commonly known as Ibn Saud.

Saud, who ruled for 20 years until his death, brought the central part of the Arabian Peninsula under his control with British assistance in 1932, establishing a desert kingdom hewing to Wahhabism, a messianic radicalism from the 18th century that was considered a fringe form of Islam until oil wealth helped transform the once barren Saudi Arabia, the world’s largest country without a river.

Since the oil-price boom of the 1970s, Saudi Arabia has spent more than $200 billion on its global jihad project, including funding Wahhabi madrassas, mosques and books. Wahhabism legitimizes violent jihad with its call for a war on “infidels.” After a married couple of Pakistani origin staged a mass shooting in San Bernardino, California, U.S. President Barack Obama alluded to Wahhabism as a “perverted interpretation of Islam.”

Saudi funding has helped spread radical Sunni extremism across Africa and Asia and opened a new threat to European nations with significant Muslim minorities. Indeed, Wahhabism’s export is making the tolerant and heterodox Islamic traditions in many countries extinct.

Yet the rest of the world — in thrall to Saudi money and reliant on Saudi oil — has largely turned a blind eye to the kingdom’s jihadist agenda.

Europe’s new terror is a reminder that Saudi Arabia’s Wahhabi fanaticism is the root from which Islamist terrorists and groups draw their ideological sustenance. As U.S. Vice President Joseph Biden said in a 2014 Harvard speech, Saudi and other “allies’ policies wound up helping to arm and build allies of al-Qaida and eventually the terrorist Islamic State.”

Saudi Arabia, however, has faced little international pressure even on human rights, despite having one of the world’s most tyrannical regimes.

How the kingdom buys up world leaders is apparent from the Malaysian attorney general’s recent disclosure that the $681 million deposited in Prime Minister Najib Razak’s personal bank account was a “personal donation” from the Saudi royals and that $620 million of it was returned. Saudi Arabia has given between $10 million and $25 million to the Clinton Foundation, which last year also received a separate donation from a charitable foundation established by Saudi Prince Alwaleed bin Talal.

Saudi Arabia is today engaged in war crimes in Yemen, where it is waging an air war against Iranian-backed Houthi rebels. A United Nations panel of experts said in October that the Saudi-led coalition had committed “grave violations” of the Geneva Conventions by targeting civilian sites in Yemen. Still, the Saudi military is failing in its war in Yemen. With the rebels still in control of Sanaa, the capital, the Saudis are getting bogged down in a bloody quagmire.

Meanwhile, the House of Saud, with its own future more uncertain than ever, is increasingly playing the sectarian card in order to shore up support among the Sunni majority at home and to rally other Islamist rulers in the region to its side.

Having militarily crushed the Arab Spring uprising in Sunni-led but Shiite-majority Bahrain, Saudi Arabia early this year executed its own Arab Spring leader — Sheikh Nimr al-Nimr — who had led anti-regime Shiite protests in 2011.

Before the execution, the kingdom formed an alliance of Sunni states purportedly to fight terrorism. The coalition included all the main sponsors of international terror, such as Qatar, Pakistan and, of course, Saudi Arabia. It was like arsonists pretending to be fire wardens.

When the anti-terror coalition quickly became the butt of international ridicule, King Salman of Saudi Arabia resorted on a mass scale to what his country is notorious for as the global leader in beheadings. He ordered the execution on terrorism charges of 47 people on a single day, including Nimr al-Nimr. Most were beheaded in a style associated with the Islamic State.

The royals seem to mistakenly believe that widening the sectarian fault lines across the Islamic world will keep them in power. By drawing legitimacy from jihadism and by being beholden to sectarianism, the royals could be digging their own graves. After all, fueling jihadism and sectarianism threatens to empower extremists at home and devour the royalty.

The crash in oil prices is already compounding the royals’ challenges at home. Discontent is growing quietly, even as aggressive activism defines King Salman’s foreign policy.

Against this background, it has become imperative for the West to stop looking the other way as Saudi Arabia exports jihad.

The U.S.-led war on terror must target not just the effect but the cause of terrorism, especially the central role Saudi Arabia plays through its religious-industrial complex in spreading jihadism. For example, proselytizing efforts by Saudi Arabia — and, to a lesser extent, by Qatar and some other oil sheikdoms — have helped train thousands of imams or teachers in Wahhabism to deliver radical sermons at petrodollar-funded mosques in many countries.

The war on Islamist terror cannot be won without closing the wellspring that feeds it — Wahhabi fanaticism. Wahhabism is the ultimate source of the hatred that triggered the Sept. 11, 2001, strikes in the U.S., the 2008 Mumbai attacks, and the recent Paris and Brussels terror. Shutting that wellspring demands that the West stop viewing Saudi Arabia as an ally and treat the kingdom as a core part of the problem.

The world’s chief ideological sponsor of jihadism must be held to account for spawning the kinds of dangerous extremists that are imperiling regional and international security.

Without stemming the spread of dangerous ideologies like Wahhabism, the global war on terror will never be won. As long as “jihad factories” operate, there will be suicide killers. This is why the late Singaporean leader Lee Kuan Yew correctly said in 2003 that success of the war on terror hinges more on controlling the “queen bees” — the “preachers” of the “deviant form of Islam” — than on just killing the “worker bees” (terrorists).

A longtime contributor to The Japan Times, Brahma Chellaney is a geostrategist and the author, most recently, of Water, Peace, and War.