The Obama administration must help the Iraqi government retake the city of Mosul from Islamists and stem their march toward Baghdad. But military aid will not be enough. For lasting success, the United States must compel Iraq’s divisive leadership to pursue government by reconciliation just as vigorously as it pursues battlefield victory.

We have learned the hard way that military counterinsurgencies that do not address political grievances always fail. Unless the Shiite-led Iraqi government adopts radical reforms that address the complaints of Iraq’s Sunni minority, an influx of American weapons will only add fuel to the fire consuming the country. 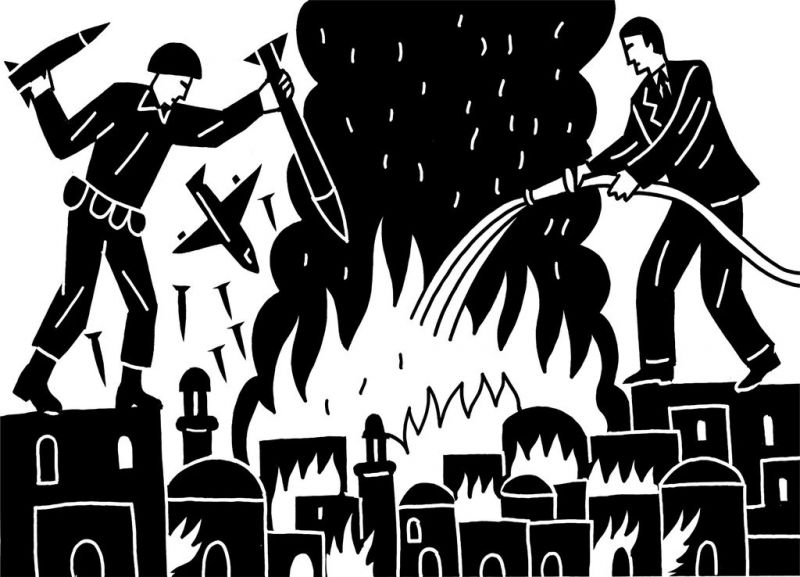 On Tuesday, Mosul, Iraq’s second largest city, fell to Islamist militants led by a breakaway group of Al Qaeda, the Islamic State of Iraq and Syria, or ISIS. That puts ISIS, a leading force in the Syrian civil war, dangerously close to its goal: establishing a militant Islamist ministate straddling the two most violent countries in the Middle East. The United States simply cannot allow this, and the Obama administration is indeed responding by pouring military aid into Iraq.

The scope of the militants’ victory shows how desperate the situation is. When ISIS fighters swept into Mosul, a largely Sunni city, they faced virtually no resistance; the armed forces in and around the city shed their uniforms and fled. An estimated 500,000 residents also fled. Having consolidated control over Mosul, the militants then continued south. They captured the Qaiyara air base, the restive towns of Hawija and Salman Beg, and then the city of Tikrit, more than halfway to Baghdad itself.

The blitz shocked Baghdad and Washington, but Iraqi militant groups had been gaining ground for months. They have held the town of Falluja for half a year, despite Iraqi Army bombardments. In April, they seized a nearby dam on the Euphrates River and flooded surrounding areas to thwart any counteroffensive.

Even so, the fall of Mosul is a game-changer. The city is a commercial, political and military hub. The extremists have seized American-supplied weaponry, including armored vehicles. Mosul is at the heart of Nineveh Province, which has a 300-mile border with Syria. Across it, militants already exchange arms, money and men with comrades fighting the government of President Bashar al-Assad. A pipeline from Kirkuk, Iraq, to Ceyhan in Turkey is nearby. A long ISIS occupation could be ruinous for Iraq.

Prime Minister Nuri Kamal al-Maliki has called on Parliament to declare a state of emergency, which would greatly expand his powers. They could include imposing a media blackout, restricting movements of citizens, enforcing curfews and devolving sweeping powers to the military. He has called on civilians to join the army and may try to boost the army’s resolve by incorporating violent Shiite groups in his plans.

But such a move would only make the military situation worse. Iraq’s Sunnis have long felt sidelined in the Shiite-majority state, and a sense of being attacked by Shiite militants could well lead to a huge surge in Sunni support for ISIS.

This crisis comes just two weeks after the results of a parliamentary election were announced, with a new government yet to be formed. Mr. Maliki’s coalition won more seats than any other group, but opposing parties have banded together, trying to oust him. Now the fall of Mosul may derail efforts to form a new government, leaving Mr. Maliki unlimited powers to silence political opponents.

The United States must use its assistance as leverage to prevent Mr. Maliki from becoming, in effect, a dictator. Many young Iraqis who join the Sunni militants already see the government as a sectarian oppressor. The Maliki government has targeted senior Sunni politicians, and failed to respond to Sunni demands for reform. Its exclusionary approach has helped enable extremism, and the United States must ensure that Mr. Maliki does not use the new outbreak of fighting to shore up his authority.

Moreover, the United States must compel the Iraqi Army to adopt a sensitive, population-centered approach to reversing the militants’ conquests. If the Iraqi Army sends Shiite militant groups or Kurdish forces to the heart of Sunni-dominated Mosul, or if it carpet-bombs the city and arbitrarily arrests or kills groups, it will alienate the hearts and minds essential to winning this battle.
Continue reading the main story82Comments
ISIS is showing that it knows the importance of the Mosul population’s support. A contact of mine inside the city has quoted ISIS figures in the local mosque saying: “We are your brothers. There is nothing to be scared of. We are here to help you.” They encouraged residents to return to work, promised to protect them, and said they would to try to provide necessities like gasoline. Such efforts make it critical that the government’s military response is guided by a strategy to reclaim the confidence of Sunni Iraq.

The United States must also insist that Mr. Maliki’s forces shield the residents of Mosul during any counterattack, and that his government make concessions to Iraq’s Sunnis that he may deem unpalatable: radically easing the de-Baathification law, which Sunnis see as discriminatory; releasing Sunni prisoners held without charge; empowering Sunni politicians who have been sidelined; dropping charges against the popular Sunni leader Rafi al-Esawi; and moving toward letting Sunni regions become locally administered federal territories. However unpopular such reforms may be with non-Sunnis, the alternative is wave after wave of violence from a resentful and despondent Sunni constituency.

Even now, on the brink of a breakup of Iraq, the United States has an opportunity to stem the appalling growth of extremist militancy at the heart of the Arab world — but only if it remembers that wars of counterinsurgency must defuse political grievances.

Nussaibah Younis is a research fellow in the international security program at the Belfer Center for Science and International Affairs at Harvard Kennedy School.