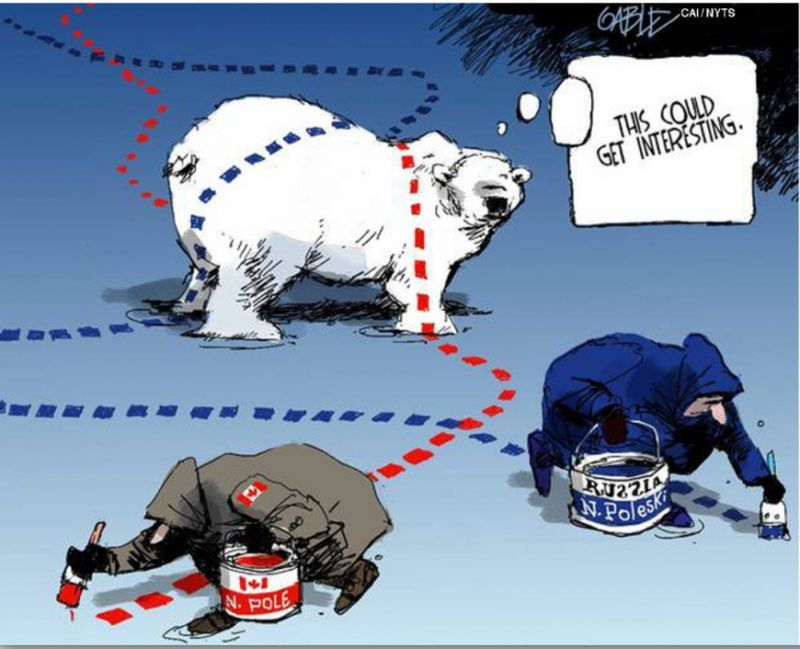 A couple of years ago, a Canadian minister proudly declared that Santa Claus was a citizen of Canada. After all, his home and toy factory are at the North Pole, which, according to the minister’s interpretation, belongs to Canada.

Though Santa Claus has not commented on the matter, it is now clear that he could choose several passports when he travels the world. In 2007, a privately funded mini-submarine planted a Russian flag directly beneath his alleged home. And last month, Denmark, which has sovereignty over Greenland, staked its own territorial claim, also covering the North Pole.

By filing its claim with the United Nations Commission on the Limits of the Continental Shelf, Denmark has joined our era’s “great game”: the contest for economic control over a large part of the Arctic. And Denmark’s claim is massive. Not only does it seek sovereignty over everything between Greenland and the North Pole; it is also extending its claim to nearly 900,000 sq. km, all the way to the existing limits of the Russian economic zone on the other side of the Pole — an area 20 times Denmark’s size.

How to assess countries’ claims to Arctic territory hinges on the status of the Lomonosov Ridge, a vast formation that rises from the sea floor and stretches 1,800 km from Greenland to the East Siberian continental shelf. Everyone agrees that it is a ridge. The key question is whether it is an extension of the Greenland shelf or an extension of the East Siberia shelf.

Denmark, together with the government of Greenland, now claims that it is the former, giving it the right to extend its economic zone across a huge area at the top of the world. Though nothing is yet known about the claim that Russia says it will present in the spring, there is no doubt that it will argue the opposite.

And what about the Canadians and their claim? That remains to be seen, but there have been reports that Prime Minister Stephen Harper is dissatisfied that Canadian scientists are not being sufficiently aggressive in pressing the country’s case.

Nonetheless, for all the hype about a “race for the Arctic,” and despite the rather icy atmosphere among the claimants, there is little reason to fear conflict. Under the terms of the 2008 Ilulissat Declaration, all of the countries bordering the Arctic Ocean agree to resolve their claims peacefully and based on the U.N. Convention on the Law of the Sea. According to settled procedure, a U.N. commission will first judge whether the claims have merit. If they are overlapping, which is highly probable, bilateral negotiations will be held.

Such talks, to put it mildly, could take time. Norway and Russia negotiated over a far smaller territorial delimitation for four decades.

Both Denmark and Russia have been devoting significant resources to exploring the Lomonosov Ridge. Denmark has hired Swedish icebreakers for repeated expeditions, and Russia has been deploying special submarines to obtain samples from the ridge and the ocean floor.

The Arctic region has always been strategically vital for Russia, accounting for roughly 85 percent of Russia’s natural-gas production, which is based primarily in Western Siberia. The Kremlin has activated a new military command for the Arctic, and is busy reopening air bases and radar stations along its Arctic shoreline.

But it is a very long way from these new Russian bases to virtually everywhere. And, in addition to the vast distances, there is the harsh climate. A Canadian military commander, asked what he would do if foreign soldiers attacked his country’s Far North, calmly replied that he would dispatch an expedition to rescue them. Though Russia had hoped for a rapid increase in shipping along the Northern Sea Route, commercial traffic last year fell by 77 percent.

Of course, the stakes are too high for Canada, Denmark, and Russia to allow the region’s remoteness and its hostile environment to influence how resolutely they press their claims. Boundaries like these are fixed once and forever, and no one knows what discoveries, technologies, and opportunities the future might bring.

But for the time being, neither Santa Claus, nor anyone else, has reason to be worried. The nature of the Lomonosov Ridge will be debated for years to come, while his thoughts — and ours — are likely to be focused on more immediate issues.