On New Years Eve, women were allegedly molested en masse by groups of men on the streets of Bangalore, a South India city famous for its software and tech industries — India’s answer to Silicon Valley.
Claims of this «mass molestation» came almost exactly four years after the tragic gang-rape of a young woman on a moving bus in New Delhi brought the issue of sexual violence and women’s safety to the fore in India, and around the world.

Bangalore is one of India’s most cosmopolitan cities, known for its diversity, scientific attitude and technical prowess. Young people from across India flock there for jobs.

The tech industry in particular has been known to be woman-friendly, with 30 per cent of its work force made up of women. That this sort of incident allegedly took place in the heart of Bangalore — where 1500 police men were deployed to control revelers — is not just a clear failure of governance, but also an indication that patriarchy still triumphs in a country which complex cultural changes are underway.

This generational clash of tradition versus modernity is perhaps best explained by some of the political responses to this horrific incident. G. Parameshwara, the Home Minister of Karnataka — the state in which Bangalore is in — blamed the problem on young people who «try to copy westerners, not only in their mind-set but also in their dressing.» The result, he said, was «some disturbance, some girls are harassed, these kinds of things do happen.»

Another political leader, Abu Azmi, from Uttar Pradesh, India’s most populous state, also blamed the incident on Westernization and the «short clothes of women.» He told CNN-News18, «If my daughter goes out with another man to celebrate the New Year and her father or husband is not with them, do you think she will be safe?»

Such statements from elected leaders are not only deeply disturbing, they place the blame on women.

I spoke to several young women who had moved to Bangalore to escape life in their small-towns. For example Sarita, 30, went to Bangalore to get away from family pressure to marry her cousin-. Bangalore has been a haven — a city where she can lead an independent live, rent a flat, get a job to work, and even go out with her friends. On New Year’s Eve, Sarita had been right around the corner from the site of the alleged crime, getting drinks with a group of her friends.

While she had been deeply upset by the incident, she had not been shocked. She said she was not surprised with what had happened and that she was contemplating moving back home to her family. According to Sarita, Bangalore has been changing in the past few years and the sex ratio of the city feels drastically skewed. Sarita, I know from my own research, has hypothesized correctly. An imbalanced sex ratio is often an indicator of increased crime and violence in society.

While the «Western» lifestyles politicians have alluded to have certainly empowered women like Sarita, concerns about safety is the single largest factor holding them back.

When I speak at college campuses in India, young women often tell me that their parents will not allow them to get internships or jobs because of the commute involved. Moving to another city is out of the question because of the risk of independent living.

Even I, living as a single woman in central New Delhi, in what is considered a «VIP zone», will not take taxis after 9pm. If I am compelled to, I make sure that I am in a group, preferably co-ed. 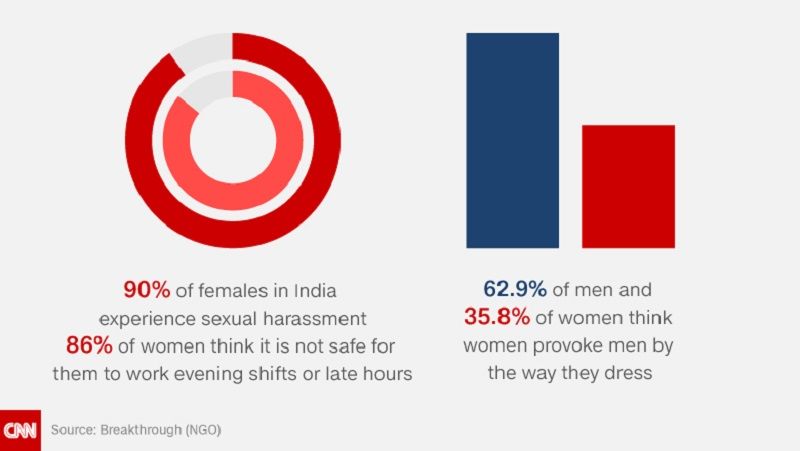 I do not walk the streets alone after dark. If I do, it is with a sense of fear and with pepper spray in my hand. When I speak to young women, I advise them to do the same: «Our government cannot be trusted to protect us, so make sure you are geared to protect yourself.»

I have puzzled over the research, the politics, the psychology and wonder if there is a solution to India’s gender problem. Better governance is one part of the solution. Stricter action and more stringent punishment for the accused is another. These measures have been enacted for rape and while they may not have proven to be hugely effective, they have instilled a sense of fear. But I doubt if fear is a good long term solution to any problem at all.

A longer term solution towards gender-sensitization may come from a ‘soft culture’ approach through television, film and conversations. For example, the government has offered tax incentives for Bollywood films that increase awareness on women’s rights. This worked very well for Dangal, a recent film based on the life of female athletes in rural India.

The hard truth is that India simply cannot become the developed nation Prime Minister Narendra Modi promises when half of its population feels unsafe leaving their homes and are unable to contribute to the country’s burgeoning economy. This especially cannot happen when the nation’s leaders harbor regressive, misogynist and deeply damaging views.

The mass molestation allegations on the brink of the new year has been a wakeup call to the nation. In 2017, India needs to make women’s safety and gender sensitization a major part of its development story — otherwise the nation risks being left behind

Ira Trivedi is an author and journalist based in New Delhi. She is the author of Nikhil and Riya and India in Love: Marriage and Sexuality in 21st century India. The opinions expressed in this commentary are hers.