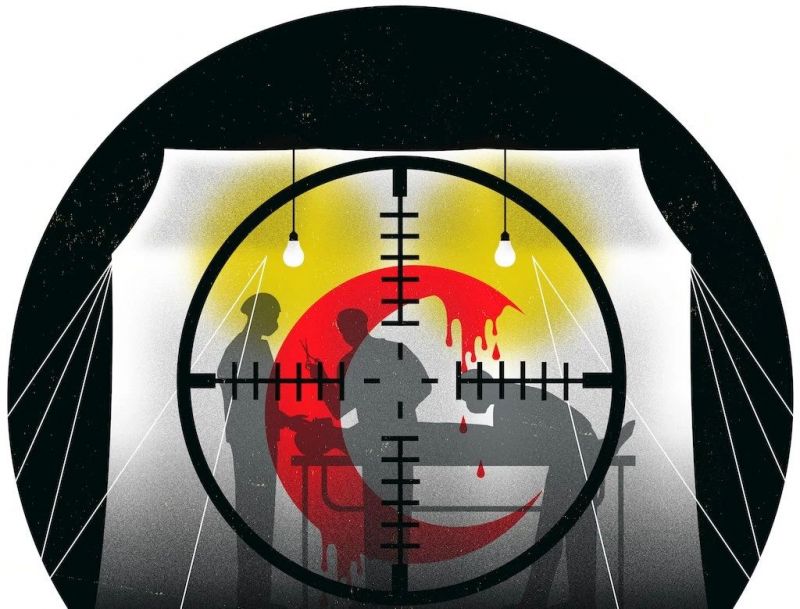 Marwan was on the operating table when the lights blinked and fizzled out. I turned on the headlamp I wear for situations like these, but it flickered, indicating low batteries. The nurse to my left pulled her cellphone from her pocket and turned it on, creating the only light in the pitch-black basement. Others in the room followed suit with their phones, shining the devices at the wound and producing just enough light to allow me to finish repairing the little boy’s broken body.

Marwan had arrived at my field hospital, which was built underground to avoid bombardment, after losing his mother, sister and both of his legs in a barrel bomb attack late last year. In recovery after the surgery, he asked me in a timid voice, “Will I be able to go to school anymore?”

In another incident, two weeks later, we worked hard to stabilize a man with a severe leg fracture. We loaded him and two other patients into an ambulance to take them on the 90-minute journey to the Turkish border, where they could receive better care in safer conditions.

Just as they headed out, another barrel bomb struck, landing next to the ambulance. The paramedic was the only survivor.

After four years of war in Syria, stories like this are all too common. I am a surgeon operating in Aleppo, a city in the northwest still partially held by the armed opposition — though under increasing pressure from Syrian government forces. I have witnessed countless attacks like these and the toll they continue to take on my patients, my city and my country, which lies in ruins.

The United Nations estimates that some 220,000 of my fellow Syrians have died during this conflict. I believe the true number of fatalities could be twice as high. After a barrel-bomb strike, an accurate casualty count is almost impossible; many bodies are buried under rubble and cannot be recovered.

The United Nations’ figure also does not account for the hundreds of thousands of Syrians who have been “disappeared.” Some may be in jail, but many, we expect, have been killed. The government told us that a relative of mine, a pharmacist, was dead; but no body has been returned to his family.

While the world’s attention is focused on the horrors perpetrated by the Islamic State in other parts of my country, the daily terror of barrel bombs is our gravest threat. The denials of President Bashar al-Assad about the use of these weapons ring hollow, for we are living through a hurricane of barrel bombs dropped by his regime.

These are old oil barrels, filled with up to a ton of explosives, nails, gasoline and even chlorine or other chemical agents. Dropped from a high altitude over heavily populated areas, they are crude, ruthless and indiscriminate.

A favorite regime tactic is to drop several in sequence in order to kill or maim the ordinary Syrians who have come to help the victims of the first attack. The lucky ones, like me, who have so far avoided death are subjected to the daily terror and crippling fear of the next helicopter-borne barrage of horror.

Many of my colleagues have not been so lucky. The organization Physicians for Human Rights has documented some 233 attacks on medical facilities and more than 600 health professionals killed (97 percent of whom died, they estimate, in government-led attacks).

Human Rights Watch has documented more than 1,000 barrel-bomb impact sites in Aleppo in the year since the Security Council passed Resolution 2139, which called for an end to their use in populated areas. The Security Council, including the United States, promised “further steps” if this didn’t happen.

And yet the helicopters come. The chop-chop-chop of their blades causes panic every time. And the barrel bombs continue to rain down, on our homes, on our schools and on our hospitals, often at a rate as high as 50 per day.

Why do I stay? Because it would be strange not to: This is my city. People are being killed every day. It is my duty.

The government has recently made advances into the opposition-held areas around Aleppo, raising the specter of a siege that would have devastating consequences. Our access to the little humanitarian and medical assistance that does trickle in would be cut off. A renewed government assault on the city would put scores more Marwans on my operating table, but prevent us from receiving the medical equipment and supplies we need to save their lives.

I am a doctor and a humanitarian, not a military man: It is not for me to say how the international community should protect civilians. I only know that the bombing must be stopped by all means necessary, that the carnage must end, that civilians need a protected zone where they feel safe to go about their daily lives. The Syrian government should be held accountable for the war crimes it commits every day by using barrel bombs to kill civilians and target hospitals and schools.

The United States and the international community must look beyond addressing the Islamic State alone, or simply providing humanitarian assistance. While we work toward a political resolution of the conflict, civilians need protection now — and that requires serious American leadership.

Abdel is a Syrian doctor. His full name is being withheld to protect his safety.