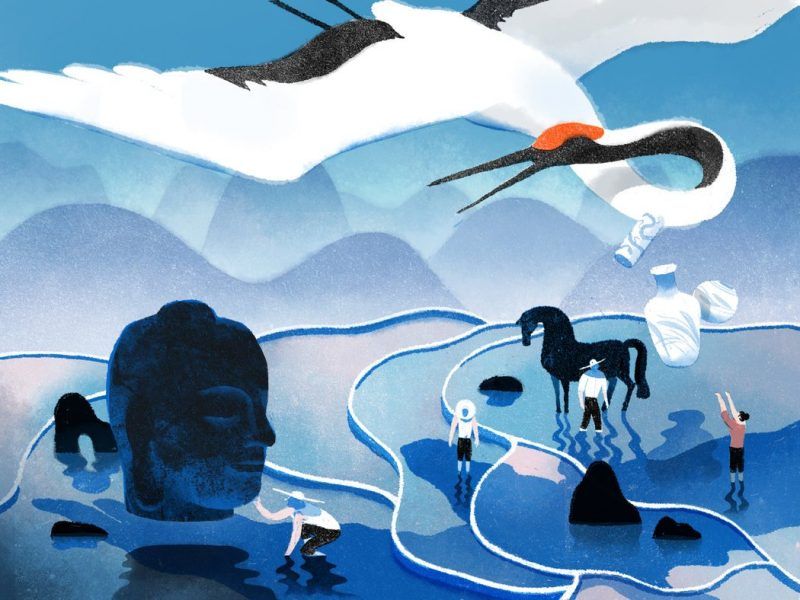 Over the course of five days in March, Christie’s auctioned off the holdings of the dealer Robert H. Ellsworth, who, before his death last year at age 85, filled his 22-room apartment on Fifth Avenue in Manhattan with what was said to be one of the world’s most comprehensive private collections of Asian art, earning him the nickname “King of Ming.” The sale fetched $134 million, nearly four times the presale estimate of $35 million.

Chinese art has become a prized liquid asset for superrich collectors, who, instead of putting their treasures on display, often deposit them in carefully guarded, climate-controlled warehouses. But the media’s emphasis on the white-hot market for contemporary Chinese works overlooks a more interesting story: the effort by the Chinese government, state-run companies, private collectors and even, quite probably, some criminal networks to bring Chinese antiquities back home.

One impetus for this effort is the Communist Party’s embrace of traditional culture as “a foundation for China to compete in the world,” as President Xi Jinping said in October. Having for decades viewed antiquities as relics of feudal oppression and bourgeois decadence, the party now says art can “lead people to live a life abiding by the code of morality,” in that way contributing to social stability. This is a turnabout from the Cultural Revolution (1966-76), when museums were ransacked, and countless antiquities destroyed. Old art is again prestigious; new buyers seek canonical work for the social status, not just potential profit, it confers.

The party has taken its new stance on culture at a time of rising nationalism. China openly promotes efforts to repatriate works pillaged during its self-defined “century of humiliation,” from the Opium Wars of the 1840s and 1850s to the establishment of the People’s Republic in 1949.

Perhaps the most notorious affront in that period was the sacking of the magnificent Old Summer Palace by British and French troops encircling Beijing in 1860, at the end of the Second Opium War. The invaders torched or leveled as many as 200 buildings, stripping the nearly thousand-acre site of sculptures, silk robes, jewelry and even Pekingese dogs, then unknown in Europe. (Queen Victoria was presented with a puppy, named “Looty.”)

The destruction was ordered by one James Bruce, the eighth Earl of Elgin — whose father had, some 60 years earlier, ordered the removal of the friezes from the Parthenon in Athens. For decades, Greece has vainly demanded that Britain return the Elgin marbles (which are on permanent display at the British Museum), even going so far as to construct a museum that would house them.

China has taken a different approach: Instead of pressing formal demands for repatriation, it lets money do the talking. Through a corporate offshoot of the People’s Liberation Army, the China Poly Group, the government has turned the auction block into a patriotic battlefield.

Take, for example, 12 animal heads wrenched from a zodiac fountain that once glistened below the European-style Hall of Calm Seas at the palace. In 2000, auctions held in Hong Kong by Sotheby’s and Christie’s featured three of the heads. China’s Bureau of Cultural Relics urged the auction houses to withdraw the bronzes, citing a Unesco convention.

When both companies declined and the auctions went ahead, the winning bids were cast by the Poly Group. They went on view at the Poly Art Museum in Beijing, which subsequently secured three more zodiac heads. One of the three was donated by a Macao gambling tycoon; the other two were bid on at a 2009 Christie’s sale in Paris by a Chinese buyer who then refused to pay for them. In 2013, François-Henri Pinault, whose company owns the auction house, gave them to China as a good-will gesture.

Of course, many art works never come up for auction. Perhaps the greatest enigma in Chinese art today is a little-reported crime wave in Europe that, since 2010, has targeted antiquities that were looted from the Old Summer Palace or from Beijing’s Forbidden City in the early 20th century.

The string of thefts is believed to have started in August 2010 with a break-in at the Chinese Pavilion on the grounds of Drottningholm Palace, the royal residence near Stockholm. Five months later, burglars in Bergen, Norway, made off with 56 items from the China Collection of the KODE Art Museums, mostly antiquities gathered by Johan Wilhelm Normann Munthe, a military adventurer who served in the Boxer Rebellion.

In April 2012, intruders broke into the Malcolm MacDonald Gallery at the Oriental Museum at Durham University in England, filching a porcelain sculpture and jade bowl together valued at about $3 million. That same month, thieves made their way into the Fitzwilliam Museum at Cambridge University, making off with 18 “culturally significant” objects, notably Chinese jades.

In January 2013, some 25 Chinese artworks were stolen in a second theft at the museum in Norway. The museum closed its China Collection to visitors and, in an arrangement brokered by a Chinese entrepreneur, seven of 21 marble plinths taken from the Old Summer Palace were promised to Peking University.

Finally, only three months ago, burglars pilfered 15 gold, bronze and porcelain masterworks in the Château de Fontainebleau, the former royal retreat south of Paris. In a seven-minute sweep, they outwitted alarms and cameras as they smashed display cases within the palace’s Chinese Museum, founded in 1863 by Empress Eugénie, wife of Napoleon III. “They knew very well what they were after,” said the chateau’s president, Jean-François Hebert.

Why steal documented works that can neither be legally sold nor openly exhibited? “Chinese laws, on everything from theft to intellectual property, are very different from those in the West, and therefore stolen or forged artworks find a market far more easily there than abroad,” Noah Charney, an art crime expert, said after the Norway thefts. “A certain type of Chinese collector would be far less shy about purchasing a knowingly stolen artwork than a Western collector would. Chinese collectors could purchase stolen Chinese art and still have the pride of display, perhaps with the rationale that, whether or not the object was stolen, it should be in China, and therefore the collector was somehow aiding its liberation.”

As Paul Harris, a leading British dealer of Chinese art, wrote in a blog post in March: “The general feeling in intelligence circles is that this was ‘an ordered job’ carried out by local French professional criminals acting as agents for a third party. That third party is almost certainly abroad, well away from French jurisdiction and, according to one intelligence expert, ‘The smart money is on the artifacts being on the way to the People’s Republic of China.’ ”

Granted, speculation is not evidence.

But in a revealing footnote to the Fontainebleau heist, France is involved in backstage discussions regarding the return of 30-odd gold pieces illegally unearthed more than two decades ago in China’s Gansu Province. They were donated to the Musée Guimet, an Asian art museum in Paris, by the art dealer Christian Deydier and by Mr. Pinault’s father, François Pinault, whose fashion houses include Gucci and Saint Laurent (with a large footprint in the Chinese market). But now the plan to return the antiquities has been caught in a legal maze, since gifts to French museums are in theory irrevocable.

So far there is nothing to demonstrate that Beijing has anything to do with the thefts. What’s clear, though, is that the West and China need a more open conversation about art and where it belongs. Unesco has estimated that 1.67 million Chinese relics are held by 200-plus museums in 47 countries. Many Chinese want much of it back. Whether and how that goal is realized will be one of the art world’s big stories for years to come.

Karl E. Meyer is a former member of the New York Times editorial board and the author, with Shareen Blair Brysac, of The China Collectors: America’s Century-Long Hunt for Asian Art Treasures.