By now the image of the demise of the dinosaurs has become iconic: a luckless tyrannosaur looking over its shoulder as a colossal fireball from heaven bears down on the horizon, the monster’s death by vaporization imminent.

Hanging above the desk of the Princeton geologist Gerta Keller, though, is a different artist’s depiction. This time it’s a pair of tyrannosaurs — still doomed — but not by an errant space rock. In this picture they’re writhing on the ground in a withered landscape as eruptions from volcanoes and fissures in the ground tear the earth apart.

These dinosaurs were killed not by the lava itself, but by the environmental catastrophe unleashed by the volcanic gases. It was an end time of global warming, acid rain and acidifying oceans that might sound familiar today as a vast body of scientific research warns us of our own developing ecological crisis.

The difference between these two pictures represents one of the most acrimonious battles in science. 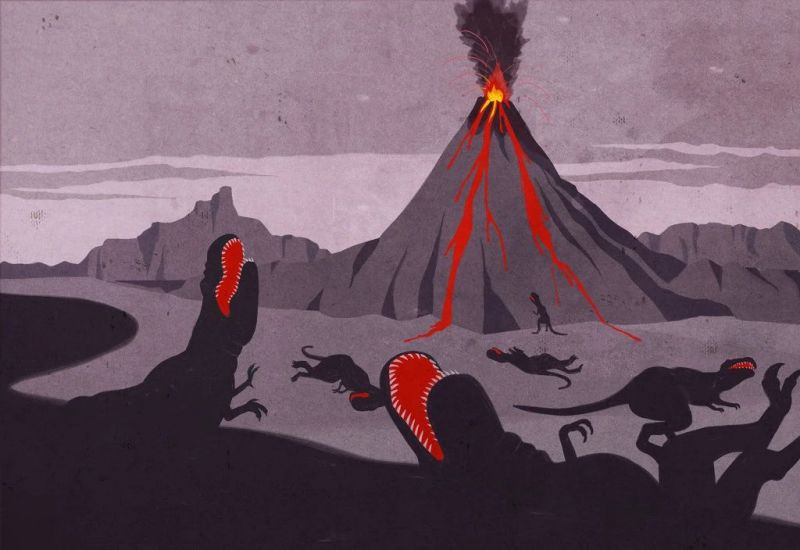 The fireball image was born in 1980 when the father-son team of Luis and Walter Alvarez at the University of California, Berkeley, dropped an asteroid on the unsuspecting fields of geology and paleontology, neatly explaining away one of the most vexing problems in science — the death of the dinosaurs.

Their salvo landed in the journal Science in a paper still regarded with a remember-where-you-were-when-you-first-read-it reverence. In the paper, the Alvarezes pointed to traces of extraterrestrial dust in the geologic record coincident with the extinction, a finding that was later buoyed by the discovery of a 110-mile impact crater centered in Chicxulub, Mexico.

The theory — positing a day of hellfire and months of darkness as dust and smoke from the impact and fires blotted out the sun — was as sensational as theories get. Professional and personal relationships were strained and sometimes broken as scientists hitched their careers to the flashy new theory, or clung to earthbound causes for the mass extinction.

In the past few decades, as a consensus has calcified around the asteroid theory, perhaps no one has endured more ostracism than Dr. Keller, who has long pointed to enormous floods of lava in India, called the Deccan Traps, as an alternate explanation for the demise of three-quarters of all animal and plant life. But her sojourn in the academic wilderness may be ending as more evidence emerges for the deadliness of these volcanoes.

The planet has endured five major mass extinctions in which most of its fauna was wiped away in a geologic eye blink. They are known as the Big Five. Some, like the End-Permian mass extinction, 252 million years ago, were even worse than the catastrophe that wiped out the dinosaurs.

These events had long been mysterious; some 19th-century natural philosophers viewed the reboot of the biosphere that followed them as evidence of separate acts of divine creation. With the introduction of the Alvarez hypothesis, there was now a plausible and testable mechanism for these apocalypses. Geologists set out across the planet, scouring the fossil record for evidence of asteroid impacts at each of the other crises in Earth’s history. They came up empty.

Plausible candidates, like the 62-mile-wide Manicouagan crater in Quebec, now a circular system of lakes, seemed to fit the bill. The asteroid that created it was large enough, computer models showed, to have wiped out up to a third of life on Earth. But when the crater was dated, there was no evidence of such a catastrophe.

Other enormous impacts, like the one that created the Chesapeake Bay 35 million years ago, left no discernible echoes in the fossil record, either.

While evidence for asteroids at the other mass-extinction boundaries was hard to come by, researchers did find a coincidence in time with continent-flooding cascades of lava on a scale unimaginable today.

How these lava flows, known as large igneous provinces, rendered their destruction is an active area of study, but some clear signatures appear at many of the episodes, including huge injections of carbon dioxide into the atmosphere, intense global warming and ocean acidification as carbon dioxide was absorbed by the seas.

In Siberia, one such volcanic province spewed so much carbon into the air that parts of the ocean reached — as one paleontologist put it — the temperature of “hot soup.” Seas became more acidic, as they are becoming today, and calcifying animals like corals died en masse, along with 96 percent of ocean life during the End-Permian extinction.

We now know, through the dating of the Palisades across from New York City, that 50 million years later, virtually the same thing happened at the end of the Triassic, when lava gushed from the seams of the supercontinent Pangaea as it tore apart.

That brings us, 135 million years later, to the most recent of the Big Five: the extinction of the nonbird dinosaurs, along with much else that was living at the time. It has long been known that huge areas of western India were being smothered in lava, in some places more than a mile deep, close in time to the extinction. Asteroid proponents have long dismissed this volcanism as an irritating coincidence — the smoking gun having already been placed satisfactorily in the hands of a culprit from outer space.

But Dr. Keller’s team, led by her Princeton colleague Blair Schoene, recently dated the Indian lava flows with the same precise radiometric dating techniques that have recently tied other massive lava flows to mass extinctions. The most destructive phase of volcanism, the scientists found, took place over less than 750,000 years, a geologically brief span, and overlapped the extinction.

Dr. Keller points to rocks in Texas, Tunisia and elsewhere that indicate warming episodes of at least 7 degrees Fahrenheit in under 10,000 years, with acidifying oceans that killed all but the hardiest life-forms, which then thrived for millenniums.

Still, few are ready to demote the role of the dinosaurs’ asteroid, which created a crater larger than any found in the half-billion-year history of animal life. Some experts still contend that it was the lone killer. But many now lean toward a one-two punch of a planet weakened by volcanoes and then crippled by the asteroid. Or vice versa. Or perhaps the coincidence in time between the asteroid, the volcanoes and the extinction, is not a coincidence at all.

At a meeting in October of the Geological Society of America, Walter Alvarez patiently looked on as Dr. Keller presented her work dismissing his asteroid theory. When it was time for Professor Alvarez’s Berkeley collaborator, Mark Richards, to present his team’s paper, Dr. Richards admitted the destructive potential of the Deccan Traps and called their proximity in the fossil record to the asteroid “the 8,000-pound gorilla in the room.” Perhaps, he said, there was even a causal link between the asteroid — which induced a magnitude 12 earthquake — and the most destructive period of Indian volcanism.

As another author of the paper, Paul Renne of Berkeley, explained to me, the asteroid might have perturbed Earth’s mantle and turned an already disastrous volcanic episode in India apocalyptic. The work borders on speculative at this point and is far from an endorsement of Dr. Keller’s conclusions, but it is still a fragile olive branch in a field where few have been extended in recent decades.

“It may be that Chicxulub was the gun and the Deccan Traps were the bullet,” Dr. Renne said.

Peter Brannen is a science writer at work on a book about the planet’s major extinctions.