Very few women went to Vietnam as journalists, and even fewer as dedicated war photojournalists. In fact, for most of the 1960s, there were only two: Dickie Chapelle, who was killed by a grenade in 1965, and Catherine Leroy.

Leroy was widely considered the most daring photographer in Vietnam. She almost certainly spent the most time in combat — in part because she had no money, having traveled from her native France to Vietnam as a freelancer in 1966 with no contracts and a short list of published work. Living with soldiers meant that she could eat rations and sleep in the countryside.

Leroy faced no shortage of sexism. After she parachuted into combat during Operation Junction City, in early 1967, rumors circulated that she had slept with a colonel in exchange for permission. In fact, she had earned her parachutist license as a teenager, and had already jumped 84 times. Still, she developed a reputation as a photographer quickly, selling photos to The Associated Press and U.P.I.

At one point during the Tet offensive, in early 1968, she was captured by the North Vietnamese Army while with the French journalist Francois Mazure. There was a young lieutenant that they could converse with in French. They explained that they were journalists and would do no harm, so the soldiers decided to let them go. But first she persuaded them to let her take photos, saying that it was important because only one side of the story was being seen. The photos ran as a cover story in Life magazine, which she wrote herself.

Leroy never promoted herself or her work, which is one reason she remains largely unknown among the war photographers of the day (though not forgotten: In 2015 the writer and filmmaker Jacques Menasche completed a documentary about her career, “Cathy at War”; a clip from the film is available here). But she was one of the Vietnam War’s most lauded photojournalists, winning Picture of the Year from the George Polk Awards and, for her later work in Lebanon, the Robert Capa Gold Medal.

Later in life, Leroy ran a vintage clothing website. She died in Santa Monica, Calif., in 2006.

Leroy’s photo series of Vernon Wike became some of her most famous pictures, and in 2004 Paris Match magazine commissioned her to visit him at his home in Prescott, Ariz. Mr. Wike, 58, stood in his living room, his arms heavy with tattoos, including the names of fellow soldiers killed in Vietnam. 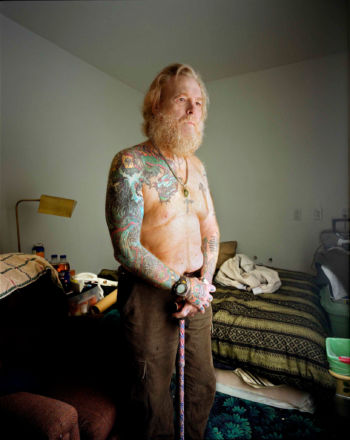 Elizabeth Herman is a freelance photographer and a doctoral student in political science at the University of California, Berkeley.