In April 2014, South Koreans watched in horror as TV news showed live footage of a huge ferry tilting 50 to 60 degrees, sinking into the sea. Aboard were over 300 high school students on a school trip to Jeju Island, the country’s most popular resort. Initial reports said the students were all rescued, but it soon emerged that they were, in fact, still on the ship. The nation watched in real time — for two and a half hours — as the ship sank completely and disappeared from view. It would turn out that rescue efforts had been botched, and the captain and crew had escaped in lifeboats after telling the students and other passengers to stay put. The trapped teenagers sent final video messages to their parents, some of which were broadcast on the news. No statement came from either the Blue House or President Park Geun-hye, whose whereabouts was not clear. Seven hours later, President Park finally appeared, visiting the Central Disaster Safety and Countermeasures Headquarters and asking, “Why is it so hard to find the students if they are wearing life jackets?”

Within two years, Ms. Park’s approval rating was 5 percent, the lowest of any president in modern South Korean history. Over a million Koreans took to the streets, demanding her resignation. I was among them.

On Oct. 29, 2022, another tragedy consumed the nation when 156 people were crushed to death at a Halloween gathering in Itaewon, Seoul’s liveliest neighborhood. The news footage showed bodies strewn around the pavement, with people performing CPR while club music pumped through the air. Most of the victims were in their 20s, the age that the teenagers on the Jeju Island ferry would have been had they survived. 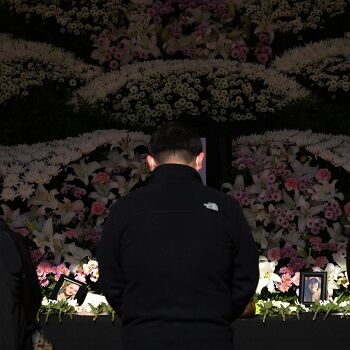 As hundreds of casualties were transported to hospitals and a nearby gymnasium turned morgue, it was once again parents who were summoned, to administer care or to identify the bodies. They told interviewers how their sons had just finished taking an exam and were looking forward to a night out, or how their daughters had just been accepted to their first jobs and were meeting friends to celebrate. Such innocent fun is the privilege of youth, and beholding it is supposed to be a reward for parenthood. Since the ferry disaster, multiple parents and relatives of victims have committed suicide.

If the rituals of public grief are well established, however, the rituals of the holiday that the Itaewon victims were celebrating are fairly new in South Korea — new enough that news anchors had to keep explaining, for the presumably older viewing demographic, what Halloween is. It’s only been a decade or two since the American tradition, as part of the English learning boom, entered the cultural life of Seoul in full force. Along the way something was lost, or perhaps gained, in translation. The holiday was partly co-opted by Korea’s selfie generation for what they call “cospre” — an abbreviation of “costume play”, after the similar tradition of Japanese youths in the Harajuku district — in which they dress up as characters from animations and computer games.

Halloween now exists in the shifting space — cultural and geographic — between the United States and South Korea. Those shifts are nowhere more visible than in the Itaewon neighborhood itself.

Situated in the heart of Seoul at the foot of Namsan, or “South Mountain”, hilly with narrow alleys, Itaewon is an attractive backdrop for fun as well as the setting of a blockbuster K-drama. It’s a neighborhood known for exotic restaurants, counterfeit goods, gay bars and trendy clubs. In the past, I would often wander its winding roads in search of fake designer bags to bring back to the United States as gifts. Later, as the neighborhood gentrified, the seedy ambience gave way to nightlife with an international flair. Yet through most of South Korean history Itaewon was known as a playground for American G.I.s; within walking distance was Yongsan Garrison, a 617-acre compound made to look like an American suburb for over 20,000 military personnel until 2018, when the United States, after seven decades, moved its base out of Seoul.

I visited Yongsan Garrison in its final days and was shocked at the immensity of it, a massive foreign military headquarters in the center of the country’s capital. The place had been off limits to the South Korean public since 1910, when the Imperial Japanese Army built it during the occupation. In May, President Yoon began his term and moved the presidential office from the Blue House to the former defense ministry building adjacent to what used to be the garrison. The huge compound will be turned into a public park, peaceful and welcoming. Yet the Halloween deaths in Itaewon, of so many young Koreans who were following a Japanese twist on an American holiday in the most American part of Seoul, are an uncomfortable reminder of the tension between South Korea and foreign powers.

After the 2014 ferry sinking, President Park was eventually convicted of abuse of power, coercion and other criminal charges. One of the prosecutors was Yoon Suk-yeol, who rose to political stardom as a result and now leads the nation. In response to the Halloween tragedy, he declared a period of national mourning, during which flags were lowered and public altars were set up across the country to pay respect to the dead. Nationwide measures such as those had only been undertaken once before, when 46 navy sailors died in what was likely an attack by North Korea. Already the Yoon government is being accused of both ineptitude and playing politics. Call it belated crowd control or simple pandering, but Mr. Yoon surely has not forgotten the tragedy that led to Ms. Park’s downfall, and neither has the generation of parents left once again with a wound that will never heal.

Suki Kim, a journalist, novelist and essayist, is the author of Without You, There Is No Us: Undercover Among the Sons of North Korea’s Elite.