At its peak in the summer of 2014, the Islamic State was a bureaucratic, corporatized organization overseeing (without legal authority) a “shell-state” spanning 35,000 square miles. That’s roughly the size of Indiana. The Islamic State has since been defeated militarily a number of times, losing nearly all its territory in both Iraq and Syria. And yet it remains the preeminent international terrorist threat, as we saw again on Oct. 31, when a truck drove onto a New York City bike path, killing eight people.

Scholars have noted that the Islamic State has shown an ability to adapt to a variety of circumstances that seem unique among terrorist organizations. But terrorism experts can learn from the flexibility, resilience and group evolution studied in another type of criminal group: street gangs.

Approximately 33,000 gangs have been documented to exist in the United States. Gang scholars have studied street gangs’ remarkable ability to adapt despite law enforcement’s near-constant efforts to suppress them. And they’re often able to flourish in a multitude of directions, given the right ingredients and opportunities.

So how is the Islamic State similar to a criminal street gang?

1. They both have a bureaucratic but spread-out structure

Scholars of terrorism recognize that the Islamic State differs in both form and function from predecessors like al-Qaeda. The Islamic State adopted a bureaucratic structure with checks and balances to govern its so-called caliphate. But even with this vertically integrated hierarchy,  it remained administratively decentralized, spreading authority across councils for military, legal and financial issues and over a broad network of local administrators. Though central leadership claims to directly control every fighter, in practice, local governors ran Islamic State in individual territories.

This diffuse structure provides a great deal of flexibility and operational stamina, insulating the Islamic State from the competitors’ disruptions by allowing mid-level supervisors to be replaced as needed. That’s the pattern scholars find in many drug-selling gangs: not rigid chains of command but loosely affiliated groups/cells that can act independently.

The Islamic State uses a similarly decentralized approach for recruiting and utilizing foreign fighters. Consider the fact that many of the Islamic State’s most notable attacks have been executed by sympathizers who act with no membership credentials and are publicly embraced only after their atrocities. Contrast that with the structure of a more traditional insurgency, in which features a vertical hierarchy and centralized leadership channels.

The Islamic State uses identity and ideology to appeal to disenfranchised Sunni youth. Its active members are predominantly  males in their late teens or early 20s, born outside the territories in which they are fighting. The original leaders drawn from militaries in Iraq, Syria and Georgia have mostly been killed, leaving behind foreign fighters from across the region. Recruits join the Islamic State for many of the same reasons young people join street gangs: social identity, protection, status, excitement and emotional fulfillment.

3. Their violence and criminality are similarly broad in scope

Much as do street gangs, the Islamic State broadcasts its acts of extreme violence to bolster the group’s reputation, display dominance over rivals, intimidate local residents and maintain territorial borders. And in keeping with the practices of profit-oriented criminal gangs, the Islamic State also uses violence to hang onto its revenue-generating resources like oil fields, kidnap-for-ransom and human trafficking.

Here the Islamic State differs from most insurgencies. Some do commit crime to fund their political activities — but they generally pick up one profitable activity and stick with it. For example, the FARC (Revolutionary Armed forces of Columbia) dove into the cocaine trade in Colombia; the Taliban got involved in opium and heroin production in Afghanistan. Tehrik-i-Taliban Pakistan (TTP) used a slightly more diverse set of crimes, such as kidnapping for ransom and motor vehicle theft, in the weakly controlled tribal area in Pakistan.

The Islamic State, on the other hand, picks up just about all kinds of profit-oriented crimes and graphic displays of violence, including extortion, bank robbery, looting, black market sales and cybercrimes. In that, they resemble street gangs, which often shift from conventional and straightforward crimes like robbery, burglary, drug selling, murder, and extortion to more intricate exploits like identity theft, racketeering, and even migrant smuggling and human trafficking.

Scholars, policymakers and law enforcement practitioners have recognized a connection between terrorism motivated by religious or political ideals and crime that’s motivated by profit.

But comparing the Islamic State to street gangs makes clear how much more expansive and successful it is than they are, down to operating its own government and enforcing its laws on civilians in the territories it occupies. We might even decide that the Islamic State may represent the final stage on the gang-terror spectrum

When scholars originally formulated the idea of a crime-terror nexus, shown in the figure above, we showed a spectrum ranging from, at one extreme, organized crime groups aiming directly at maximizing revenue while avoiding scrutiny, and at the other, terrorist groups pursuing purely religious or political objectives, primarily through extreme violence. Between these two lie various points where one type of group adopts the other’s tactics to achieve its goals. Looking at it this way, we gain a useful perspective on decentralized but dynamic modern insurgencies. 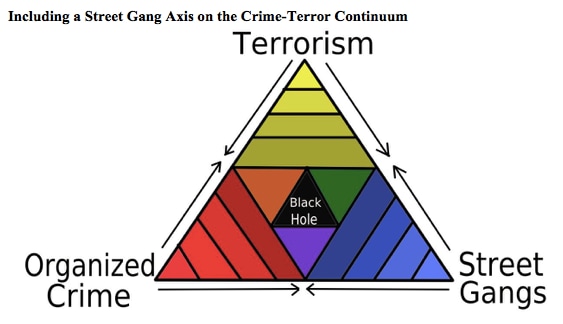 Seeing what criminal street gangs and terrorist groups have in common may also help us consider better how to respond to them. Successful gang intervention programs and terrorism deradicalization efforts already have a great deal in common, such as job training and educational assistance. Those trying to counter the Islamic State’s radicalization and recruitment might wish to borrow more from successful gang intervention programs. From Brussels to Minneapolis, societal conditions like concentrated disadvantage, ethnic segregation, and social marginalization can foster either (or both) gang or terror recruitment. Successful intervention would need to foster both community engagement and healthy social bonding.