Kenyan voters will choose their next president Tuesday in one of Africa’s few competitive elections. Election outcomes in Africa are typically known well in advance because incumbents rarely lose: Sitting presidents and their designated successors have won 80 percent of elections since 1990.

Ugandan President Yoweri Museveni was reelected last year after defeating his closest rival by more than 20 percentage points. In Tanzania, John Magufuli, the candidate of the country’s only ruling party since independence, beat his main opponent by more than 15 percentage points in 2015. Rwanda’s president, Paul Kagame, was just reelected this past weekend with more than 98 percent of the vote.

In Kenya, however, the electoral prospects of President Uhuru Kenyatta are in doubt. Running for his second and last term, the president is in a tight race against Raila Odinga, the candidate he defeated in the 2013 election. Opinion polls indicate that neither is certain to win the more than 50 percent of votes required to avoid a runoff. While some polls show Kenyatta holding on to a narrow lead (47 percent vs. 44 percent), others show that Odinga is pulling into a dead heat, or possibly leading.

There are some fears that Kenyatta’s government might try to rig the election (usually voiced by the opposition), or that mounting political violence will taint the outcome. But most analysts and journalists suggest that the election may ultimately turn on the state of the economy.

A severe drought has affected large parts of Kenya since 2016, limiting food production and placing an estimated 4 million people in need of food aid. With food prices rising, the government has been forced to import and subsidize the price of maize, a staple for most Kenyans.

Yet, whatever the election results turn out to be Tuesday, Kenyan voters won’t be choosing their next president based on economic conditions. We know this after analyzing thousands of responses in a unique panel survey conducted by Twaweza East Africa, a nonpartisan civil society organization that promotes access to education and open government throughout East Africa.

Twaweza’s Sauti za Wananchi (Citizen’s Voices) has been polling a nationally representative sample of Kenyans, collecting information at regular intervals from the same set of individuals, since 2015. In contrast to standard opinion polls that provide a snapshot of voter preferences at a single point in time, Sauti za Wananchi allows us to gauge how voters’ political preferences are responding to changing conditions.

The president enjoys a strong reservoir of support despite a tightening race.

We find that Kenyatta’s support is holding steady despite the slumping economy. In June 2017, 55 percent of respondents said they would vote for Kenyatta, and 36 percent would vote for his opponent. Odinga has closed the gap over the past several months, as previously undecided voters move in his direction, along with supporters of other candidates who have dropped out of the race and endorsed him as leader of their National Super Alliance (NASA). But Kenyatta’s own support has not eroded. 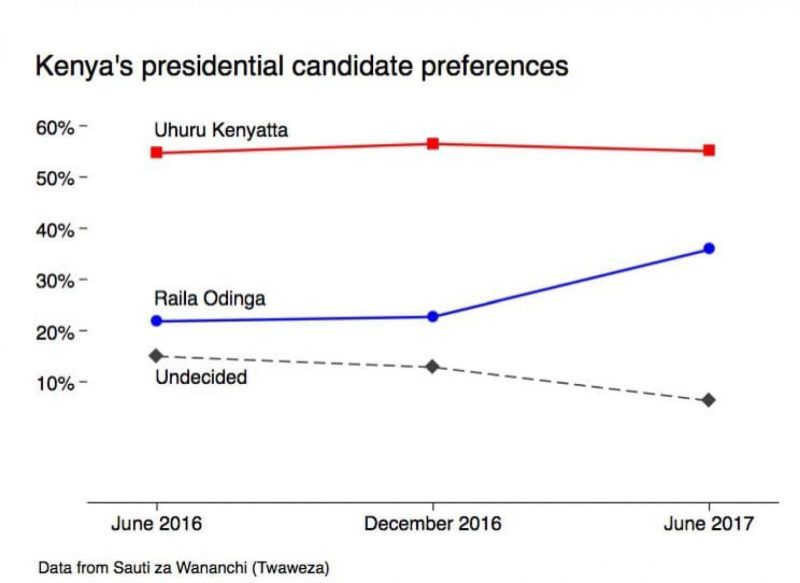 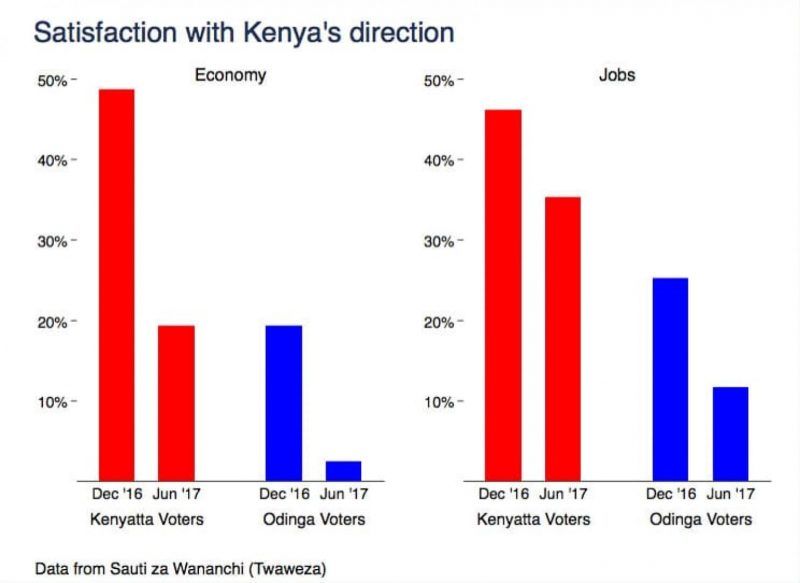 What these patterns suggest is that Kenyan voters’ evaluations of economic performance are not factoring into their presidential choice. We find that voters do not change their vote intention even after changing their opinion about the state of the economy, whether positively or negatively. The same is true when we look at other policy areas such as corruption and security.

We find that Kenyans’ partisan orientations — which political party they feel closest to — is a better predictor of how they will vote. Simply knowing how a respondent felt about Kenyatta’s Jubilee Party or Odinga’s Orange Democratic Movement when asked a year ago tells us more about how they will vote than any of their changing policy evaluations. Indeed, we find relatively little voter movement between candidates across successive rounds of Twaweza’s panel survey. Thirteen percent of Kenyatta’s supporters have shifted to Odinga in the past six months, while 11 percent have gone in the other direction.

An important part of Kenya’s emerging partisan split is ethnically driven. Both candidates have locked up the vote of their respective ethnic groups: 96 percent of Kikuyu voters in our sample are supporting their co-ethnic candidate, Kenyatta; 99 percent of Luo voters are similarly backing Odinga, a fellow Luo.

But presidential candidates can’t win a national election based solely on their ethnic groups. Only 1 in 6 Kenyatta voters in our sample are his co-ethnics; only 1 in 5 Odinga voters are his co-ethnics. This is why Kenyatta and Odinga have recruited politicians from other groups into their electoral coalitions. If Odinga has closed the gap with Kenyatta in recent months, it’s because he has consolidated the votes that were previously going to other opposition candidates who have now endorsed him.

Knowing how Kenyans align themselves politically helps us to understand how they perceive the threat of violence during and after the election. We find that Kenyans completely diverge on the likelihood that elections will turn violent based on which candidate they support. While 37 percent of Kenyatta’s voters think the elections will turn violent (up from 30 percent six months ago), 58 percent of Odinga’s voters are expecting violence (down from 64 percent). 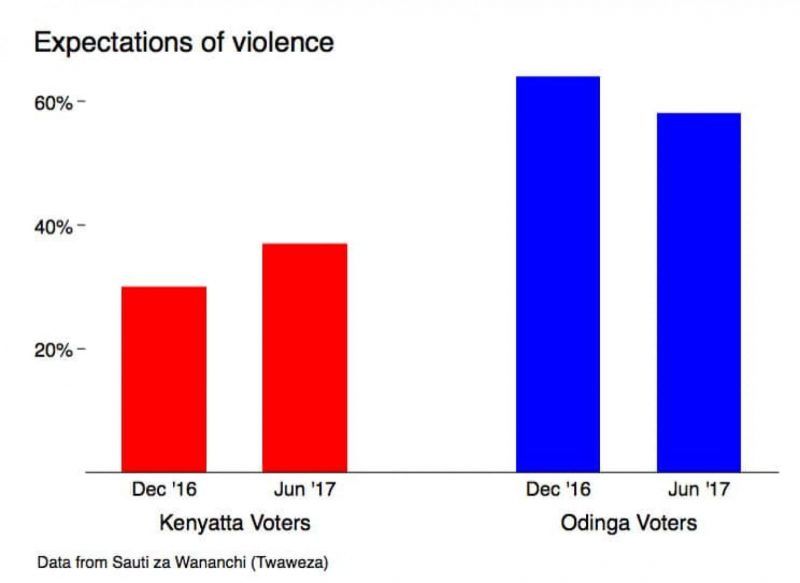 Partisan voters’ beliefs about the likelihood of election violence may be shaped by information they receive from the politicians and parties they trust. Odinga’s supporters are probably more likely to expect violence because his campaign has warned that Kenyatta’s ruling party will either rig the election or use the military to overturn an opposition victory. Whether Kenyan voters accept the final result of Tuesday’s election will probably also depend on what their preferred candidates tell them.