Last week, Catalonia held a controversial referendum on whether it should secede from Spain. The vote was accompanied by a heavy-handed police crackdown that may have prevented some Catalans from voting. Nevertheless, the Catalan regional government declared that more than 90 percent of Catalans had voted for independence — even though the Spanish Constitutional Court had ruled that the referendum was illegal.

These events — and particularly the disputed results of the referendum — give the impression that Catalans are clamoring for independence. But this is wrong.

Before the referendum, a minority of Catalans supported independence

The most recent survey by the Catalan government’s Center for Opinion Studies (CEO), which was conducted in July, showed that only a minority of Catalans (35 percent) supported independence. The graph below plots the trend in support of independence based on CEO surveys going back to 2006. 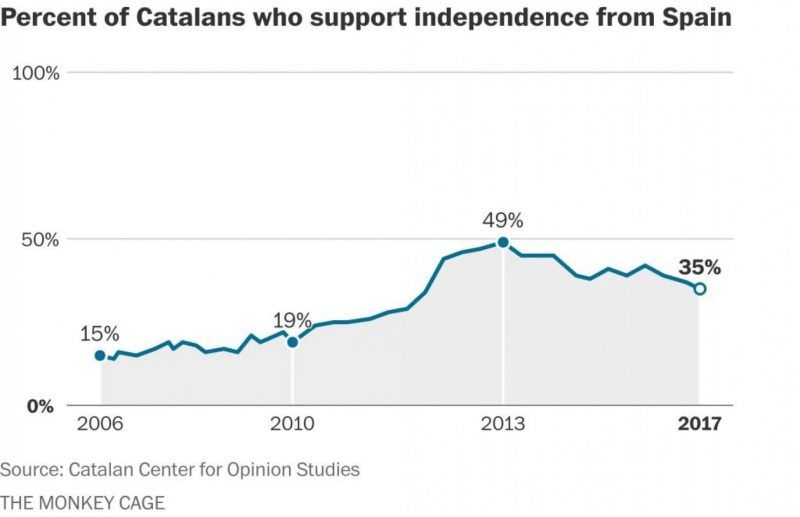 Before 2010, it was rare for more than 20 percent of Catalans to support independence. After 2010, support increased for two reasons. First, the Great Recession struck, leading to widespread unemployment. Second, the Constitutional Court struck down an overhaul of Catalonia’s statute of autonomy — the equivalent of its constitution — at the request of Spain’s conservative People’s Party. In 2013, support for independence peaked at 49 percent. But since then, support for independence has declined, falling below 40 percent last fall.

So why did Catalonia end up holding the referendum?

In the 2015 election for Catalonia’s parliament, several Catalan separatist parties formed an alliance they called “Together for Yes,” promising to implement a unilateral road map to independence regardless of opposition from the Spanish government. They received 40 percent of the vote and managed to form a government with the support of the hard-line Popular Unity Candidacy, which advocates secession at all costs. Altogether, parties supporting Catalan independence received 48 percent of the vote.

Initially, a referendum was not part of the plan. Catalan separatist leaders simply asserted that the election already gave them a mandate for secession. But the plan changed and, in June, the Catalan government announced that it would do something most Catalans supported: hold a referendum.

However, it decided to do so despite opposition from Madrid. This stance is far less popular among ordinary Catalans. In the most recent CEO poll, while 71 percent of Catalans supported a referendum, only 48 percent agreed with holding one that is opposed by the Spanish government.

The Catalan government persisted, nevertheless. It was clear that the referendum would lead to conflict. Even though the People’s Party had become more open to compromise since losing its parliamentary majority in 2016, it continues to oppose letting Catalonia vote on leaving the country.

Why a confrontation with Spain helps the separatists

My research shows that confrontation between separatists and the Spanish national government may help the secessionist cause. In 2016, before this most recent battle over independence, I conducted experiments in Spain that showed how partisan conflict strengthens support for Catalan nationalism.

Two experiments showed how much partisan conflict can polarize opinions. These experiments involved samples of people in Catalonia and Galicia, another Spanish region where nationalism is present. One group of people simply read their preferred party’s position on a nationalist issue. But another group read about the conflicting positions of their preferred party and a party they disliked.

Not only did reading about party conflict tend to polarize opinions, but it made people who preferred a nationalist party more supportive of a nationalist position. This was especially true among those people who identified with both their region and the country as a whole. That is very important, because even in Spanish regions with significant support for independence, most people identify with both Spain and their region. For example, 69 percent of Catalans identify with both Catalonia and Spain.

Even more relevant is a second experiment, conducted in a survey by Making Electoral Democracy Work. All respondents read about the Catalan government’s plan for unilateral independence. Half of the respondents were then told that the People’s Party opposes it.

Catalans who identified with both Catalonia and Spain became more supportive of independence if they read about the People Party’s opposition. Why? Because the People’s Party is extremely unpopular in Catalonia. Eighty-five percent of Catalans say they would never vote for it.

In short, Catalans are not hardcore separatists in many respects. Many do not support secession, and especially a unilateral move toward secession. Many identify with both Catalonia and Spain. These sentiments were visible in the people at Sunday’s rally in support of a unified Spanish state.

But conflict between Catalan nationalist parties and the central government may push even ambivalent Catalans toward independence. Thus, nationalist leaders in Catalonia have a continued incentive to stoke this dispute with the Spanish government.

Eric Guntermann is a postdoctoral researcher at the University of Montreal. His study on party influence on nationalism in Spain was recently accepted at Party Politics.