In the summer of 1789, a young fur trader named Alexander Mackenzie led an expedition in search of a Northwest Passage. He and his voyageurs and Chipewyan guides were attempting, 14 years before Lewis and Clark, to cross North America, paddling birch bark canoes down a river they hoped would pierce the Rocky Mountains. Mackenzie was a businessman who wanted to speed the pace of trade by connecting New York and China via an interior passage through the continent. He did find such a route, without knowing it. Mackenzie died thinking he was a failure, when he was really just 200 years early.

Some ideas are fantastically ahead of their time. In 1636, René Descartes created contact lenses, using glass tubes filled with water; unfortunately, the wearer was unable to blink. Charles Babbage invented digital “difference engines” — essentially modern programmable computers but powered by steam — in the 1820s. And Kodak developed digital cameras in 1974 but discarded the product idea because it thought no one wanted to look at photos on televisions.

In a particularly ill-timed episode, Giovanni Caselli invented the fax machine in 1856. Letter writers could scribble a message onto electrically charged foil, and the portions covered by ink would block the flow of current. The stylus of Caselli’s device then scanned each line of text, transmitting the signal via telegraph lines to a second machine, which would scrawl out a “fac simile” of the letter.

To be practical, the system required a coordinated investment throughout a region, and Napoleon III had plans to modernize all of France with Caselli’s pantelegraph, more than a decade before Alexander Graham Bell’s telephone. But before it could be installed, Napoleon III lost the Franco-Prussian War, his government fell, and Paris descended into the brutal anarchy of the Commune. Caselli faded into obscurity, and his technology was forgotten for a century.

Like the fax machine and computer, Alexander Mackenzie’s Northwest Passage was too forward-looking to be practical or useful. Today the melting Northwest Passage — along the North Slope of Alaska, through the maze of Canadian Arctic islands, then back down along Greenland’s west coast, to the Atlantic — is regularly in the news. A holy grail for generations of explorers is now finally open, because of climate change. Giant cargo and oil tankers regularly ply those seas, and even the Crystal Serenity cruise ship, with 1,700 people onboard (many in black tie), has made the journey the past two summers.

But when Mackenzie led his expedition, this was still unknown. By the mid-1700s, all the various straits north of Hudson’s Bay had been explored, often with disastrous results, and all had been found full of pack ice even in summer. That a Northwest Passage existed at all was considered incontrovertible — “a moral certainty,” according to a British official of the time — and so conventional geographic wisdom held that a route must pass through the continent. Starting at the St. Lawrence River, through the Great Lakes, up one of the mighty prairie rivers, and then, well, they weren’t sure. The maps went blank. Speculative geographers predicted a fabled River of the West, to the Pacific.

Economics had always driven this search. Britain, France and Spain, even as they colonized North America, sought a way around the continent, to reach Chinese tea and spices to supply European markets. Furs, the prime commodity of the time, could take years to procure and ship. A direct passage from North America to China would increase profits significantly.

Mackenzie embodied the enterprising spirit of the age. He emigrated to America as a boy, a refugee from Scotland, landing in New York City in 1775 in the midst of the Revolution. After his father died in the war, the teenage Mackenzie apprenticed as a clerk in a fur trading firm, quickly rising through the ranks of the international cartel known as the North West Company.

He was the youngest partner when chosen to lead the expedition with his Chipewyan partner, Awgeenah, paddling a massive river that led west from the continent’s center. When the river hit the Rocky Mountains it turned north, but Mackenzie was undeterred. Hundreds of miles later, at the shore of the Arctic Ocean, Mackenzie and his crew were stopped by indomitable pack ice in all directions. Even in the heat of summer, there was no way past.

“Though I was disappointed in this,” he wrote later, “it proved without a doubt that there is not a Northwest Passage below this latitude and I believe it will generally be allowed that no passage is practicable in a higher latitude, the sea being eternally covered with ice.” The idea that the climate might eventually change, that someday the ice would melt, was too fantastical to consider.

In 1793, Mackenzie made another attempt, trying a new route over the Rockies, and in so doing made the first recorded crossing of the continent. But the way was treacherous and impossible to use commercially, and no one followed in his footsteps. Mackenzie wrote a book about his travels, and Thomas Jefferson procured one of the very first American copies for his young secretary, Meriwether Lewis. The Corps of Discovery Expedition, commanded by Lewis and William Clark, set out two years later; they took a copy of Mackenzie’s journal with them.

Mackenzie’s spirit never recovered from the disappointments of his travels. His alcohol consumption, even for the day, was legendary. He was forced out of the fur trading company, abandoned his seat in the Canadian legislature and returned to Scotland. In his ambition to find a commercial route to Asia, Mackenzie died a failure.

I traced Mackenzie’s route in the summer of 2016, over 1,100 miles from Canada’s Great Slave Lake to the Arctic Ocean, on the river that now bears his name. The indigenous First Nations who live there know it as the Deh Cho, the Big River, and it lives up to the name: the second longest in North America, in many places so wide you can’t see the other side. For me, it felt as if the river was hiding in plain sight. I wondered, how could a thing so large be so unknown? 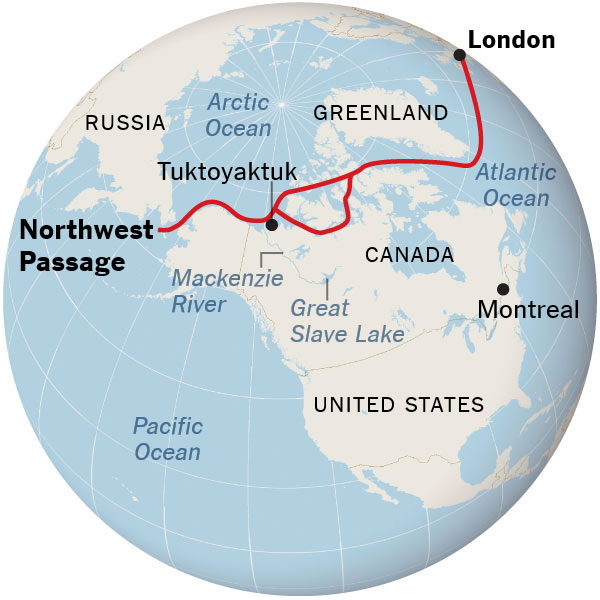 Mackenzie paddled during the Little Ice Age, a few centuries of below-normal cold. If he had undertaken his trip during average conditions, or at our current global temperatures, he would not have been stopped by ice. If the ocean hadn’t been icebound, would the fur trade have followed him down the river to China? Would a summer Deh Cho have been Canada’s own Mississippi River? Would settlers have wagoned in, a northern Oregon Trail?

Today the river is either open for economic development or threatened by it, depending on your perspective. Six trillion cubic feet of gas lie in the river’s delta, and a $20 billion pipeline, planned since construction of the famous Alaska pipeline in the late 1970s, sits on the drawing board waiting for natural gas prices to rebound. An all-weather road was just completed to Tuktoyaktuk, where some politicians want to build a deepwater port for oil tankers bound for China.

In 1961, the novelist Hugh MacLennan traveled the Mackenzie River on a barge. He saw an area ripe for development and predicted that “unless there has been a nuclear war,” by the year 2061 the valley would be home to “at least three million people,” with hospitals and schools and “at least two universities.”

We are more than halfway through MacLennan’s timeline, and today the valley still holds about 10,000 people, the same number as when the novelist took his journey, about the same as when Mackenzie took his.

Ideas do not exist only on their own merits. Timing matters.

Brian Castner is the author of the forthcoming Disappointment River: Finding and Losing the Northwest Passage.