Across the world, 2016 was a disappointing year for women in politics. Hillary Clinton and Keiko Fujimori of Peru lost extremely contentious presidential elections. Brazil’s Dilma Rousseff and South Korea’s Park Geun-hye were forced from power by corruption scandals and massive political protests. In fact, there are now half as many women holding the highest political office in their country (nine) as there were in the spring of 2014 (18). Within only a few years, the number of female leaders has fallen to what it was in 2009. 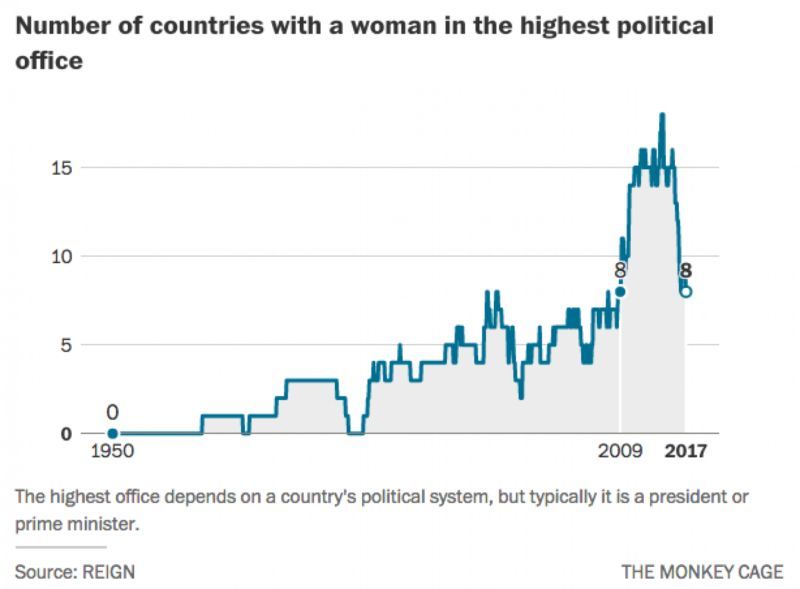 What’s driving this trend? There are numerous causes, but one potential factor is that the successes of anti-establishment political outsiders are coming at the expense of female candidates and women-led political parties. From a global perspective, Clinton’s loss to Donald Trump is not at all unique.

The sudden drop in female leaders

Less than three years ago, the number of women holding the highest political office in their country rose to an all-time high. Seven women took power in 2010, and five more followed in 2011. The majority of these women were elected as their country’s first president or prime minister. These wins occurred in countries as diverse as Brazil, Thailand, Jamaica, Costa Rica and Slovakia.

But since January 2014, only eight new female leaders have emerged, and just one of them, Chilean President Michelle Bachelet (who had served as president from 2006 to 2010), won at the polls. The other seven were short-term party or legislative appointees who were not directly chosen by voters. Of these women, only Britain’s Theresa May and Micronesia’s Hilda Heine remain in power.

To better understand this trend, we collected data on every candidate or party that secured at least 5 percent of the popular vote in a recent multiparty election for a country’s highest office (president, prime minister, chancellor, etc.). Our data included more than 350 parties and candidates across 105 presidential and parliamentary elections since January 2014.

The problem isn’t that women or women-led parties aren’t running in elections. Women ran in more than a quarter of the contests since January 2014 (28 of 105) but won only five of them.

Four of the five victories were by women who already held power, and the fifth winner, Myanmar’s Aung San Suu Kyi, was legally banned from taking power and instead rules indirectly through a male aide. Worldwide, voters haven’t directly elected a new woman to become president or prime minister since Norwegian Prime Minister Erna Solberg’s victory in September 2013.

A few female candidates have come very close to winning their races. Clinton won the popular vote in the 2016 U.S. presidential election but did not win the electoral college. In Peru, Fujimori lost the 2016 presidential election by just 0.2 percent of the runoff vote. In February, Jamaican Prime Minister Portia Simpson-Miller lost her reelection campaign by fewer than 3,500 votes.

Yet even if these close races had gone the other way, there still would be a sizable drop in the number of countries with a woman in the highest political office.

Some women lost for unsurprising reasons

Female candidates or women-led parties suffered 7 of their 23 defeats for the same reason that male candidates often lose: They ran against incumbents running strong campaigns. Sitting presidents and prime ministers defeated female opponents in Colombia, Fiji, Ireland, Serbia, Portugal, Greece and New Zealand, winning by an average of 17 points over their nearest competitor.

Two other female candidates were never serious contenders because they ran from uncompetitive or fringe political parties. Sweden’s Centre Party, led by Annie Loof, has failed to collect more than 10 percent of the vote in seven straight elections dating to 1988. Elena Udrea, who earned just over 5 percent of the vote in the 2014 Romanian presidential elections, ran as a protest candidate from a new political faction.

In eight of these races, however, female candidates lost to male populists with less experience in government. Clinton’s loss to Trump is only one.

In India, outsider and economic nationalist Narendra Modi resoundingly defeated Sonia Gandhi’s Indian National Congress. Gandhi is a Clinton-like insider who has been president of India’s largest political party since 1998.

In Guatemala, Sandra Torres, a former first lady and prominent political activist, lost her October 2015 bid to become Guatemala’s first female president to Jimmy Morales, a comedian with no political experience who was once labeled the “Donald Trump of Guatemala.”

In the Philippines, Rodrigo Duterte, a populist mayor, defeated four other candidates, two of whom were female senators.

In Western Europe, which has historically placed more women in elected office, female candidates have suffered during the region’s well-documented populist turn. Danish Prime Minister Helle Thorning-Schmidt won the plurality of the vote in Denmark’s 2015 general elections, but her party’s alliance with other left-leaning parties was narrowly defeated by a conservative block spearheaded by the populist Danish People’s Party, which saw its vote share nearly double between the 2011 and 2015 elections. Female candidates also underperformed nationalist parties in Switzerland, Belgium and elsewhere.

The rise of populist outsiders may disadvantage female candidates because these movements simultaneously advance more conservative positions on women’s rights while also undercutting the importance of traditional political experience. This is important because inexperienced women are far less likely to run for office than inexperienced men. As evidenced by Clinton, Torres and others, women more typically run for office only after building impressive technocratic resumes that feature years of work within the political establishment. By weakening the value that voters place on traditional political experience, populist candidates are undermining the greatest strengths of many female candidates.

A few women have ridden the populist wave

Even in this ultimate “year of the outsider,” the news is not universally bad for women in politics. The rise of populism has overcome male establishment candidates such as Italy’s Prime Minister Matteo Renzi, who resigned after a referendum he promoted lost, and men have many more presidencies and prime minister posts to defend. May is no political outsider, but she would not have become the United Kingdom’s second female prime minister had the successful Brexit movement not compelled her male predecessor to resign.

To be sure, the trend toward anti-establishment outsiders has thwarted more women than it has elevated, but women enjoying this wave include Birgitta Jonsdottir, leader of Iceland’s anti-establishment Pirate Party, and Peru’s Fujimori. They did not win their elections, but they outperformed most of the other women who ran for office around the world over the past three years. France’s Marine Le Pen and Germany’s Frauke Petry will be among the more prominent female candidates to test this populist strategy in elections taking place in 2017.

What are the implications for the future?

Some of the trends thwarting female candidates are unlikely to change anytime soon. Popular incumbents will continue to be difficult to unseat in reelection campaigns, and more than 95 percent of the world’s incumbent leaders are men. But the relative successes of female populists such as Fujimori and Jonsdottir show that women can also tap into this global anti-establishment wave. If the decline in female leaders is to be reversed soon, it may require more political appointments, such as Theresa May, and more women running from outside the traditional political establishment.