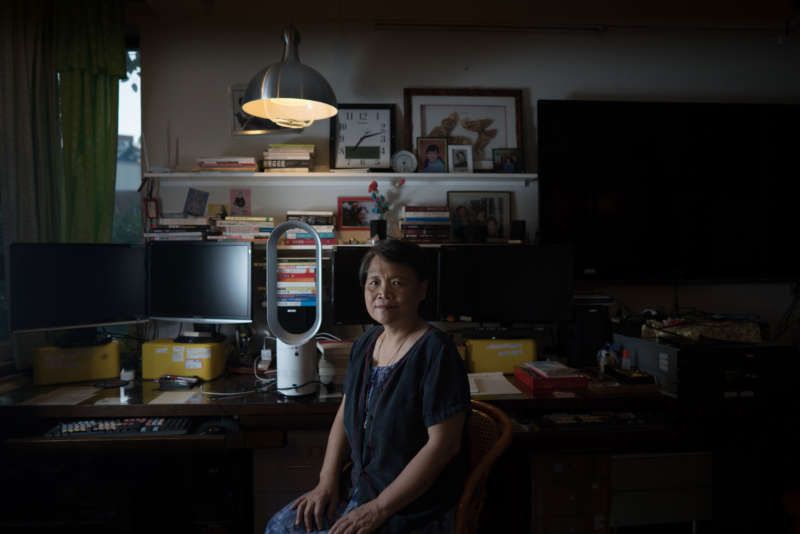 Ai Xiaoming is one of China’s leading documentary filmmakers and political activists. Since 2004, she has made more than two dozen films, many of them long, gritty documentaries that detail citizen activism or uncover whitewashed historical events. Among them are Taishi Village, which recounts the efforts of farmers to remove a corrupt party secretary; The Epic of the Central Plains, which tells the story of an AIDS village in Henan province; a five-part series on the 2008 Beichuan Earthquake that focuses on the efforts of activist Tan Zuoren; and, most recently, a five-part documentary on Jiabiangou—a labor camp for political prisoners where thousands died of famine in the Great Leap Forward. Still in progress, it already totals seven hours.

The sixty-two-year-old grew up in the central Chinese city of Wuhan, daughter of Ai Renkuan, the adopted son of the Tang Shengzhi. In 1985 she moved to the capital to teach at Beijing Normal University, where she befriended many leading thinkers in China’s post-Cultural Revolution intellectual scene. In 1994, she became a professor of Chinese literature at Sun Yat-sen University in the southern city of Guangzhou, where she taught women’s studies and literature before retiring two years ago. She is the author of eight books on literature, and has translated works by Kundera.

I recently traveled to Wuhan to meet Ms. Ai. Over a long afternoon tea and then dinner, Ms. Ai talked about the ongoing crackdown on dissent, The Vagina Monologues, and why China doesn’t have any real public intellectuals.

Ian Johnson: Your films are banned in China. Is it demoralizing that so few people can see them?

Ai Xiaoming: They are collected and shown at festivals. In the Chinese-speaking world, you can see them. Domestically, a lot of friends have seen them.

Of course. I believe it has great significance. You interviewed Hu Jie and he said the same—perhaps our thoughts are the same. A documentary is important for a society’s memory. Maybe I can’t find the right reason because for me there’s no need to discuss it. It’s just an important matter.

If you can’t change society, then is your aim to record what has happened?

It’s like the Tan Zuoren or Pu Zhiqiang trials [in which a leading activist and lawyer were sentenced to jail in what widely are seen as trumped-up charges]. There is no source of information about these cases for hundreds of millions of people. I think recording this history is more important than participating in film festivals or considering foreign audiences, because a lot of historical evidence is being eliminated. It has to be preserved.

Is this why your films are so long?

Perhaps for you they’re long, but the needs of an audience living under censorship are different than in an open society. The films will be an important source of memory for future civil society. A lawyer like Mr. Chen [Chen Guangcheng, the blind activist lawyer who fled China] might become someone like Mandela. I don’t have any expectations or higher hopes except that scholars might use them as visual materials or that it’s a contribution to oral history. If people want to see it, they can and if not then I won’t criticize them. But I think there are people who watch my films.

In the past you wrote many books. But now you focus on films. Why?

The first reason is I like to make films. Also I think a lot of people can write and can write better than me. But not many women make films. And women who make films about social problems are even fewer. There’s another reason, which is in this Weixin [the social media app also known as WeChat] era, so many issues come up that we should pay attention to—such as detaining people. For example, going to a brothel and it gets you killed. Or just as they please detaining an artist. Who can read literature in this era? Some people might go read a novel but I at least don’t have time. I want to know when they’re coming to search my home—you have to be prepared! [laughs] They just come and cart off people. And then that person just dies. A lot of our friends are in jail now.

It must be incredibly hard to film nowadays. You are under constant surveillance.

Yes, definitely. Last year so many were detained. It’s harder.

Why do you work alone?

How could I not work alone? I don’t have any money! Where should I get the money?

Never. It’s all self-financed. It’s the only way to work in China. Otherwise you will be accused of taking foreign money.

I’m curious about how you became politically active. During the 1989 protests you were not involved with the student movement.

People like me who went through the Cultural Revolution, we are often skeptical of politics. I was a teacher and I watched the students but didn’t participate directly. I went to Tiananmen Square twice but mainly watched this from a distance.

In 1999 I spent a year abroad at the University of the South in Tennessee. It had a huge impact on me. I saw how people discussed social problems. I remember participating in commemorations for Martin Luther King, Jr. on his holiday. I thought: this is how a university ought to be; I want to bring this back to China.

Did your interest in women’s issues also turn you toward activism?

Yes. It’s like this: women’s issues are hard to keep as a purely academic pursuit.  Because if you’re talking about equality, then a student comes up to you and says, “I just encountered this unfair event,” then suddenly it’s related to real life. For example rape or sexual violence: you try to report it but the authorities won’t file it for investigation. Or sexual harassment by teachers. Or how to treat gay people. A lot of these are very real issues, not just things you read in a book.

An example might be the Feminist Five [five young women detained in 2015 for public protests against sexism]. I was surprised that the government reacted so harshly. They weren’t challenging the state

The government doesn’t want people on the street. For those in power, observing is one thing but going to the public space is another. For them, this is a huge threat because if you take to the street, others can.

While teaching about feminism, you got interested in film. How did that happen?

I saw the documentary made by Hu Jie on Lin Zhao and brought him to our university to show the film and talk to the students. Then later I was teaching a course on women’s studies and the students performed The Vagina Monologues. These students were about to graduate. So I invited Hu Jie to record it. We did it together and I learned a lot from him. Afterwards I decided to keep going. Because I felt that The Vagina Monologues contained a lot of foreigners’ concerns. It was quite distant from my experiences. I wanted to use our stories, Chinese people’s stories, women’s stories.

This was around the time of the Sun Zhigang incident in 2003 [when a migrant worker was killed in police custody, causing a national uproar and a change in police practices]. This was the start of a brief period of Internet activism in China. Did this play a part for you? Did you hope to change Chinese society?

Especially after Sun Zhigang a lot of people tried to find ways to promote reforms, to have political reform, peacefully, through dialogue, through advocacy actions. The Sun Zhigang case awoke a lot of expectations—that slow, step-by-step qualitative change was possible.

When I started I also thought I wanted to change society. I had a strong urge to change society, but now that I think back on it, that was childish. It was infantile. It was naïve. I didn’t realize how totalitarian society was, such barbarism.

When did you lose that initial idealism?

At the start, the Hu-Wen administration [of Hu Jintao and Wen Jiabao, which came to power in 2002] brought some illusions of hope, but especially after 2008 this weiwen [stability maintenance] system gradually took shape. It concentrates power in the government’s hand…

Another thing is that in the past perhaps I believed in the goodness of human nature. I believe this is naïve. Actually, human nature in this totalitarian society has become very vile. This power has changed Chinese people’s psychological makeup. Most people, very many people, are really terrible; they’re afraid of losing things. I don’t mean ordinary people. In fact, ordinary people are often quite clear about the system. I mean, a lot of people in universities, a lot of intellectuals, they know. But the pressure is so great. A lot of people don’t want to sacrifice because being inside the system has a lot of advantages. Why would they want to give up such a comfortable life?

Where will change come from?

Are there still public intellectuals in China?

The reputation of public intellectuals stinks.

I was about to call you one!

Has China ever had public intellectuals? I don’t think so. In the feudal era there was an educated class but it was to serve power. Then came the May 4th Movement [of 1919 that promoted science and democracy, and was part of a flowering of early twentieth-century intellectual life]. But few paid attention to the independence of intellectuals. And then China’s political environment deteriorated even further. The Communists established a government, and in the 1950s Mao declared intellectuals to be the stinking ninth class or as living as si ti bu qin, wu gu bu fen [unable to move your four limbs or distinguish the five crops—to live as a parasite]. So how can you talk of having public intellectuals? There were no intellectuals.

What about after the reform era?

This word intellectual is fashionable but what does it mean? They use it to describe anyone who’s literate. If you’re in a small county seat and you’ve got an elementary school degree, you’re an intellectual. And where are they? What have they done?

Well, there are people like yourself who speak up.

I think I’m an artist, but it’s hard to say if I’m an intellectual. I’m at the front. I’m on the Web. I pay attention to intellectuals’ discussions. But I don’t do research. I document.

And what do you see?

Intellectuals face a choice. One option is to break with this [ruling] power. We have to make a clear break. This is the only way to have a position of making a thorough judgment. The other choice is to superficially work with it. But what does this accomplish? The government has already detained so many people, and sent so many NGO leaders, weiquan rights-defenders, and lawyers to prison. In this situation, if you still believe the government’s words—that you can preserve some sort of positive interaction—then you are either lying or stupid. But I don’t think it’s a question of stupidity. It’s a lie.

Ian Johnson reports from Beijing and Berlin. His next book, The Souls of China: The Return of Religion After Mao, will be published in April.  (September 2016)