China’s “One Belt, One Road” initiative, an economic expansion plan that follows the trade routes of the medieval Tang and Yuan dynasties across Eurasia, is overly ambitious because, like all grand strategies, it is aspirational. Yet the future of Eurasia is written into its design.

This new Silk Road serves several goals of China’s leaders, who are intent on making their country a full-fledged superpower. It is a branding operation for many of the roads, bridges, pipelines and railroads that China has already built, linking it with the former-Soviet-controlled countries of energy-rich Central Asia. In the process, One Belt, One Road seeks to develop — and at the same time surround — the Muslim region of China that abuts Central Asia.

Further westward, China intends to create an organic alliance with Iran, a state that because of its immense size, location and population, as well as its long imperial tradition, functions as the fulcrum for the Middle East and Central Asia. 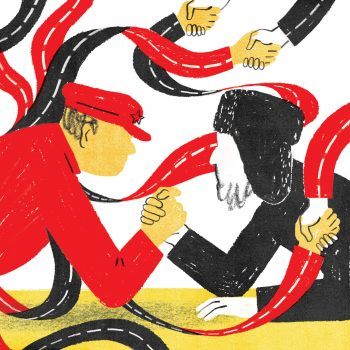 The larger Chinese goal is to dominate Eurasia, which means relegating Russia to a second-tier power.

China and Russia share a land border of more than 2,600 miles, an interminable stretch of birch forest separating mainly the Russian Far East from Chinese Manchuria, whose particulars were formally agreed upon only in the last decade. In 1969, the dispatch of about 30 Soviet divisions to this border, and China’s deployment of 59 divisions in response, deepened the Chinese-Soviet split and allowed for President Richard Nixon’s opening to China and his détente with the Soviet Union.
Continue reading the main story

In few areas is the Russian state so feeble as in its far east. The ethnic Russian population is only an estimated 6 million. Chinese migrants are moving steadily north into this vastly underpopulated Siberian back-of-beyond, rich in the natural gas, oil, timber, diamonds and gold that China covets. China lost part of this region to Russia only in the 19th century, when the Qing dynasty was in its death throes, and the rest in the 20th century.

At the same time, China is vanquishing Russia in Central Asia. In the last decade, the China National Petroleum Corporation has become Central Asia’s main energy player. China pumps Kazakh oil to Europe and also to China through a pipeline, and the Chinese transport natural gas from Turkmenistan to western China. Chinese money has also been coursing through Central Asia to build power grids and transportation infrastructure, altering the landscape and forming the backbone of the One Belt, One Road plan.

The prize is Iran. Lying at the other end of Central Asia from China, Iran has 80 million people and straddles the oil and gas fields of the Caspian Sea and the Persian Gulf, providing Beijing with the incentive to build rail lines through the Iranian plateau, make energy deals with Tehran, use Chinese state companies to excavate Iranian mines, and send armies of entrepreneurs there. Russia’s Eurasian Economic Union, including Belarus, Armenia, Kazakhstan and Kyrgyzstan, was formed in 2014 to counter China’s growing influence in Eurasia.

Russia is not only losing out to China in its far east and Central Asia, but in Europe, too. While Moscow has been undermining the independence of the former Soviet republics in the Baltic and Black Sea basins through subversion and military incursions, Beijing has been strengthening trade ties throughout Europe. The Trump administration’s aversion to free trade — combined with its apparent ambivalence about defending European allies — has provided China with an opportunity in Europe, further enhancing Beijing’s plans for the western terminus of One Belt, One Road. China’s gains will weaken not only American influence in Europe, but Russian influence, too.

For example, Greece, because of its tensions with the European Union and its Orthodox religion, should be drifting closer to Russia. But it is slipping into China’s economic grasp, as the port of Piraeus becomes another western endpoint of the new Silk Road. China is also competing for nuclear power plants and other energy infrastructure in Bulgaria, Romania, Poland and the Czech Republic. President Vladimir Putin’s compulsion to challenge the West — while China under President Xi Jinping is quietly on the march all around him — demonstrates his strategic shortsightedness at a time of Russian economic vulnerability.

But trade is lopsided in China’s favor; the fall in energy prices has made China considerably less dependent on Russia. Russia sells arms to China’s adversaries, India and Vietnam. And China has copied Russian weapons designs.

These deeper geopolitical realities mean China and Russia will be only allies of convenience. And because the Beijing-Moscow rivalry is long-term, understated and focused on remote terrain, thus lacking in appeal for the news media, it is easy to ignore.

China’s geopolitical ambitions, like Russia’s, arise out of internal insecurity. The Chinese state is weakest in the west — that is, in historic East Turkestan — home to the Muslim Turkic Uighur minority, which the dominant ethnic group, the Han Chinese, view with trepidation.

Islam represents an alternative identity for the Uighurs, one independent of the Chinese state. Unlike the Tibetans with their Dalai Lama, the Uighurs don’t have an elite leadership with which to communicate with Beijing. Rather, they embody an anarchic force that could be provoked into upheaval by an environmental disaster or other emergency. China’s One Belt, One Road initiative, by joining the rest of Turkic Central Asia economically and politically closer to China, is meant in part to deny the Uighurs a rear base in an uprising.

China can be stopped only by its own internal demons. As Samuel P. Huntington wrote in his classic 1968 study, “Political Order in Changing Societies,” the more complex a society gets, the more responsive its institutions must become, otherwise the creation of a large middle class is destabilizing.

China’s autocracy, precisely because of its successes, could face a crisis of legitimacy as social, ethnic and religious tensions intensify in both Han and Uighur areas, especially in the event of any further slowdowns in economic growth that thwart the rising expectations of its people. That’s why the ultimate success of One Belt, One Road will be determined less by what happens in Central Asia and elsewhere than by what happens inside China itself.

The United States, which has longtime allies to defend against Chinese bullying in East Asia and against Russian bullying in Central and Eastern Europe, is helped by the quiet geopolitical rivalry between Beijing and Moscow. Because the contest between China and Russia is largely determined by their geographical proximity and therefore must persist, America will have the greater possibility to maneuver, hardening or softening its position toward each power as the situation demands.

The United States must only prevent China from dominating the Eastern Hemisphere to the same extent that it has dominated the Western Hemisphere. But it must do this without selling out Central Europe and parts of the Middle East to Russia.

The solution to this conundrum for the United States lies outside geopolitics. It is precisely because Washington has no territorial ambitions in Eurasia that Americans are not viewed with suspicion by local populations there the way the Chinese and Russians are. By relentlessly promoting free trade, human rights and civil society America will gain credibility with societies undergoing rapid social transformation across the region.

This is how the United States gains entry into Eurasia without crudely trying to balance one power off against the other at a moment when the Chinese-Russian rivalry is far more subtle than it was in Nixon’s time. The very economic development that China promotes will make societies along the path of the new Silk Road — particularly in the sterile dictatorships of Iran and Central Asia — harder to manage, and thus to rule.

It is precisely the universal values that President Trump disdains that can now pay geopolitical dividends. A populist-nationalist agenda that confines American interests to North America will only marginalize the United States on the other side of the world.

Robert D. Kaplan, a senior fellow at the Center for a New American Security and a senior adviser at Eurasia Group, is the author of the forthcoming The Return of Marco Polo’s World: War, Strategy, and American Interests in the Twenty-first Century.