National elections are seven weeks away and Moldova is frankly at a crossroads. One path will take us backward, back into the bosom of a failing, corrupt Russia run by Vladimir Putin and his henchmen. Socialism has failed, politically, economically and socially; we cannot go back. The other path surges us forward — with Democratic government, transparency, free markets, jobs, economic growth and a seat at the global table that will benefit all Moldovans. 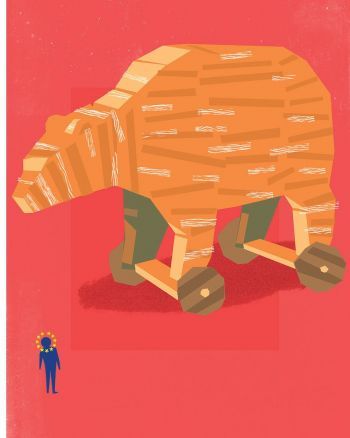 As I flew back from Washington earlier this month, I was encouraged by the ever-stronger ties between Moldova and the United States. It was my third trip this year, and I am tremendously proud of the progress in our partnership. We have improved diplomatic ties, won the support from the U.S. Congress, and are increasing economic engagement between our countries. There is now a recognition in Washington that Moldova is embracing Western values and is striding ahead as a partner and ally.

Moldova recently appointed our first female ambassador to Washington, Cristina Balan. Her efforts coupled with the strong start in Chisinau, by the new U.S. ambassador, Dereck Hogan, has tethered our two countries closer together. Jointly, we must stare down the very real threat posed by an aggressive, belligerent Russia.

We must stand shoulder-to-shoulder against the insidious and ongoing effort by Moscow to manipulate and undermine our elections — a pressing issue Washington is dealing with on a daily basis at home. The Russian occupation of 11 percent of sovereign Moldovan territory and Moscow’s military buildup writ large are clear and present dangers to global security, to which we must present a unified front.

Commercial ties continue to grow, with the launch the American-Moldovan Business Council (AMBC) in Washington. The AMBC will increase trade and economic growth between our two countries. As Moldova’s future prosperity lies with the free markets of the West, this is an important initiative for the Moldovan people.

America is an important trading partner. Moldovan wine is already highly sought after and other products will soon find new markets. Additionally, working with reliable American partners, Moldova is in the process of generating our own energy, which will allow us to reduce our reliance on Moscow.

But perhaps the strongest sign of our strengthened alliance is the support Moldova is now receiving from the U.S. Congress, the direct representatives of the American people.

Earlier this year, the House of Representatives introduced a resolution to enhance relations with Moldova and to stand up for our security and independence from external threats. The House resolution acknowledges the democratic reforms the PDM party has already implemented. Congress also offered support for further work toward Moldova enhancing and developing the transparent, democratic system of government supported by the Kremlin. Moldovans are hungry for a country free of socialist economic constraints.

The U.S. Senate introduced a resolution in September, during my second visit to Washington, lauding the massive reforms that have already been enacted. The Senate chamber encouraged Moldova’s continued modernization, welcoming our comprehensive democratic and financial reforms, and thanked the Moldovan people for embracing human rights and supporting global security initiatives and societal norms.

Further, important members of the United States Congress have visited our capital for high level discussions on pressing security and trade initiatives. Congressman Will Hurd, a Republican from Texas and former U.S. intelligence operative, met with PDM chairman Vlad Plahotniuc in April, where the congressman praised Moldova for standing up in the face of blatant Russian aggression which threatens not only Moldova, but the stability of the entire region.

We urge our American and European allies to redouble their engagement with Moldova to ensure partnerships based on mutual respect, prosperity and security. The PDM will work tirelessly to continue to strengthen our ties with Washington to ensure Moldova remains a democratic, transparent and free society.

Andrian Candu is speaker of the Parliament of the Republic of Moldova.