Each time I visit Mumbai, I make a pilgrimage to an old five-story building with crumbling balconies on Nepean Sea Road. It’s where I lived during the ’60s and ’70s — the first two decades of my life. I went back a few weeks ago. Standing outside, I thought about the diverse, cosmopolitan city I knew, and how it has changed.

We lived in a single room. Our flat was shared by four families: We were Hindu, the other three Muslim. Our landlord, who lived in the room next to ours, had a kitchen in common with us; down the hall were two communal toilets. Muslim families lived on the two floors above us, but the top floor family was Hindu, as were the shopkeepers below.

Our differing religions almost never caused friction. Once in a while, my mother might complain about the smell of beef being cooked by the landlady. We’d occasionally grill tiny pork sausages over the toaster in our room, in secret retaliation. Usually, though, religion came up only in the context of festivals: The neighbors gave us fresh meat each time they slaughtered a lamb for Eid; we invited their children to light firecrackers with us to celebrate Diwali. 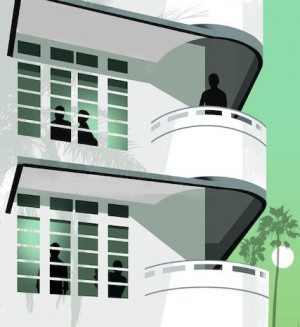 Which is not to say we lived in blissful harmony. There were frequent (often spectacular) altercations — over kitchen counter space, the limited water supply in the flat’s storage tanks, a common electricity bill, a shared doorbell. Surprises left unflushed in the toilets elicited particular rancor. Ashamed, I never invited classmates over.

The compensation was our South Bombay address. We were in the most cosmopolitan part of the city — the area with the best shops, movie theaters and restaurants. Art Deco buildings lined Marine Drive. Every evening, we’d walk to the neighborhood called Breach Candy, right next to the American Consulate housed in a former maharaja’s mansion, and enjoy the breeze blowing in from the Arabian Sea.

Although money was always tight, my parents could have probably scraped together enough to buy a small flat in the suburbs. But these seemed impossibly remote and provincial back then: Visiting our relatives in the suburbs required long commutes on crowded trains, and I always returned covered with mosquito bites.

Now, when even distant suburbs boast malls and multiplexes, our disdain seems quaint. In 1971, the population of South Bombay and the suburbs stood at about three million each. By 2011, the suburbs had tripled (and the metro area beyond increased even more), while the population of the South remained stable. Even the United States government has sold off the maharaja’s mansion and moved its consulate north to Bandra-Kurla, hailed as the new hub of the city, now known as Mumbai.

Old problems remain. Over half of the population lives in slums. The suburban rail system has become even more dehumanizing: About 800 passengers die annually in falls from overcrowded compartments. Major investment in road projects, skewed heavily toward the interests of the affluent, has resulted in booming car ownership and multiple choke points. Soulless new high-rises erupt randomly from the landscape, with little heed paid to infrastructure or aesthetics.

More alarming to me, though, is how the inter-communal mix of my formative years has been lost. As the writer Naresh Fernandes describes in his book, “City Adrift: A Short Biography of Bombay,” some suburban areas are acquiring the feel of religious ghettos. Mumbra, one of the largest, is over 90 percent Muslim. It suffers daily power failures much worse than those in neighboring Hindu localities. To the west, the clearly demarcated Muslim parts of Jogeshwari are snidely called “mini Pakistan” by Hindus across the “border.”

It is not difficult to find Internet listings specifying whether a property lies in the Hindu or Muslim area of an outer suburb, or even, in the case of a half-million dollar flat in the closer-in suburb Andheri, saying explicitly, “All communities allowed EXCEPT Muslims.”

Such intolerance exists at all price points. In a TV interview, Shabana Azmi, one of India’s most celebrated actresses and a former member of Parliament, described how she and her equally famous screenwriter husband couldn’t buy the flat they wanted because they were Muslim.

On my own street, beyond the long-razed grand mansions I used to bicycle by, wealthy Jains have turned their modern apartment blocks into militantly meat-free zones, around which few markets dare carry non-vegetarian offerings.

The world I knew is gone. So it seemed symbolic that on my latest visit, I found my building looking like a mausoleum: windows plastered up, ornamentation stripped clean, top three floors entombed, as if in concrete.

A developer has been buying off the residential tenants — presumably, renovations have begun.

I wondered what exorbitant price our refurbished flat would command. Certainly, the socioeconomic range the building once fostered can never be restored. The grocers who lived in cramped quarters attached to their downstairs shops have long given way to gratuitous fashion and electronic boutiques. The men and women who slept on our staircase landings at night are now barred by a metal grate. I suppose you would call those people homeless today. Back then, they were poor, but they were our neighbors.

Will the entire area become a sprawling gated community one day, designed to filter out the city’s diversity?

In 1958, my father, newly arrived in the city, sublet the room for 150 rupees a month (about $31 then). He did not know that he would live there until his death in 2002, and my mother until 2005. He came from Rawalpindi, in what was once India and is now Pakistan. Even though he’d lost his family home to Muslims in the country’s bloody partition only 11 years earlier, when he arrived in Bombay it seemed perfectly reasonable to live in their midst. That’s what increasingly amazes me about the bygone city I grew up in.

Manil Suri, the author of the novel The City of Devi, is a mathematics professor at the University of Maryland, Baltimore County, and a contributing opinion writer.