Everyone loves to win. But in Russia, obsessing about victories past or present, military or artistic, is a national pastime.

At least, that’s the impression you get if you listen to Russia’s politicians and its state-run news media. That Russia’s leadership in arts, sports and fighting terrorism is not sufficiently recognized by the rest of the world is a daily staple, a very public kind of acute status anxiety.

Celebrating triumphs is preferable, of course. Russians do not like losing. In fact, their leaders make a show of being very sore losers indeed.

Take the Eurovision song contest. Despite being extremely kitsch, the event is taken seriously in Central and Eastern Europe — for reasons that often have little to do with music.

In the finale of the most recent contest, a Ukrainian singer took first prize. The result, which was decided by televoting, seemed as politicized as the winning song: a tragic ballad about the fate of the Crimean Tatars deported under Stalin. Given Russia’s recent annexation of Crimea, it is not a stretch to assume that European audiences were sending Russia a message, rather than choosing a winner purely on artistic merit. 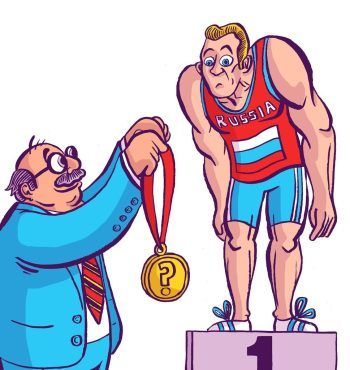 When the Russian singer, who had been favored to win, came in third, Russian politicians cried foul. One member of Parliament, Yelena Drapeko, blamed “an information war” against Russia for the result. Some angry citizens proposed that Russia boycott the next competition, which is to be held in Ukraine.

When the Russian singer, who had been favored to win, came in third, Russian politicians cried foul. One member of Parliament, Yelena Drapeko, blamed “an information war” against Russia for the result. Some angry citizens proposed that Russia boycott the next competition, which is to be held in Ukraine.

“Russia’s enemies want a weak, sick state,” said President Vladimir V. Putin at a rally in 2007. “They need a disorganized and disoriented society.” He has blamed the West for seeking to undermine Russia ever since the collapse of the Soviet Union. This paranoid theme has become a recurrent strand in Mr. Putin’s presidential rhetoric. Even victory in World War I “was stolen from the country by those who sowed dissension within Russia,” he said in 2014, at a commemorative event. (He was referring to the Bolsheviks, but his argument was the same — “national betrayal” by Russia’s enemies.)

The problem is that when winning is everything, the ends justify the means. So now, when Russia wins, the rest of the world is suspicious. A doping scandal that originally involved Russian track and field athletes now threatens to tarnish Russia’s much-vaunted victories in the 2014 Winter Olympics, held in the southern city of Sochi. More than a dozen Russian Olympians from the Beijing Games of 2008 also now risk losing their medals thanks to a retrospective doping probe.

Alerted by a Russian whistle-blower, the World Anti-Doping Agency established a commission that last year uncovered an extensive state-sponsored program of administering performance-enhancing drugs to top Russian athletes. The All-Russia Athletic Federation has been suspended from competition since last November. According to the new allegations, which have been made by the former head of Russia’s antidoping laboratory, state security agents were involved in a complex scheme to falsify Sochi athletes’ test samples and prevent detection of the Russian team’s systemic doping.

“All this simply looks like slander by a turncoat,” said the presidential spokesman Dmitri S. Peskov, giving the usual knee-jerk response. But realizing that the Russian team faced possible exclusion from this year’s Games in Rio, the Kremlin changed tack.

“We are very sorry that athletes who tried to deceive us, and the world, were not caught sooner,” wrote Russia’s sports minister, Vitaly Mutko, in a British newspaper. Officials have apparently decided to sacrifice some athletes in order to save the federation in time for the summer Olympics. Quite frankly, I am scared to imagine what Mr. Putin might do if Russia is barred from Rio.

Turning victories into a national religion may once have seemed a good idea. One cannot turn a country around in just a few years, but inspirational, feel-good narratives do help people find purpose during hard times.

I went to school in the old Soviet Union, and it was as I went to university that Russia’s transition to a post-Soviet state occurred. The process was not pretty. We did feel perhaps that our country was diminished, but we worked hard and never felt humiliated.

Of course, there were some who did feel degraded, party officials or former K.G.B. agents probably among them, but at first they were not a dominating force. Since the turn of the century, however, that has changed. Those who were upset about their loss of status have used these years of rule to convert people to their creed.

Celebrations of Victory Day, marking the Soviet Union’s triumph in World War II, were always a big family event when I was little — my two grandfathers, then still alive, were both war veterans. During the past decade or so, though, the holiday has mutated into more than a day of remembrance. As a purported nation-building exercise, it has evolved into a full-fledged cult.

Today’s Russia still does not feel like a humiliated society exactly, but it does feel like a bitter and disillusioned one. Every country, Russia included, needs uplifting narratives, but there is a psychological trap in turning recognition into a cult. If attaining success at all costs becomes acceptable, then any failure leads to recrimination and blame.

Maxim Trudolyubov, an editor at large for the business newspaper Vedomosti, writes The Russia File blog for the Kennan Institute and is a fellow at the Bosch Academy in Berlin.