IT is widely assumed that the Northern Ireland conflict was settled in 1998 with the signing of the Good Friday Agreement. The war was over and the good guys had won.

Many Americans may even derive satisfaction from the role played by American presidents and political grandees — notably, President Clinton’s point man, George J. Mitchell, who presided over the negotiations leading to the agreement.

Yet the deal delivered by Senator Mitchell contained the seeds of its own destruction. In effect, the Good Friday Agreement assigned every person in Northern Ireland to either the unionist or nationalist camp, and the decision-making institutions it created, the Northern Ireland Assembly and its accompanying Executive, were designed to be balanced between the two camps. The plan was not to eliminate sectarianism, but to manage its manifestations.

Elections under the agreement take the form of each community’s selecting a party to champion its interests vis-à-vis the “other side.” This has ensured the dominance of the most uncompromising advocates for each community. 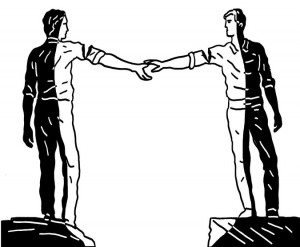 As a result, the power-sharing mechanism has been plagued by crises from the outset. The question at the heart of the latest political convulsion is whether the Irish Republican Army, the paramilitary arm of the nationalist party Sinn Fein, ever really exited the stage. Or does it lurk in the wings, ready to reprise its role if the political wing cannot deliver?

On Aug. 12, a former I.R.A. member named Kevin McGuigan was murdered in Belfast. Northern Ireland’s police chief, George Hamilton, said he believed that the I.R.A. itself — supposedly disbanded after the Good Friday Agreement — was involved in the killing, even if the assassination had not been sanctioned by its leadership. Although it poses no threat to Britain’s national security, he explained, the I.R.A. continues to exist.

No one in Northern Ireland doubts that the McGuigan killing was in retaliation for the murder three months earlier of a former Belfast commander of the Provisionals, or “Provos,” as the I.R.A. is commonly known. But the effect of this score-settling among Republicans has been incendiary.

Chief Constable Hamilton’s statements were enough to throw the administration into disarray, with the Democratic Unionist Party threatening to pull out of the Executive. To the Democratic Unionist leader, Peter Robinson, the notion that their main partners in the government of Northern Ireland, Sinn Fein, secretly maintained a paramilitary capability was unacceptable. If the unionists followed through on a withdrawal from power-sharing, the entire edifice of the Good Friday Agreement would collapse — possibly forcing Prime Minister David Cameron to restore direct rule from Westminster.

Cynical observers reckon that such a calamity is unlikely. They argue that Democratic Unionist Party and Sinn Fein politicians have equally come to love their sinecures and won’t easily give them up. Their argument is strengthened by the fact that, despite all, the Democratic Unionist Party continues to attend all-party talks on a way out of the difficulties. What’s certain is that the latest impasse is the most fraught so far.

The Cameron government bought itself time by appointing a commission to assess the cease-fire status of the I.R.A. and other paramilitary groups. It is scheduled to report in mid-October.

The fundamental problem is the sectarian basis of the Good Friday Agreement itself, which was originally negotiated between two moderate parties: the Ulster Unionist Party and the nationalist Social Democratic and Labour Party. Their leaders, David Trimble and John Hume, were awarded the 1998 Nobel Peace Prize.

Today, Mr. Trimble and Mr. Hume have both retired from active politics and each of their parties has been marginalized. In elections in 2003, the Democratic Unionists became the largest unionist party in the Assembly, and Sinn Fein eclipsed the S.D.L.P. in the same year.

Mr. McGuigan wasn’t the first person since the signing of the agreement to have crossed the Provos, and paid with his life. At least a dozen have been killed. The common thread is that each had challenged the dominance of Republicans over their “own” community. Some were labeled drug pushers, or “dissidents” out to resume armed struggle; others were criminals trying to muscle in on rackets, or just hard men willing to butt heads with the local Provos. For an organization like the I.R.A., respect is paramount.

The Democratic Unionists regarded the police chief’s statement as confirmation of their suspicions. The British, with long experience of winding down “national liberation” struggles, do not share this view. They know that armed movements that make peace with the imperial enemy must keep back some guns for self-defense, and to ensure a status on par with their contribution to the new dispensation.

This was made plain within a year of the signing of the agreement, when an I.R.A. killing in Belfast was shrugged off in a phrase generally attributed to Britain’s then secretary of state for Northern Ireland, Mo Mowlam, as “internal housekeeping.” As long as the guns aren’t pointed at police officers or soldiers, the British aren’t bothered.

But the Democratic Unionists have never been at ease in office with Sinn Fein. They will comb the commission’s report for justifications to jump ship.

The collapse of the agreement need not spell disaster. Sustaining a crisis-ridden system based on separate identities has been an exercise in building and burning bridges simultaneously. Northern Ireland needs a political system based on class and economic interests, rather than on community and identity.

Eamonn McCann, an author and activist, is a columnist for The Irish Times.