On 2 March, the UN General Assembly voted by a huge margin for a resolution deploring Russia’s “special military operation” in Ukraine. Fully 141 UN member states supported the measure. Only five (Belarus, DPRK, Eritrea, Syria and Russia itself) opposed it (see map above). This vote was a signal success for Ukraine and its mostly Western allies, who have argued throughout the crisis that Russia’s actions are of global concern – challenging the principles of sovereignty and non-use of force enshrined in the UN Charter – rather than solely a challenge to European security. U.S. President Joe Biden articulated the need for worldwide solidarity with Ukraine the night before the General Assembly vote in his State of the Union address, arguing that the war will leave “Russia weaker and the rest of the world stronger”.

Yet despite overwhelming support for the resolution, there were noteworthy divisions among UN member states about how to respond to the crisis. Three of the so-called BRICS countries – China, India and South Africa – abstained from the vote. A fourth member of the group, Brazil, voted yes, even though President Jair Bolsonaro has been trying to cultivate closer ties with Moscow. The African group split, with 28 members backing the resolution, and 25 either abstaining or not voting at all. By contrast, the Gulf Arab countries, which seemed wary of offending Russia at first, voted in favour of the text after U.S. lobbying.

What explains the differences in regional and national attitudes toward the Ukraine crisis? A series of short case studies by Crisis Group experts – covering eleven individual countries and the Gulf Arab states as a group – reveals a wide array of political factors at work. These include geopolitical factors, economic pressures and security concerns but sometimes also domestic political tensions and disputes. In some cases, governments have allowed questions of sovereignty and order to trump their specific interests: Mexico, for example, appears to have put aside a desire for increased trade with Russia out of sympathy for Ukraine. But many governments have calibrated their position according to more immediate goals. The Ukraine conflict may be a matter of global concern, but states’ responses to it continue to be conditioned by internal political debates and foreign policy priorities.

This survey of national responses to the Ukraine crisis is divided by region, as follows:

The Middle East and Turkey: The Gulf countries, Iran, Israel and Turkey 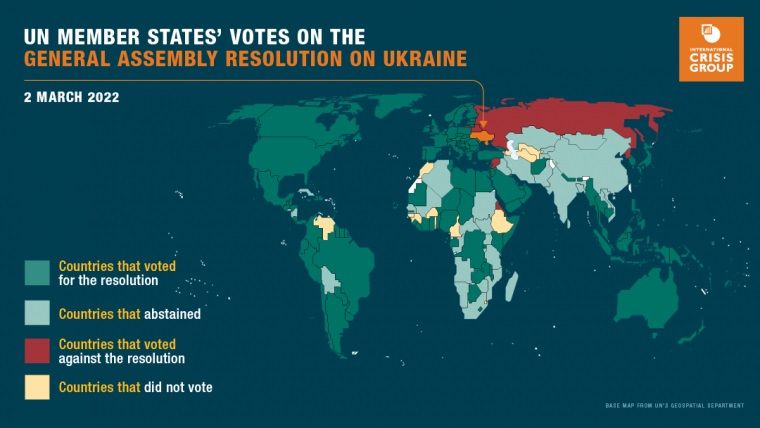