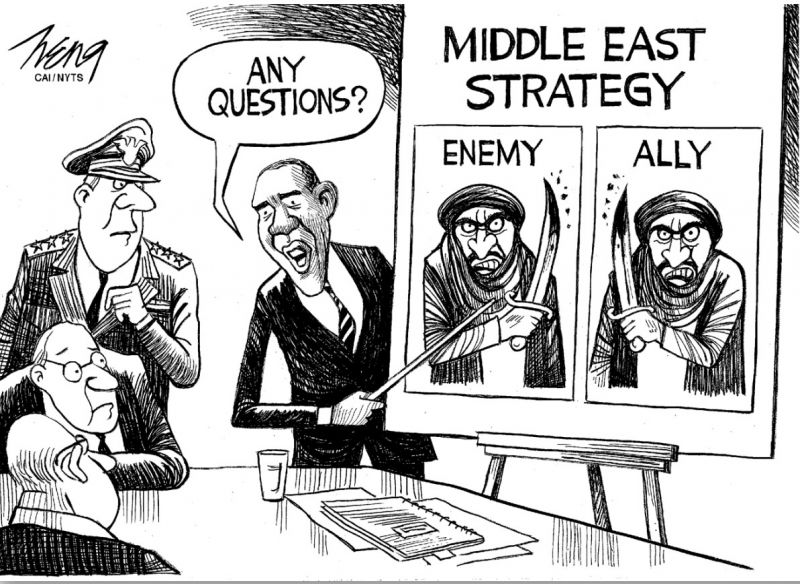 The decision by U.S. President Barack Obama to wage air war against the Islamic State, while leading an as yet nebulous — militarily speaking — new coalition of Arab and other ground forces, against what claims to be the New Islamic Caliphate still is swimming in a sea of confusion and doubt.

What does he think will be accomplished? Who is going to fight this war (rather than just bomb it)? History says that an asymmetric war has never been won by air power alone.

Moreover, is anyone sure who the players really are? Turkey still is in an ambiguous position although defending its own crucial border, across which jihad volunteers and Islamic State supplies have passed. What is its objective in this war, as an increasingly fundamentalist and predominantly Sunni state, as well as a NATO member? What would an enlarged Turkish role in the war mean for NATO?

I see virtually no interest in Western Europe in sending ground forces to fight the Islamic State. The only substantial ground army is France’s, tied up in Central and Northern Africa for the past year, where jihadists armed from Libya’s abandoned stocks are active (and now declaring “caliphates” of their own).

Britain has reportedly joined Australia and Canada in sending special forces, in reinforcement of the American trainers, special troops and ground observers for the carrier attacks. But special forces are just that — soldiers performing special tasks. They are not combat infantry/armor brigades, which are essential if the current balance of forces is to be changed.

The Iraqis and their Arab friends were supposed to furnish those, but have not done so in effective numbers or performance, and are not likely to do so in the foreseeable future no matter how much additional training they are given by the American army — which has already spent a decade in Iraq trying and failing to build a nonsectarian Iraqi army, against the sectarian resistance of the Shiite government the United States put in place in that country.

What is the future role, as seen in Washington, of the Syrian government? It provides the most formidable ground enemy of the Islamic State, at the same time that it is opposed by Washington and under attack from the “moderate” Syrian insurgents, which Obama says he supports (assuming that they really exist in any numbers).

What is the real role, now and in the future, of the U.S.’ great Middle Eastern ally, Saudi Arabia, which started all of this by decades of promoting and financing throughout the Muslim world its fiercely intolerant Wahhabi version of Islam? This is the state religion of the Saudi kingdom now, and at the same time is the doctrine driving the Islamic State movement itself. What is the significance of the reported family conflict among the Saudi princes that govern the county, at a moment when the aged King Saud is in failing health?

Moreover, is it fully appreciated in Washington that the “New Caliphate” has every intention of taking over the existing role in Islamic society of Saudi Arabia? It wants to conquer and occupy Mecca. If it succeeds, the Saudis themselves will be submitted to the ferocious discipline the Islamic State practices. The Saudi ladies who now complain that they are not allowed to drive cars will find themselves in a new world indeed!

After the failure of the all but interminable (so they seemed; but they now are ended) negotiations on Palestine’s fate, led by U.S. Secretary of State John Kerry, and the terrorism and sectarian murders that have followed on the West Bank and around Jerusalem, and Gaza’s having been given the “Dresden treatment,” as one Israeli commentator put it, or “had its grass cut” as some officials cynically preferred to express it, the deep mood among the Palestinians is increasingly in favor of a new uprising — another intifada.

If the Palestinians were to rise again against Israel, would Islamic State come to their aid? Would the Palestinians accept such aid? Or perhaps more to the point, would Israel make full-scale war with unlimited means against the Palestinians, in view of the declared intention of the Palestinian Authority to seek U.N. membership and pursue Israel before the International War Crimes Tribunal?

What would Obama’s position be in such an eventuality? Has this been considered in Washington?

Would the U.S., which has given a commitment to defend Israel against any attack, conduct an intervention with American ground troops against internal and outside resistance?

I have previously written that Islam itself is in a deep crisis, and America’s vainglorious and incompetent military interventions deeply contributed to this crisis. Now the crisis is at fever pitch. It was folly for a Congress obsessed with partisan politics, and irresponsible figures in the press and foreign policy community, to have demanded that the president take us into this war. He will suffer most dramatically, but American citizens will suffer, too, and the battered people of the Middle East most of all.

William Pfaff is an American journalist based in Paris who focuses on foreign policy issues. His latest book is The Irony of Manifest Destiny: The Tragedy of America’s Foreign Policy (www.williampfaff.com). © 2014 Tribune Content Agency.