Several years ago, while browsing the campus bookstore, one of us, Professor Segal, encountered a display table filled with Squirtles. A Squirtle is a plush-toy turtle manufactured by the company Russ Berrie. They were adorable and she couldn’t wait to take one home.

Afterward, Professor Segal began wondering why this toy was so attractive and suspected that its large, round eyes played a major role. It’s well known that a preference for large eyes emerges in humans by 5 months of age. But the Squirtle was even more appealing than many of its big-eyed competitors. Was there something else about its eyes?

Professor Segal consulted one of us, Professor Goetz, a colleague in evolutionary psychology, who suggested that because the Squirtle’s eyes were bordered in white, the cooperative eye hypothesis might have answers. This hypothesis, developed by the Japanese researchers Hiromi Kobayashi and Shiro Kohshima, holds that the opaque white outer coating of the human eye, or sclera, evolved to assist communication between people by signaling the direction of their gaze. 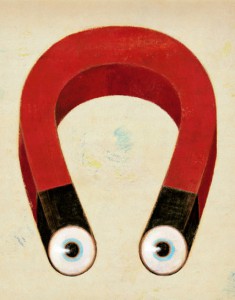 The clear visibility of the sclera is a uniquely human characteristic. Other primates, such as the African great apes, also track the gaze direction of others, yet their sclera are pigmented or, if white, not visible. The great apes appear to use head direction more than other cues when following another’s gaze.

Do humans have an instinctive preference for the whites of eyes, thus explaining the allure of the Squirtle? We conducted a study, to be published this year in the journal Evolution and Human Behavior, that suggested that the answer was yes.

First we had to make some stuffed animals. We used six specially designed sets of three or four animals each (three cats, three dogs, three octopuses, four elephants, four snails and four turtles). The animals within each set were identical except for the eyes, which varied with respect to the size, color and presence of sclera.

Our first group of study participants included 49 children between the ages of 4 and 8, recruited from a local elementary school. Our second group was made up of 40 adults between the ages of 19 and 29 who attended California State University, Fullerton.

Everyone was presented with one animal set at a time and instructed to point to the animal that he or she “liked the most.” The order of animal set presentation, as well as the positioning of each animal within a set, were counterbalanced across participants to ensure that the order or sequence of the animals was not a factor.

None of the adults, when questioned, could identify the purpose of the project, replying only that it had something to do with eyes. Their inability to discern the specific goal of the study increased our confidence that their answers did not reflect any cues regarding our hypothesis.

Consistent with our expectations, both the children and the adults favored the stuffed animals with visible white sclera. (An exception was the trio of cats, for which the children, but not the adults, did not show a clear preference. The reason for this finding is uncertain.)

We also had a third group of study participants: 25 children between the ages of 4 and 11 with autism spectrum disorder. “Gaze aversion,” or avoidance of eye contact, is a known marker of this disorder in infants and children. We predicted that these children would not display a consistent preference for any of the animals within each set, and this is indeed what we found.

Two additional observations were of particular interest. First, a slightly higher number of the children with autism spectrum disorder chose the small black eyes of the elephant and the turtle (i.e., eyes without visible white sclera) over the closed eyes of those same animals. It is possible that the combination of the open eye and lack of visible white sclera was less intimidating to them than eyes that concealed something unknown.

Our prediction that children with autism spectrum disorder would not display consistent preferences for these stuffed animals wasn’t a test of the cooperative eye hypothesis per se. (Had these children shown such preferences, that would have challenged only our understanding of their gaze aversion.) Still, our findings could be used to help shape therapeutic practices for these children. For example, stuffed animals, whose eyes may be less jarring to these children than are the eyes of humans, could be used as stepping stones to establishing eye contact with parents and peers.

More generally, our study supports the idea that the whites of our eyes play a key part in human social cognition. This can help us understand why certain cosmetic treatments are sought for the eyes, why wearing sunglasses may hinder social signaling — and of course, why some stuffed toys are preferred over others.

Nancy L. Segal is a professor, Aaron T. Goetz is an associate professor and Alberto C. Maldonado is a graduate student, all in the psychology department at California State University, Fullerton.