In medical circles, they call it the Hollywood Heart Attack. You’ve seen it: grimace of agony, clutching of chest, sudden collapse, the whole purple-prose panoply.

For my husband, Harold Lear, a doctor who became a patient just that suddenly, it was the first stop in a five-year medical odyssey, one cardiac crisis after another, ending with the ultimate stop in 1978.

Through all the years that followed, it remained my assumption that the Hollywood Heart Attack was it: the paradigm, the norm, the way heart attacks are supposed to happen.

I was relieved of this assumption two years ago, when I had one of my own. 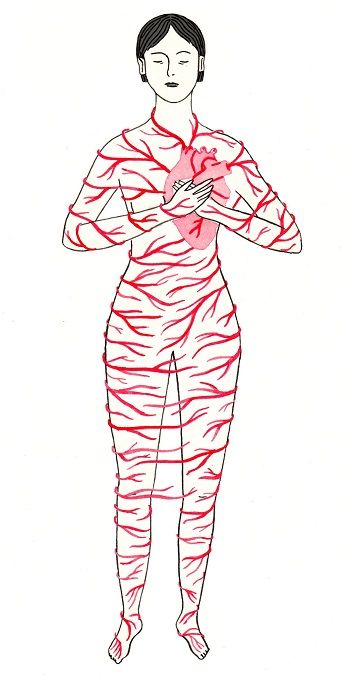 Mine went like this: altogether well one moment, vaguely unwell the next; fluttery sensation at the sternum, rising into the throat; mild chest pressure; then chills, sudden nausea, vomiting, some diarrhea. No high drama, just a mixed bag of somethings that added up to nothing you could name. Maybe flu, maybe a bad mussel, maybe too much wine, but the chest pressure caused me to say to my second husband, “Could this be a heart attack?” “Of course not,” he said. “It’s a stomach bug.”

Still, that pressure, slight but there, nagged at me. I called my doctor and reported my symptoms. The mention of diarrhea, almost never a presenting symptom in heart attacks, skewed the picture. He said, “It doesn’t sound like your heart. I can’t say a thousand percent that it’s not, but it doesn’t seem necessary to go racing to the emergency room with the way you feel now. Just see it through and come in for an EKG in the morning.”

The pressure eased. I slept, and woke the next morning feeling well. I went for the test mainly because I had said that I would, fully expecting to be told that I was healthy. First the EKG and then the echocardiogram told a different story: a substantial heart attack, “less than massive,” my doctor said, “but more than mild.” We were both stunned.

Suddenly I found myself living in a sequel: same hospital where Hal had worked and died, same coronary unit, same cardiologist, same everything; different husband wheeling me in my wheelchair through the corridors where I had wheeled Hal in his. Ghosts in every corner.

With a stent implanted in an occluded artery, I recovered fast and was cleared to leave in four days, but a bad hospital-acquired infection kept me there four weeks — time enough for a revelatory education about women and hearts.

Surprise No. 1: The biggest killer of American women is not breast cancer, as many people believe. It is heart disease. Should I have been surprised? Of course not. The American Heart Association keeps telling us about our hearts and we keep not listening, possibly because we are so fearful of cancer that we have no fear to spare, as we lie on our beds dutifully palpating ourselves for the lumps that we pray not to find.

Our hearts kill more of us than all kinds of cancer combined.

Surprise No. 2: I learn that Hal’s attack and mine are textbook illustrations of how vivid the gender differences can be. I learn that men more typically have “crushing” pain; women, nausea. That women are likelier to have early warning signs, such as unaccustomed fatigue or insomnia (unaccustomed: That’s the key word here). That we are likelier — this spooked me and kept me, for months, glued to calendars — to die within a year of a heart attack. That our symptoms can be so varied and nuanced that we feel no fear, seek no help, and possibly die — which may be why, although more men have heart attacks, a greater percentage of women die of them.

All these gender distinctions strike me as marvelously curious. I begin, as I did during Hal’s many emergency admissions, interviewing doctors and nurses and keeping a journal.

A nurse practitioner offers a graphic tutorial. Big, broad, a Valkyrie, she plants herself at the foot of my bed, puts one hand beneath her nose, as though in salute, and the other at her pelvis, and says, “In women, from here to here, anything could be a symptom.” Thus encompassing jaw, neck, throat, back, shoulders, chest, arms, diaphragm, abdomen.

“It’s just information,” she says. “It’s good to be informed, not terrified.”

The question looms: Why should such differences be?

Answer: Nobody knows for sure.

There are theories. Many. It may be because a woman’s arteries are narrower than a man’s, or because her microvascular system functions less efficiently, or because her heart beats faster (verging, this, on metaphor), or because it takes longer to relax between beats, or...

Until shockingly recently — in fact, until this millennium — there was minimal research on women’s heart attacks because of widespread belief in the medical community that women did not have heart attacks. (When the American Heart Association introduced its Prudent Diet in the 1950s, it issued a pamphlet titled “The Way to a Man’s Heart.”

Research studies commonly used all-male subjects. Men with abnormal test results were treated far more aggressively than women with the same results. Women reporting the same symptoms as men were at least twice as likely to receive — no surprise here — a psychiatric diagnosis.

In a 1996 national survey of doctors, two-thirds were unaware of gender differences in symptoms and warning signs of heart attacks.

Medicine did not begin cleaning up its act until 2001, when a study from the United States Institute of Medicine analyzed masses of data, confirmed a prevalent gender bias in all areas of medical research, and urged reform. So now there is improvement, though women still make up only 24 percent of all participants in heart-related studies. Just a few days ago, the National Institutes of Health announced that it will distribute $10.1 million in grants for scientists to include more women in clinical trials, which should give us more information.

What we already know is that nearly a half-million women are stricken annually by heart disease. That it is crucial to get help fast. That symptoms may include neck pain, shoulder pain, back pain, belly pain, et al. But what we are still not told is how to know when back pain, that endemic American complaint, is a possible warning sign, and when a cigar is just a cigar?

Here my own doctor supplies a missing nugget of common sense: “Don’t be reporting every little kvetch. Use discretion. But if it is a symptom unlike any you have experienced before, make the call. Get a reality check.”

I think of my Valkyrie: It’s good to be informed, not terrified. It sounds like something cross-stitched on a sampler. In my mind’s eye, it is a sampler, hanging sweetly, safely, on the wall by my bed.