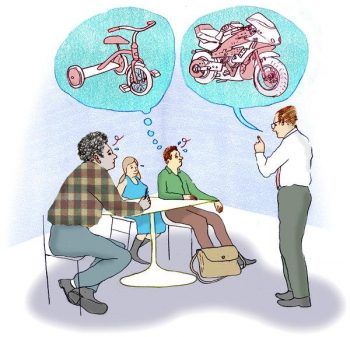 If you want to be great at something, learn from the best. What could be better than studying physics under Albert Einstein?

A lot, it turns out. Three years after publishing his first landmark paper on relativity, Einstein taught his debut course at the University of Bern. He wasn’t able to attract much interest in the esoteric subject of thermodynamics: Just three students signed up, and they were all friends of his. The next semester he had to cancel the class after only one student enrolled. A few years later, when Einstein pursued a position at the Swiss Federal Institute of Technology in Zurich, the president raised concerns about his lackluster teaching skills. Einstein eventually got the job after a friend vouched for him, but the friend admitted, “He is not a fine talker.” As his biographer Walter Isaacson summarized, “Einstein was never an inspired teacher, and his lectures tended to be regarded as disorganized.”

Although it’s often said that those who can’t do teach, the reality is that the best doers are often the worst teachers.

Two decades ago, I arrived at Harvard as an undergraduate excited to soak up the brilliance of professors who had won Nobels and Pulitzers. But by the end of the first month of my freshman year, it was clear that these world-class experts were my worst teachers. My distinguished art history professor raved about Michelangelo’s pietra serena molding but didn’t articulate why it was significant. My renowned astrophysics professor taught us how the universe seemed to be expanding, but never bothered to explain what it was expanding into (still waiting for someone to demystify that one).

It wasn’t that they didn’t care about teaching. It was that they knew too much about their subject, and had mastered it too long ago, to relate to my ignorance about it. Social scientists call it the curse of knowledge. As the psychologist Sian Beilock, now the president of Barnard College, writes, “As you get better and better at what you do, your ability to communicate your understanding or to help others learn that skill often gets worse and worse.”

I’ve come to believe that if you want to learn something new, there are three factors that you should keep in mind when choosing a teacher — whether it’s a professor or mentor or soccer coach.

First, pay attention to how long it has been since a teacher studied the material. Elite universities love to boast about how most of their classes are taught by top faculty. Yet most of my great teachers were graduate students. Because they had just learned the material themselves, they had an easier time remembering what it was like to be a beginner. Instead of studying under people who have learned the most, it can be wise to study under people who have learned the most recently.

Second, consider how difficult it was for the educator to master the material. We often gravitate toward prodigies like Einstein because their expertise seems so effortless. That’s a mistake. We should be learning from overachievers: the people who accomplish the most with the least natural talent and opportunity.

In high school and college, I competed as a springboard diver, and I once asked an Olympian if he had a trick for learning to do three and a half somersaults. His answer: Go up in a ball and spin fast. He was so naturally talented that he never had to learn the mechanics. He simply did it. The most useful explanation I got was from my coach, Eric Best, who had spent seven years trying to get that dive right and was able to walk me through the physics with stunning clarity. The physical limitations that prevented him from becoming an Olympic-caliber diver himself led him to gain the knowledge to become an Olympic-caliber coach.

Third, focus as much on how well the teacher communicates the material as on how well the teacher knows the material. Communication is especially hard for experts teaching basic classes. That might be one reason evidence shows that when college students take an introductory class with a lecturer who’s not on the tenure track, they go on to get higher grades in a more advanced class in that subject.

This is why I recommend creating separate tenure tracks for teachers and researchers. Instead of just learning from researchers who spend their days dividing cells in a lab or churning out code in front of a computer, you can take classes with people who study the most effective methods for teaching cell division and JavaScript.

Here’s another flaw in that “Those who can’t do, teach” canard: Teachers often turn into great doers.

After all, the best way to learn something is not to do it but to teach it. You understand it better after you explain it — and you remember it better after retrieving and sharing it.

As you gain experience studying and explaining a skill, you might actually improve your ability to execute that skill. A powerful example comes from a study of what happens when teachers become doers. Although appointing a business school professor as an executive sounds like a terrible idea, researchers managed to find more than 200 companies that did it. Compared with closely matched industry competitors, the companies with ex-professors in their executive ranks generated significantly higher revenues per employee, especially if those former teachers were in vice president roles where they could leverage their academic expertise. Knowledge from researching and teaching didn’t prevent them from making good decisions; it actually seemed to help.

In education, we often assume that a successful career qualifies someone to teach. It’s why business schools love to hire former executives as professors. But we’re doing it backward: We should be sending teachers out to run businesses.

Of course, there’s probably a selection bias in the data: Maybe only the competent professors landed executive jobs. But this reinforces my point that doing and teaching are distinct skills. Being good at one doesn’t mean you’re bad at the other.

Before universities recruit high achievers, it would be a good idea to find out whether they can teach. Before you seek out an expert as your teacher or coach, remember that it’s not just about what they know; it’s about how recently and easily they learned it, and how clearly and enthusiastically they communicate it. Studies of world-class scientists, musicians, athletes and artists reveal that they didn’t have top teachers or coaches from a young age; they started with a teacher or coach who made it fun and enjoyable to learn.

Being a great physicist doesn’t make you a great physics teacher. You don’t want to take your first physics class with Einstein. You want to learn from his protégé who has spent years figuring out how to explain what it would be like to chase a beam of light.

Adam Grant is an organizational psychologist at the Wharton School of the University of Pennsylvania, the author of Give and Take, Originals and Option B with Sheryl Sandberg, and the host of WorkLife, a TED podcast.