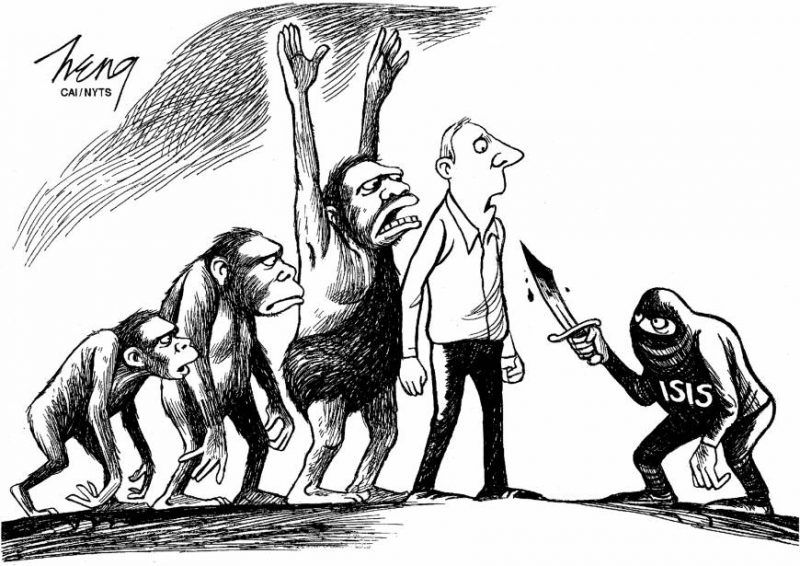 The threats to peace from Putin’s Russia are paralleled by the instability in the Middle East caused largely by Islamic extremism, which poses a particular menace to democracy and human rights. The barbaric murder of two Japanese hostages underlines the dangers to all civilized societies.

The Islamic State group has largely taken over from al-Qaida as the leading exponent of Islamic extremism, although there are other Islamic extremist organizations such as Boko Haram in Nigeria and al Shabaab in Somalia and Kenya, which pose serious threats to peace and human rights.

The civil war in Syria, which has led to over 100,000 deaths and many millions of refugees, provided fertile ground for extremists. President Bashar Assad with the backing of Shiite-led Iran had discriminated against the Sunni majority in Syria. The opposition to Assad was divided and the more liberal elements were weak. Sunni extremists, with the backing of traditionalist and puritanical religious leaders in other Middle Eastern states, took advantage of the chaos and proclaimed a holy war. They called themselves the successors to the Ottoman Caliphate, which had existed under the Ottoman dynasty of the Ottoman Empire, and proclaimed the establishment of a theocratic Islamic state.

The Islamic State group, which declares adherence to an uncompromising interpretation of Islam, imposes strict Shariah law. It asserts that apostates from Islam deserve death and persecutes adherents of other religions. In areas under its rule, women must be segregated and their task is to produce children

The Islamic State group spread out of Syria into Iraq and seemed at one point likely to take Baghdad, but has been pushed back by U.S.-led air strikes and tough fighting by Kurdish forces. It has attracted many hundreds of young Muslims from Europe who have been radicalized into believing that the Islamic State is waging a holy war and that the societies in which they have grown up are decadent. Islamic State is anti-democratic and anti-Jewish.

European countries such as France, Belgium and Denmark — where all of the recent terrorist murders and anti-Semitic attacks have taken place — worry that there will be further incidents especially when some of these “jihadists,” who are ready to die in killing others in the name of Islam, return.

It is estimated that 200 to 300 young Muslims from Britain have joined the Islamic State group in Syria by crossing the long and porous border between Turkey and Syria. These include a small number of girls as young as 15 who have been smuggled by traffickers into Syria where they will doubtless end up as sex slaves. If and when these jihadists return to Britain from Syria, they could be prosecuted for going to fight in Syria, but the police and the security service face a huge problem in keeping tabs them.

The revelation that “Jihadi John,” who appeared in videos showing the beheading of Islamic State hostages was in fact a Kuwaiti-born British Muslim by the name of Mohammed Emwazi has increased official concerns. These have led to the threat level of terrorist incidents in Britain being raised from “substantial” to “severe.”

The debate on how and why young Muslims are being radicalized has intensified. In the case of Emwazi, a graduate of Westminster University, it was not poverty or oppression. The suggestion by one organization that ham-handed handling by the security service was the cause is incredible. There is no evidence that there were extremist elements at work in the secondary school in central London, which he attended.

Radical preachers might have had access to him at university, but there is no easy way of stopping such preaching while upholding the basic principles of free speech, although universities can and should ensure that the sexes are not segregated at lectures and meetings.

Freedom of religion is a basic human right and we must do all we can to guarantee that it is not infringed. However, some Muslims in Britain and other democratic states sadly do not uphold the principles of tolerance and equality, which we regard as fundamental.

There are still many cases in Britain of female genital mutilation being inflicted on Muslim girls. Especially in families from the Indian subcontinent, too many girls are still being forced to marry a husband chosen by their parents. In cases of sex outside marriage, a few regard “honor killing” as justified.

British public opinion has been shocked by recent revelations of sexual grooming, rape and perverted sex attacks by gangs of men largely of Pakistani origin in Rotherham, Rochdale and Oxford. The criminals at first apparently avoided exposure because of fears that revelation of the origins of the criminals involved would be seen as racist.

Believers in other faiths, or in none, are not in a position to argue the fundamentals of the Islamic faith and do not want to be considered Islamophobes. It is up to Islam’s leaders to show that jihad, which extremists interpret as mandating “holy war,” is not to be taken literally. They must also make it clear that Islam is not a religion of the sword and denounce the doctrine that anyone renouncing Islam deserves to be killed. They also need to show that they renounce the barbaric penalties prescribed in Shariah law and accept that these are not fundamental to Islam.

Fatwas (calling for the killing of the subject) such as that placed on the author Salman Rushdie have no place in the modern world.

An opinion survey of Muslims in Britain after the Charlie Hebdo incident, which showed that more than a quarter sympathized with the motives of the killers, suggests that there is a long way to go in persuading all Muslims in Britain to uphold the values of a democratic and tolerant society.

The fight against Islamic State will not be won solely by kicking Islamic State out of Iraq or even out of Syria and Libya. It will be won only if Muslims throughout the world not merely denounce extremism but actively propagate tolerance and equality.

Hugh Cortazzi served as Britain’s ambassador to Japan from 1980-1884.