President Emmanuel Macron of France, on a quest to liberalize the economy, has now confronted a towering foe that has humbled would-be reformers before him: the railway unions.

Mr. Macron wants to turn the state-owned company, SNCF, into a joint stock enterprise and rein in the benefits and pay raises given to railway workers, some of whom can retire on a pension at as young as 52. The unions have responded with a rolling strike that will last into June and could threaten the commutes of the railways’ 4.5 million daily passengers. Mr. Macron is gambling that he can win the contest of public opinion. He is also seizing on one of history’s durable rules: changing a nation goes hand-in-hand with changing its rail system.

Britain provides a useful nearby example. That nation’s extraordinary network of iron rails sprung to life in an atmosphere of corporate chaos in the 1830s — a signature development of the Industrial Revolution — and came under state control as British Railways in 1948 as a part of the nationalizing wave of the postwar years. As Margaret Thatcher reversed those trends and privatized large segments of the economy in the 1980s, she targeted the British Railways onion, peeling off its catering and hotel functions one property at a time, then selling off the Sealink ferries. Her successor John Major succeeded in spinning off the once-unified system into 25 “train operating units” run by franchisees — since then, a source of reliable complaint from passengers but a powerful symbol of British capitalism. 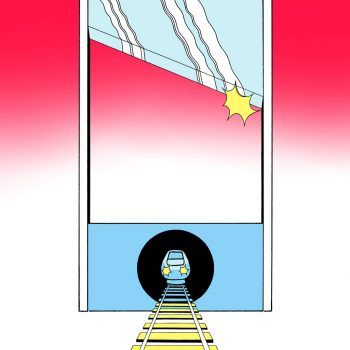 Or look to the United States, which once had 20,000 passenger trains roaring down a quarter-million miles of active track every day: a dynamic country fueled on the coal and steam of locomotives. After World War II, a powerful coalition of Texas oil interests and Detroit auto manufacturers helped push through the Federal Highway Aid Act of 1956 that jump-started the interstate highway system. Railroad companies were encouraged to dump passenger service, and this — among other factors — helped bring massive structural transformation to the country: broadening the footprint of suburban sprawl, addicting Americans to petroleum, changing agricultural and retail patterns and, as a footnote, sending the once-mighty American passenger train into the perpetual nursing home of Amtrak.

Other global examples, both historic and recent, show how state metamorphosis manifests in the railbed. Russia became a bicontinental power by extending its rails into Siberia. Benito Mussolini famously took credit for Italian rail upgrades. The British unified thousands of principalities in colonial India not through language but through railways, and when the government of former Prime Minister Manmohan Singh sought to ramp up the economy in the mid-2000s, it cut hiring quotas at Indian Railways and promoted round-the-clock freight loading. China sought to hit six percent growth targets through the last decade by building a stupendous $508 billion network of high-speed trains knitting together its major cities. Last year, Kenya opened the Madaraka Express between the port at Mombasa and the capital of Nairobi that can carry 22 million tons of cargo a year, strengthening its dependence on imports and deepening its reliance on Asia.

The calls to reform France’s SNCF is partly coming from the outside — the European Union requires members to open railways to competition by January 2019. Still, Mr. Macron is taking aim at an institution that — for all its glories and faults — comes close to representing the soul of France itself, a representation of the permanent state indifferent to the winds of politics ever since Emperor Napoleon III provided a state guarantee of interest to bondholders in 1852, and instructed Georges-Eugene Haussmann to give the marbled palaces of railway stations an honored place in his redesign of Parisian boulevards.

Lines radiated outward from the Gare du Nord, Gare de l’Est and Gare d’Orsay, among others, creating a Paris-centric concept of the hexagonal nation that persists today: The historian Jules Michelet perceived it as a grand tool of unification. “The chateau represents pleasure, the caprice of one man; the railway is for everyone’s use, bringing France together, bringing Lyon and Paris into communion with one another,” he is reported to have said after a ride to Versailles. Gustav Eiffel made himself a celebrity engineer with railway bridges before he ever attempted a tower, and France remade its countryside with suburbs anchored to railway stations.

The heavy hand of Paris brought distinctively French touches: padded seats even in third class, an unwieldy timetable the size of a dictionary, the grandeur of the high-speed TGV, and a class of civil servants who call themselves cheminots with essentially a job for life and guaranteed sick leave, which created the old French joke that working for the railway must be dangerous because its employees are always getting ill.

From 1910 onward, the unions have made rail strikes a predictable element of the national vocabulary and a fearsome weapon deployed against unfriendly French politicians. When he was prime minister, Alain Juppé tried to reform the SNCF. He lasted only two years in office after a set of strikes in 1995 made commuters miserable and turned him into a pariah. Mr. Macron is not just trying to repeal regulations; he is fighting an employment culture with lengthy taproots and outsized influence across other sectors.

France is an excellent case study in the truism that a national rail network is the spirit of the country in miniature, a little state within the state. For Mr. Macron to successfully take SNCF — and with it, France — in a different direction would be an act of true Napoleonic audacity.

Tom Zoellner is the author of Train: Riding the Rails That Created the Modern World — from the Trans-Siberian to the Southwest Chief, among other books.