Transferring cash to poor families, on the condition that their kids attend school and get vaccinations, has been shown to be an effective way to reduce poverty and improve human health and well-being. Latin America is widely recognized as the pioneer of large-scale conditional transfer programs, starting with Mexico in the late 1990s and expanding across Brazil over the past decade.

Now these programs have the potential for making a serious dent in poverty in India. Under the acronym JAM — Jan Dhan, Aadhaar, Mobile — a quiet revolution of social welfare policy is unfolding. Jan Dhan is Prime Minister Narendra Modi’s flagship program to give poor people access to financial services, including bank accounts, credit and insurance. Aadhaar is the initiative to issue unique biometric identification cards to all Indians. Together with mobile money platforms, they will enable the state to transfer cash directly to those in need — without the money going through intermediaries that might take a cut.

India, the world’s largest democracy, is also the world’s largest poor country. The legitimacy of any elected government turns on its ability to provide for the poor. As such, both our federal and state governments subsidize a wide range of products and services with the expressed intention of making them affordable for the poor: rice, wheat, pulses, sugar, kerosene, cooking gas, naphtha, water, electricity, fertilizer, railways. The cost of these subsidies is about 4.2 percent of India’s gross domestic product, which is more than enough to raise the consumption level of every poor Indian household above the poverty line. 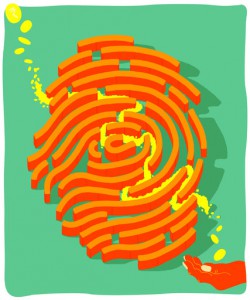 Sadly, government provision of these subsidies is associated with significant leakages. For example, as much as 41 percent of subsidized kerosene, which poor families use to light their homes, is “unaccounted for” and is probably lost to the black market. Dealers sell it on the side to middlemen who mix diesel into fuel and resell it, which is bad for both health and the environment.

Furthermore, some subsidies benefit those who do not need them. Power subsidies, for example, favor the (generally wealthier) two-thirds of India who have access to regular grid-provided electricity, and, in particular, wealthier households, which consume more power.

Why, then, do product subsidies form such a central part of the Indian government’s antipoverty policies? Subsidies are a way for states that lack implementation capacity to help the poor; it is easier to sell kerosene and food at subsidized prices than to run effective schools and public health systems.

The three elements of JAM are a potential game-changer. Consider the mind-boggling scale of each element. Nearly 118 million bank accounts have been opened through Jan Dhan. Nearly one billion citizens have a biometrically authenticated unique identity card through Aadhaar. And about half of Indians now have a cellphone (while only 3.7 percent have land lines).

Here’s one example of how these three elements can be put to work.

The Indian government subsidizes households’ purchases of cooking gas; these subsidies amounted to about $8 billion last year. Until recently, subsidies were provided by selling cylinders to beneficiaries at below-market prices. Now, prices have been deregulated, and the subsidy is delivered by depositing cash directly into beneficiaries’ bank accounts, which are linked to cellphones, so that only eligible beneficiaries — not “ghost” intermediaries — receive transfers.

Under the previous arrangement, the large gap between subsidized and unsubsidized prices created a thriving black market, where distributors diverted subsidized gas away from households to businesses for a premium. In new research with Prabhat Barnwal, an economist at Columbia University, we find that cash transfers reduced these “leakages,” resulting in estimated fiscal savings of about $2 billion.

The scope for extending these benefits is enormous. Imagine the possibility of rolling all subsidies into a single lump-sum cash transfer to households, an idea mooted decades ago by the economist Milton Friedman as the holy grail of efficient and equitable welfare policy. JAM makes this possible.

To realize the full benefits of JAM, the government needs — and has begun — to address both “first-mile” and “last-mile” challenges.

The “first-mile” challenges are identifying eligible beneficiaries and coordinating between states and government departments. To deliver means-tested benefits via cash transfers, the government will need a way of identifying the poor and linking beneficiaries to their bank accounts. Further, eligibility criteria and beneficiary rosters vary, and technology platforms, where they exist, may not be seamlessly interoperable. Hence the need for an extensive coordination exercise under the national government, which can incentivize states to come on board by potentially sharing fiscal savings with the states.

The “last-mile” challenge arises because cash transfer programs risk excluding genuine beneficiaries if they do not have bank accounts. Indeed, even if they have an account, they may live so far away from a bank — India has only 40,000 rural bank branches to serve 600,000 villages — that collecting benefits is arduous. Extending financial inclusion to reach the remotest and poorest will require nurturing banks that facilitate payments via mobile networks, which has achieved great success in countries such as Kenya. India can then leapfrog from a bank-less society to a cashless one just as it went from being phoneless to cellphone- saturated.

Over all, JAM offers substantial benefits for government, the economy and especially the poor. Government finances will be improved because of the reduced subsidy burden; at the same time, government will also be legitimized and strengthened because it can transfer resources to citizens faster and more reliably. Experimental evidence from the world’s largest workfare program — the Mahatma Gandhi National Rural Employment Guarantee Scheme — found that delivering wages via a biometrically authenticated payment system reduced corruption and enabled workers to receive salaries faster. With the poor protected, market forces can be allowed to allocate resources with enormous benefits for economywide efficiency and productivity enhancement. The chief beneficiaries will be India’s poor; cash transfers are not a panacea for eliminating their hardship, but can go a long way to improving their lives.

Siddharth George is a doctoral candidate in economics at Harvard. Arvind Subramanian is the chief economic adviser to the Indian government.