“Whither NATO” is probably the greatest snoozer headline of the past half-century. It has been used on editorials, op-ed articles, think-tank reports — anyplace an editor wants to communicate, “I’ve been forced at gunpoint to publish this essay, but for God’s sake don’t read it.” If Donald Trump had done nothing more than to create a legitimate occasion for calling a newspaper article “Whither NATO,” his place in history would be assured. Small, but assured. 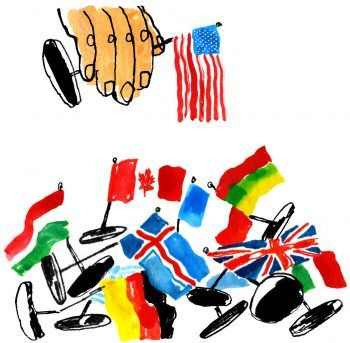 But Mr. Trump has gone further. He has actually put the future of NATO on the global agenda by saying, on his European trip in May, that the United States spends far more on the shared defense than our allies do. That, he declared, was going to stop. Chancellor Angela Merkel of Germany then said that the days when Europe could “rely fully” on others were “somewhat over,” which is essentially what President Trump had said, without the dainty qualifications.

So we’re all in agreement, right? NATO must reform, with a better deal for the United States, or it will disappear. Which will it be? You know the answer. There is no way NATO will disappear, and it probably won’t reform much either. At a time when the White House and the Kremlin seem to be giving away each other’s secrets faster than they can produce new ones, spending hundreds of billions of dollars on a military alliance against Russia does seem a bit indulgent. But NATO won’t disappear, because it never does.

After the Cold War ended but the American military spending did not, this was one of the issues that separated (or should I say “isolated”) responsible internationalists in both parties from the populist rabble rousers. Even the responsible internationalists would end their pleas for responsibility with what newspaper editors call a “to be sure” paragraph, taking back the entire argument and saying something like, “To be sure, NATO’s expenses should be scrutinized with care, and prudent pruning may be possible.”

People who don’t go to Davos every year to get globalized favor making the Europeans fork out more for what is — have you looked at a map lately? — more for their defense than ours. This may have made sense in the late 1940s, when Europe was prostrate and the Soviet Union was marauding. Does it make sense now?

On his recent trip to Europe, President Trump attacked European leaders in person and in public for failing to meet their defense obligations. Previous presidents have also wanted our fellow club members to pay their dues. Mr. Trump was not doing or saying anything especially new or bold. But earlier presidents, with their statesmanlike approach, had failed utterly to achieve a goal that most Americans likely would have found desirable. Mr. Trump, bombast and all, is surely more likely to make progress on that front than, say, the Council on Foreign Relations.

Michael Kinsley is a columnist at Vanity Fair and the author of Old Age: A Beginner’s Guide.