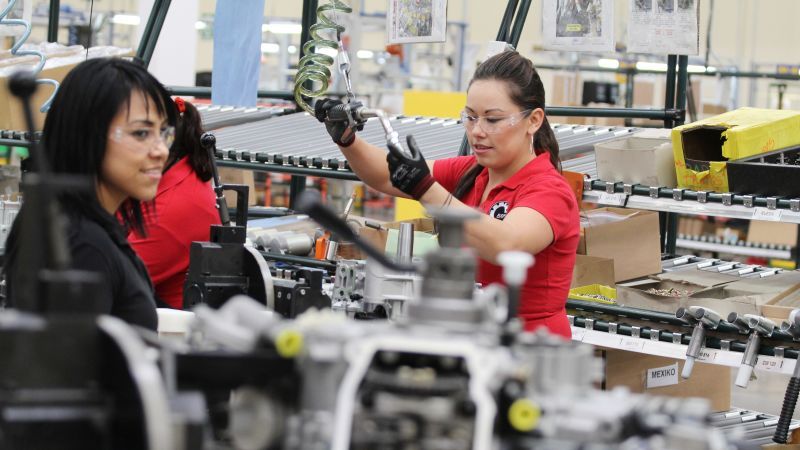 The prospects for Congress ratifying a new trade deal with Mexico and Canada improved last month when House Speaker Nancy Pelosi said, "we're moving ahead" and expressed hope for "a continuing path to yes."

No trade agreement is ever perfect. But the United States-Mexico-Canada Agreement (USMCA), the trade deal that could replace the North American Free Trade Agreement (NAFTA), is an improvement over NAFTA in several respects, especially when it comes to workers' rights and the environment.

Drafted in the early 1990s, NAFTA helped grow the US economy — as well as that of Canada and Mexico — and strengthened regional integration to an unprecedented level. Today, both countries are America's two largest trading partners, and our three-way trade supports more than 12 million US jobs.

But NAFTA lacks many of the modern provisions now standard in US trade agreements.

Environmental protection was addressed only belatedly in a side agreement that featured non-binding recommendations, not enforceable obligations. By contrast, USMCA brings all environmental obligations into the core of the agreement, which makes them enforceable. It includes provisions to combat trafficking in wildlife, fish and timber; to improve air quality; and to curb marine pollution.

NAFTA also addressed labor rights in a side agreement that did not contain binding obligations or standardized protections among Mexico, Canada and the United States. Wages remained low in Mexico, attracting American companies there for years. Mexico also lacked sufficient incentives to reform its labor laws, failing to recognize workers' right to collectively bargain and join unions.

By boosting wages and benefits in Mexico, such provisions will reduce US companies' incentives to outsource jobs. Those stronger labor protections will also help Mexican consumers and small businesses. When workers take home more money and feel more secure in their jobs, they spend more freely.

USMCA would also help bring back more manufacturing to the United States. It requires 40% to 45% of auto parts to be manufactured by workers earning at least $16 an hour. This wage floor, which American auto companies have supported, would help boost domestic production by encouraging more auto producers to set up — and keep — shop in the United States.

Medical innovation, for example, depends on strong intellectual property protections. It can take billions of dollars and over a decade to bring a drug from the lab to pharmacy shelves. Strong intellectual property laws allow innovators to be compensated for their work, which incentivizes future investment in research and development that can benefit patients everywhere.

Some Democrats worry that strengthening intellectual property protections abroad could raise drug prices in the United States. They fear that USMCA's robust intellectual property protections will allow manufacturers to keep drug costs in the United States higher for longer periods of time. Such concerns are unwarranted. In fact, nothing in USMCA would prevent lawmakers from working to lower drug prices at home.

The success of any trade deal hinges on its monitoring and enforcement provisions. Unlike NAFTA, the labor and environmental provisions in USMCA will be just as enforceable as other parts of the agreement.

Some lawmakers are concerned that Mexico won't actually enforce USMCA's labor requirements. To address those concerns, US Trade Representative Robert Lighthizer has been exploring additional mechanisms to verify Mexico's compliance. And Mexico is taking steps to ensure it will have in place the technical expertise, personnel and other resources necessary to fully implement the significant labor reforms it has undertaken.

Some have also questioned whether the agreement's state-to-state dispute settlement provisions — which currently allow any one of the three countries to block a claim brought by another country — will prove agile enough to deal with potential violations. Lighthizer is also examining ways to address this concern too.

Pelosi's calls to improve USMCA and Lighthizer's responsiveness are welcome developments. Indeed, this is not the first time Pelosi has been able to secure improvements to a trade deal prior to passage, as we saw happen when Congress first reviewed the agreements President George W. Bush had negotiated with Peru, Korea, Colombia and Panama.

If Congress decides to reject the deal, there is a real risk that President Trump may withdraw from NAFTA altogether. That would upend supply chains established over the past 25 years and devastate portions of the US economy. With a growing number of economists predicting a slowdown or recession, now is not the time to put millions of US jobs at risk.

Miriam Sapiro is a senior adviser to the Pass USMCA Coalition and served as acting and deputy US trade representative during the Obama administration. The opinions expressed in this commentary are her own.