After last week’s elections brought an end to majority rule by one party, Turkey faces the prospect of a coalition government. What was once considered undesirable, even unthinkable, now offers an opportunity to overhaul Turkey’s political culture and inch the country toward becoming a genuinely liberal democracy. That would be a historic shift.

Since its first electoral success in 2002, the Justice and Development Party, or A.K.P., of President Recep Tayyip Erdogan has enjoyed 13 years of parliamentary hegemony. Until recently, many people would have regarded the prospect of a grand coalition with trepidation: The idea of power-sharing in government was reviled because of past associations.

In the 1970s, coalition politics was tainted by political instability that led to a military coup. Then, in the ’90s, politicians discredited coalitions by espousing a populist politics that helped cause the country’s worst economic crisis of modern times. 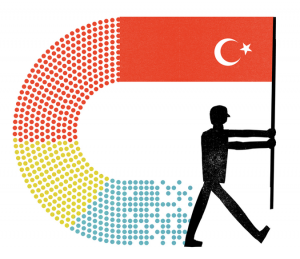 So there is much work to be done to restore the credibility of coalition politics if Turkey is to transition to a more inclusive, consensus-driven model. But it is also by far the best hope for a country facing deep-rooted domestic difficulties and regional challenges.

No Turkish government has enjoyed this power since the current Constitution was adopted in 1982. This “grand coalition” would therefore be in a unique position to start fixing the country’s structural problems by constitutional reform.

Chief among these is the skewed balance between the individual and the state. Turkey needs to reset its social contract by extending fundamental rights and freedoms. This should also include measures to give the judiciary genuine independence and impartiality — the lack of which has been a chronic failing of the Turkish system.

Finally, a revised Constitution must reflect a more inclusive understanding of national unity, which recognizes the heterogeneity of modern Turkey. These reforms are also indispensable for any lasting solution to the Kurdish problem.

The long period of A.K.P. rule was increasingly characterized by the party’s effort to impose a single set of socially conservative, Islamist-inspired values over the whole of society. If a party with Islamic affinities is now obliged to cohabit with a strongly secular one, this could also have a positive impact on Turkey’s foreign relations.

A coalition administration could oversee a retuned foreign policy that would return Turkey to its default position as a Western-allied, mainly Muslim country that can transcend the religious, sectarian and ethnic divisions elsewhere in the Middle East. This would entail a less assertive and more cautious policy toward Syria, where Ankara has been prone to dangerous meddling. A more pro-European stance would also bring more pressure to bear on Turkey’s European Union allies to clear the way to an eventual Turkish accession.

In coming days, the A.K. Party’s chairman and prime minister, Ahmet Davutoglu, will meet with Kemal Kilicdaroglu, the C.H.P. leader, to discuss the conditions of each for forming a coalition administration. At present, both the leaderships and grassroots of both parties are divided on the issue.

Forming a minority government is not an option for the A.K.P., since there’s no obvious incentive for any element of the opposition, excluded from executive power, to back the A.K. Party. The only other choice it does have would be to form an alliance with the Nationalist Movement Party, or M.H.P. But the nationalists’ leadership has made the suspension of talks on a Kurdish settlement a condition of its participation in a coalition.

For the A.K.P., such an alliance would further erode its support among Kurds and liberals. So an alliance with the C.H.P. appears to be the A.K.P.’s safest option.

The C.H.P., which will have difficulties reaching an accommodation with its ideological rival, could also try to form a minority government with the M.H.P. and the predominantly Kurdish, left-of-center People’s Democratic Party, or H.D.P., which won 80 seats by surpassing, for the the first time, the parliamentary threshold of 10 percent of the popular vote. But irreconcilable differences between the two parties will probably preclude an alliance.

The opportunity for the C.H.P., which has not governed since 1979, to return to power — even though it means partnership with the A.K.P. — may therefore prove irresistible. But to win the backing of his base, Mr. Kilicdaroglu will still need to gain his coalition partner’s agreement to a reform agenda that would include lowering that 10 percent threshold in national elections and overhauling the law on political parties, as well as consolidating the rule of law and improving freedom of expression and association.

The C.H.P. leader would also need to obtain guarantees that forming a coalition with A.K. Party will not prevent the Turkish Parliament from investigating corruption allegations against four members of the previous A.K.P. government.

That still leaves two further barriers to a grand coalition. The first is historical: The only precedent for a power-sharing administration with a constitutional majority was more than five decades ago, in 1961. It held together for less than 8 months.

The second relates to the residual power of the presidency. By leaving the A.K.P. far short of the super-majority needed to alter the Constitution, the election result meant that Mr. Erdogan had to put aside his ambition to create an executive presidency. But any new government built on a coalition needs him to abide by the current constitutional arrangements for a non-executive presidency.

For a grand coalition to succeed will depend, then, on whether Mr. Erdogan, Mr. Davutoglu and Mr. Kilicdaroglu can agree on maintaining the existing power relationship between the presidency and the executive. A dispute would not only force another round of elections, but would also block the path toward a more democratic Turkey.

Sinan Ulgen is the chairman of the Istanbul-based EDAM think tank and a visiting scholar at Carnegie Europe.