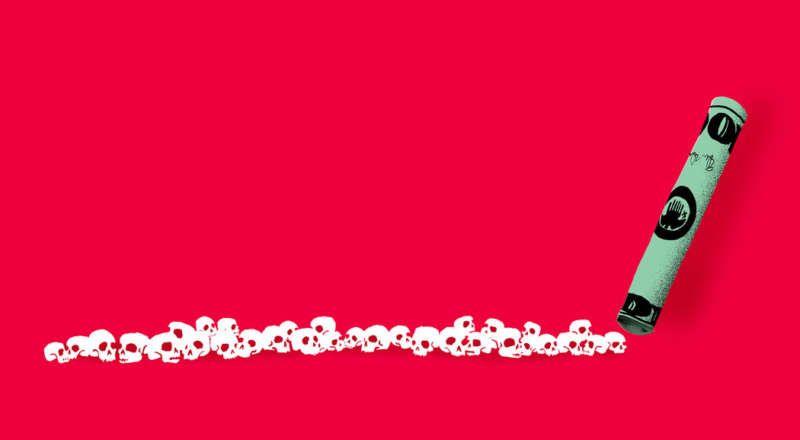 Many of my friends and classmates here in the United States care about making the world a better place, and they try to make purchases that reflect their values. Some have become vegetarians to save animals or fight climate change. Others buy cruelty-free cosmetics, fair-trade coffee or conflict-free diamonds.

Yet I’ve noticed at parties and festivals that some of these same people pop Ecstasy or snort cocaine. They think this drug use is a victimless crime. It’s not. Follow the supply chain and you’ll find a trail of horrific violence.

In Mexico, the official death toll from the past decade’s drug trade stands at over 185,000, with many of the dead innocent bystanders. And these tallies don’t include the thousands of people who have disappeared, including four members of my family who were kidnapped and never seen again. We were deprived of our loved ones without explanation, without even their bodies to cry over.

I was born and raised in a midsize town in northern Mexico. As a child, I biked and skated in the streets. But these days, kids aren’t allowed to play outside. Everyone has a heartbreaking story of how the drug trade has damaged his life.

Violence — whether among cartels, or between cartels and government forces — plagues cities along drug trafficking routes. Shops and restaurants shut their doors, employees are laid off. Cartel members routinely steal cars at gunpoint. They take over houses and factories for shelter and fire automatic weapons in public spaces. My relatives have been forced to drop to the ground at home and at the supermarket to avoid being shot.

While studying at Stanford University and living in California, I realized that most Americans — even those who consider themselves worldly and social-justice-oriented — remain unaware of their role in this violence.

The United States, with less than 5 percent of the world’s population, constitutes more than 30 percent of the global demand for illegal drugs, according to my calculations. Yes, there are addicts, but experts estimate that eight in 10 users — more than 20 million people in this country — take drugs recreationally. They come from all walks of life — artists, bankers, engineers, and high school, college and graduate students.

Most of these users know little of the Mexican cartels that produce the marijuana, cocaine, MDMA, meth, fentanyl, heroin and other drugs in Mexico, or import them from Asia or South America. But the biggest money in the drug business comes not from producing drugs but from smuggling them across the border and getting them to users, which requires cartels to control every step along the trafficking routes. To maintain that control, they fight over highways, ports, border crossings and political influence.

To prevent smaller criminal groups from growing and eventually competing with them, cartels also control other activities like human trafficking, kidnapping, music and software piracy, extortion and prostitution.

And to protect their huge profits, they kill competitors, journalists, policemen and innocents. My friend Maria, mother of a 14-year-old son, temporarily fled her low-income neighborhood in the city of Monterrey with her family when she realized a cartel was forcing boys to join the business. Two nights after their return, armed men entered her house and killed her son in front of her in retaliation.

While Mexico endures these atrocities, Americans are spending billions of dollars on illegal drugs. Exact figures for an illicit market are hard to obtain but estimates put the number at over $150 billion per year — more than the federal government spends on education, and four times as much as it spends on law enforcement. And Mexican cartels control virtually all of the American market, according to the Drug Enforcement Administration.

If cartels continue to have an incentive of that magnitude, our governments will never be able to put an end to the violence.

That’s why Americans must recognize that every time they buy illegal drugs they reward the cartels. If you think one person’s consumption is too small to make a difference, consider that $100 — what a recreational cocaine user might spend on a single weekend — buys the cartels 500 rounds of ammunition; $500 buys a new AR-15 rifle; $700 covers the monthly salary of one of their gunmen.

Without the vast profits from the drug trade, cartels would be infinitely less powerful, and our governments could neutralize them.

If you use illegal drugs, even just occasionally, please reconsider. Lives are at stake. Go for legal vices if you must. Even if you never use illegal drugs, you probably know people who do. Tell them about the trail of blood that led to their night of partying. If they had seen it firsthand, as I have, they wouldn’t buy those drugs.

We can shatter the misconception that recreational drug use is a victimless crime. We must put an end to the hypocrisy that allows people to make purchases based on their concerns about the environment, workers’ rights or animals — but not about killing people in Mexico.