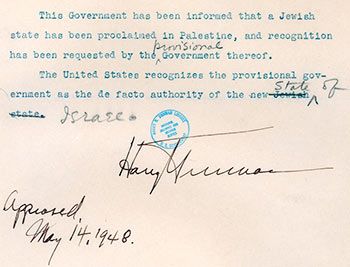 In the celebrations next week surrounding Israel's 60th anniversary, it should not be forgotten that there was an epic struggle in Washington over how to respond to Israel's declaration of independence on May 14, 1948. It led to the most serious disagreement President Harry Truman ever had with his revered secretary of state, George C. Marshall -- and with most of the foreign policy establishment. Twenty years ago, when I was helping Clark Clifford write his memoirs, I reviewed the historical record and interviewed all the living participants in that drama. The battle lines drawn then resonate still.

The British planned to leave Palestine at midnight on May 14. At that moment, the Jewish Agency, led by David Ben-Gurion, would proclaim the new (and still unnamed) Jewish state. The neighboring Arab states warned that fighting, which had already begun, would erupt into full-scale war at that moment.

The Jewish Agency proposed partitioning Palestine into two parts -- one Jewish, one Arab. But the State and Defense departments backed the British plan to turn Palestine over to the United Nations. In March, Truman privately promised Chaim Weizmann, the future president of Israel, that he would support partition -- only to learn the next day that the American ambassador to the United Nations had voted for U.N. trusteeship. Enraged, Truman wrote a private note on his calendar: "The State Dept. pulled the rug from under me today. The first I know about it is what I read in the newspapers! Isn't that hell? I'm now in the position of a liar and double-crosser. I've never felt so low in my life. . . ."

Truman blamed "third and fourth level" State Department officials -- especially the director of U.N. affairs, Dean Rusk, and the agency's counselor, Charles Bohlen. But opposition really came from an even more formidable group: the "wise men" who were simultaneously creating the great Truman foreign policy of the late 1940s -- among them Marshall, James V. Forrestal, George F. Kennan, Robert Lovett, John J. McCloy, Paul Nitze and Dean Acheson. To overrule State would mean Truman taking on Marshall, whom he regarded as "the greatest living American," a daunting task for a very unpopular president.

Beneath the surface lay unspoken but real anti-Semitism on the part of some (but not all) policymakers. The position of those opposing recognition was simple -- oil, numbers and history. "There are thirty million Arabs on one side and about 600,000 Jews on the other," Defense Secretary Forrestal told Clifford. "Why don't you face up to the realities?"

On May 12, Truman held a meeting in the Oval Office to decide the issue. Marshall and his universally respected deputy, Robert Lovett, made the case for delaying recognition -- and "delay" really meant "deny." Truman asked his young aide, Clark Clifford, to present the case for immediate recognition. When Clifford finished, Marshall, uncharacteristically, exploded. "I don't even know why Clifford is here. He is a domestic adviser, and this is a foreign policy matter. The only reason Clifford is here is that he is pressing a political consideration."

Marshall then uttered what Clifford would later call "the most remarkable threat I ever heard anyone make directly to a President." In an unusual top-secret memorandum Marshall wrote for the historical files after the meeting, the great general recorded his own words: "I said bluntly that if the President were to follow Mr. Clifford's advice and if in the elections I were to vote, I would vote against the President."

After this stunning moment, the meeting adjourned in disarray. In the next two days, Clifford looked for ways to get Marshall to accept recognition. Lovett, although still opposed to recognition, finally talked a reluctant Marshall into remaining silent if Truman acted. With only a few hours left until midnight in Tel Aviv, Clifford told the Jewish Agency to request immediate recognition of the new state, which still lacked a name. Truman announced recognition at 6:11 p.m. on May 14 -- 11 minutes after Ben-Gurion's declaration of independence in Tel Aviv. So rapidly was this done that in the official announcement, the typed words "Jewish State" are crossed out, replaced in Clifford's handwriting with "State of Israel." Thus the United States became the first nation to recognize Israel, as Truman and Clifford wanted. The secret of the Oval Office confrontation held for years, and a crisis in both domestic politics and foreign policy was narrowly averted.

Clifford insisted to me and others in countless discussions over the next 40 years that politics was not at the root of his position -- moral conviction was. Noting sharp divisions within the American Jewish community -- the substantial anti-Zionist faction among leading Jews included the publishers of both The Post and the New York Times -- Clifford had told Truman in his famous 1947 blueprint for Truman's presidential campaign that "a continued commitment to liberal political and economic policies" was the key to Jewish support.

But to this day, many think that Marshall and Lovett were right on the merits and that domestic politics was the real reason for Truman's decision. Israel, they argue, has been nothing but trouble for the United States.

I think this misses the point. Israel was going to come into existence whether or not Washington recognized it. But without American support from the very beginning, Israel's survival would have been at even greater risk. Even if European Jewry had not just emerged from the horrors of World War II, it would have been an unthinkable act of abandonment by the United States. Truman's decision, although opposed by almost the entire foreign policy establishment, was the right one -- and despite complicated consequences that continue to this day, it is a decision all Americans should recognize and admire.

Richard Holbrooke writes a monthly column for The Post. He co-authored Clark Clifford's Counsel to the President: A Memoir.