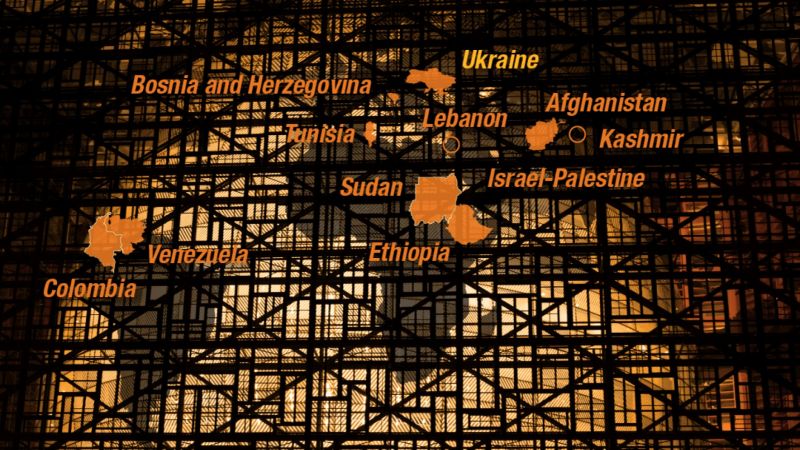 Since a wave of violence swept through Israel and the Palestinian territories in April-May 2021 and grabbed international attention, the Israeli-Palestinian conflict has again largely fallen off the world’s radar. Prospects for a viable peace process remain out of sight, and rhetorical commitments to a two-state solution by outside actors like the European Union (EU) and its member states seem more removed than ever from the steadily evolving reality on the ground. As the intensity of the 2021 fighting and the geographical spread of Palestinian protests showed, this state of affairs is becoming increasingly untenable.

Effective conflict resolution in Israel-Palestine would require an unlikely paradigm shift in international policy. The more realistic immediate need, given the circumstances, is to prevent the conflict from becoming much worse. Working with the U.S. and others, the EU and its member states should press Israel to take steps that would mitigate the impact of its de facto annexation of the occupied West Bank and support renewal of the Palestinian political sphere while working toward an approach to the conflict that would prioritise respecting the rights of Israelis and Palestinians equally.

The EU and its member states should:

The Israeli-Palestinian conflict grinds on without resolution or a blueprint for reaching one. The diplomatic vacuum should not be confused with stalemate: Israel’s military occupation of the Palestinian territories (East Jerusalem, the West Bank and Gaza) conceals de facto annexation in the form of land expropriation and settlement expansion as well as legal and administrative separation of the territories’ Palestinian and Jewish populations. The status quo is not stasis but creeping transformation.

The violence that roiled East Jerusalem, the West Bank and Israeli cities in April-May 2021, along with the eleven-day war between Israel and Hamas in Gaza, served as a powerful reminder that this status quo is dangerous. As the political horizon for Palestinians living under various forms of Israeli control keeps receding, spasms of conflict are becoming more severe and widespread.

At the epicentre this time stood – once again – occupied East Jerusalem, where a series of interconnected events combined to bring Palestinian protesters into the streets. These included the threatened eviction of Palestinian families from the Sheikh Jarrah neighbourhood; restrictions on Palestinian movement into East Jerusalem and around the Damascus Gate and the Holy Esplanade (the Haram al-Sharif and Temple Mount, sacred to Muslims and Jews, respectively) during the Muslim holy month of Ramadan; and Israel’s resistance to letting East Jerusalem’s Palestinian residents vote in Palestinian elections, which were scheduled for later that spring but were cancelled by PA Chairman Mahmoud Abbas, who likely feared that his Fatah faction would lose. Confrontations between Israeli police and demonstrators turned ugly, particularly near the Haram al-Sharif, where officers shot sponge-tipped bullets, stun grenades and tear gas canisters at Palestinians throwing stones, bottles and chairs.

Things escalated further from there. Citing a need to defend Jerusalem, Hamas fired a rocket barrage from Gaza at the city, and then also at other locations in Israel; Israel responded with a devastating air assault on Gaza that left much of the enclave’s civil infrastructure in ruins and over 250 people dead. Subsequently, protests broke out in the West Bank, which the Israeli army brutally suppressed. Israeli cities with mixed Jewish and Palestinian populations also saw an uncommon wave of protests and clashes between civilians, in which synagogues and mosques were targeted and, in some cases, mobs of Jewish vigilantes attacked Palestinian shops and individuals with the protection of Israeli authorities.

A new Israeli government elected in June, which replaced the cabinet of Prime Minister Benjamin Netanyahu, has brought little change. While adopting a softer tone toward Israel’s nominal allies than its predecessor had, it maintained Netanyahu’s uncompromising approach to the occupied territories. Settlement expansion and demolition of Palestinian homes continued apace; state-backed settler violence increased, devastating Palestinian livelihoods, especially during the critical olive harvest in September-November; and in October, the government banned six respected, European-funded Palestinian civil society organisations on the specious charge of affiliation with the Popular Front for the Liberation of Palestine, which Israel calls a “terrorist” organisation.

Meanwhile, the Palestinian Authority carried out its own repression of dissent, for instance, by arresting opposition voices (one of whom, Nizar Banat, died in PA custody following his arrest). It also stuck by Abbas’s decision to postpone indefinitely Palestinian national elections (originally scheduled for May-August), despite strong popular demand that the voting proceed. Resumed high-level political talks between Israel and the PA are a positive, but their mandate is narrow, with Israel’s government having ruled out political negotiations; these talks rather serve primarily to bolster an unreformed PA.

There is a disconnect between the EU’s stated goals in Israel/Palestine and European policies. Together, the bloc and its member states are the PA’s largest international donor. The EU’s ultimate goal in the Israeli-Palestinian conflict is a negotiated two-state solution “that meets Israeli and Palestinian security needs and Palestinian aspirations for statehood and sovereignty, ends the occupation that began in 1967, and resolves all permanent status issues in order to end the conflict”. To this end, it has publicly opposed Israel’s settlement policy and evictions in Sheikh Jarrah, advocated for maintaining the historical framework of understandings governing Jerusalem’s holy sites known as the Status Quo and verbally supported the holding of Palestinian elections. Yet its actions do little if anything either to advance its preferred policy or to hold Israel or the PA accountable for conduct that runs counter to it.

Indeed, the past year suggests that the EU and its member states have settled into a pattern of simply trying to manage the status quo as they see it. In May, following the eleven-day war in Gaza, EU High Representative Josep Borrell said the situation in the enclave had “long been unsustainable”, and reiterated the call for a political solution to the conflict, but added little else. In October, the EU responded to Israel’s terrorism designation of the six Palestinian civil society organisations, some of which have received European funding, with a standard demurral that it had seen no evidence to warrant this move. Brussels condemned the move but took no further action. The tepid response cast a chill on Palestinian civil society and can only serve to strengthen Israel’s sense of impunity. Worse, the European Commission has suspended an EU-funded project of one of the organisations, Al-Haq, the most prominent Palestinian human rights group, despite determining upon review that it had found no “breach of obligations or irregularities”.

European officials appear to have also backed themselves into a corner in their policy concerning the PA. While they support Palestinian elections, their reluctance to confront Israel over allowing Palestinians in East Jerusalem to participate, and perhaps their greater fear that Hamas might win, prevents them from making a stronger push for putting polls on the calendar. Moreover, hemmed in by outdated and counterproductive conditions the Quartet (the U.S., UN, EU and Russia) imposed on Hamas in 2006-2007 – recognising Israel, renouncing violence and accepting all previous Israeli-Palestinian agreements – they hew to a self-defeating no-contact policy toward Hamas that provides the PA with a built-in excuse to avoid elections. Their reliance on the PA as a provider of stable government and a potential peace partner for Israel has encouraged them to close their eyes to the PA’s repressive and authoritarian practices in the West Bank.

The 2021 violence and the European response suggest that, with the Israeli-Palestinian peace process and related 2003 roadmap having lost their relevance after being the focal point of diplomatic attention for years, the EU and its member states need to rethink. Attempting to manage the status quo is tantamount to acquiescing to constant deterioration on the ground and continued violation of Palestinians’ rights, all while the prospect of a two-state solution fades. As concerns Israel, they offer little more than rhetorical opposition to an unfolding de facto annexation they claim to oppose. As concerns the PA, they throw good money after bad by continuing to support a repressive government without conditioning funding on elections and across-the-board reforms.

The responsibility for ending the conflict peacefully, or at least lessening tensions to create an environment in which a better way forward can be envisioned, rests with the main conflict parties. Yet none of these actors is likely to take such steps absent a firmer international line. By staying largely silent, the EU and its member states are, in effect, acquiescing in Israel’s military occupation and de facto annexation of the West Bank. Without more pressure on the PA, political renewal is unlikely to happen. This reality stands in direct contradiction to the aim of reaching a two-state solution or upholding international law – and, indeed, to any chance of a negotiated, durable end to the conflict.

Working with the U.S., the EU and its member states should therefore press for a long-term truce in Gaza, a return to the historical Status Quo in the Holy Esplanade and a halt to eviction orders in East Jerusalem. They should strictly apply the EU’s differentiation policy vis-à-vis Israel and the occupied territories (measures to exclude settlement-linked entities and activities from bilateral relations with Israel), and press Israel to rescind the terrorism designation of the six Palestinian civil society organisations. They should support Palestinian elections under the freest and fairest conditions attainable, including with East Jerusalem Palestinians’ participation. In this connection, they should work with other members of the Quartet to revise the conditions the group imposed on Hamas in a manner that at least allows the group to participate in a unity government, for example by nominating ministers who are not card-carrying Hamas members.

The EU should not just press rhetorically. It should back up its words with actions, focusing in particular on the tools it can use to discourage Hamas’s indiscriminate attacks; Israel’s policies of discrimination, dispossession and de facto annexation; and the PA’s repressive measures targeting individuals and groups that are critical of it. For example, the EU should more consistently and robustly work to ensure that all bilateral arrangements with Israel exclude illegal settlement activity; and use budget support as a tool, not just to press for Palestinian reforms, but also to discourage Israel from placing restrictions on the PA’s access to funds and from banning Palestinian civil society organisations. Very specifically, the European Commission should immediately lift the suspension of EU funding to Al-Haq. Additionally, the European External Action Service and the European Commission should start work on an options paper concerning positive and negative incentives Europe has at its disposal to advance its objectives vis-à-vis Israel and the PA, even if consensus among EU member states around a course of action seems likely to be elusive, as the work would at least help advance the debate in the EU Council on its Israel-Palestine policy.

While important, these steps will not be sufficient, however. The latest bout of fighting offers fresh evidence that the peace process seems increasingly detached from the situation on the ground. The EU and member states should begin thinking about what kind of new international approach might take its place, taking into account that the conflict’s current trajectory is becoming increasingly untenable; that depriving the Palestinian people of a unified national voice by dividing them will lead to neither peace nor surrender; that neither Jews nor Palestinians have a unique claim on self-determination; and that the way forward should be based on the overriding principles of respect for international law and protecting people’s rights in Israel-Palestine, regardless of what form a political solution may take.