For anyone who cares about Israel, this is no time for niceties. What we need now is plain speaking, even pained speaking — and action. For all of Israel’s great achievements in its seven decades of statehood, our country now finds its very future, identity and security severely threatened by the whims and illusions of the ultranationalist government of Prime Minister Benjamin Netanyahu.

In its more than three years in power, this government has been irrational, bordering on messianic. It is now increasingly clear where it is headed: creeping annexation of the West Bank aimed at precluding any permanent separation from the Palestinians.

This “one-state solution” that the government is leading Israel toward is no solution at all. It will inevitably turn Israel into a state that is either not Jewish or not democratic (and possibly not either one), mired in permanent violence. This prospect is an existential danger for the entire Zionist project.

The government realizes that carrying out its one-state plan must entail steps and practices that necessarily clash with Israeli and international law — which is why it has effectively declared war on the Supreme Court of Israel, the free press and civil society, as well as the Israel Defense Forces’ ethical code.

This disrespect for the rule of law permeates other aspects of the government, too. It helps to shield the prime minister, his family and his aides from corruption investigations. Mr. Netanyahu’s Likud Party recently introduced legislation that would explicitly forbid the police from recommending indictments at the end of high-profile investigations. To clear up any question about its intentions, the law would apply even to inquiries that are already open — like the one into the prime minister’s dealings. 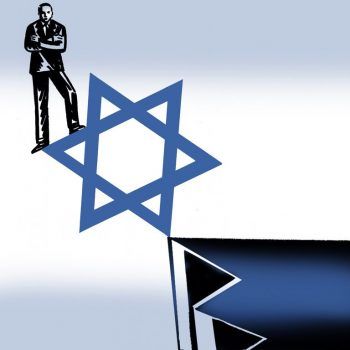 The same inclination toward self-preservation is evident in Mr. Netanyahu’s capitulation to ultra-Orthodox parties on religious issues, damaging Israel’s crucial relationship with American Jews. That relationship has grown even more strained since Mr. Netanyahu reneged on a deal that would have expanded egalitarian prayer space at the Western Wall in Jerusalem, Judaism’s holiest site. This is a longstanding demand for recognition from Reform and Conservative Jews, who together make up about half of the Jewish-American community.

The Middle East is certainly a tough neighborhood. The threats to Israel are real and none can be ignored. Our country, however, has built an “iron wall” of military and economic power that has made us into the strongest player in the region. This accomplishment, together with bipartisan American support, enables Israel to shape its own future.

Despite the right-wing government’s actions, there is a broad consensus among Israelis that rests on three pillars. First and foremost, security comes before everything; every Israeli understands this. Second, the unity, solidarity and integrity of the people take priority over the unity of the land — namely, the wish to possess the entirety of our historic homeland. Third, the principles of the 1948 Declaration of Independence, which lay out a vision for a democratic Israel based on freedom, justice and peace, are the foundation of our country’s de facto constitution.

These pillars should indicate how to proceed toward peace. Accordingly, the Jewish neighborhoods of East Jerusalem and the “settlement blocs” — suburban communities built just across the Green Line, which include some 80 percent of the total settler population — will remain in Israel no matter what. In any future peace agreement, these areas can be offset by land swaps with the Palestinians. Similarly, overall security responsibility in the West Bank will remain in the hands of the Israel Defense Forces as long as necessary.

The entire debate, then, is actually only over the fate of the isolated settlements, fewer than 100 small communities deep in the West Bank, containing around 100,000 settlers. Even if it is not possible to solve the Israeli-Palestinian conflict at this stage — and it probably is not — it is obvious that continued construction in those isolated settlements directly damages Israel’s vital interests. The settlements are a security liability, not an asset. They aim to block the option of a “divorce” from the Palestinians, which the overwhelming majority of Israelis support.

Mr. Netanyahu’s coalition claims to support the three pillars of Israeli consensus but the truth is it is determinedly undermining all three. The prime minister degrades our security rather than enhancing it. He prefers a Greater Israel with an Arab majority, violence and division over a united, self-confident Israel with a solid Jewish majority, together facing whatever challenges may arise. He sanctifies the Land of Israel before the People of Israel. And he systematically erodes Israel’s democracy and liberal norms of governance.

In the service of this agenda, Mr. Netanyahu elevated fake news, alternative facts and whataboutism into art forms in Hebrew, long before those terms gained any traction in English. His government jeopardizes Israel’s very future, while dividing and inciting us against each other and maligning those abroad who genuinely care about Israel. This must be stopped.